The most serious test for any U.S. president is reducing global nuclear dangers. For decades, Republican and Democratic leaders have negotiated agreements to limit and cut nuclear arsenals, worked to curb the spread of nuclear weapons, and sought to reduce the risk of miscalculation and catastrophe.

Since the administration of Ronald Reagan and the end of the Cold War, the United States has drastically reduced the size of its nuclear arsenal. In fact, Republican presidents have cut the arsenal far more aggressively than have their Democratic counterparts. Since 1992, presidents—regardless of political party—have observed a nuclear test moratorium. 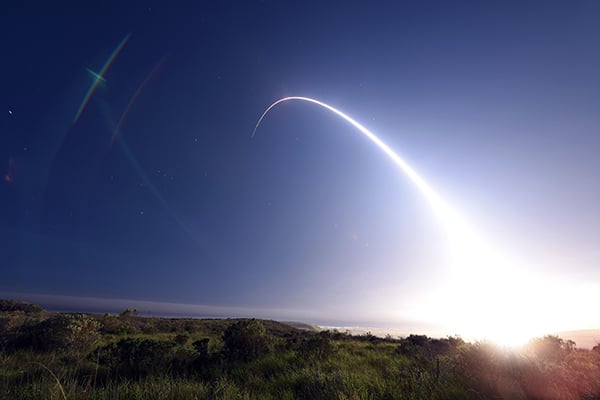 President-elect Donald Trump has made some promising remarks about nuclear policy and some irresponsible comments. He reportedly told Kazakhstan’s President Nursultan Nazarbayev, “There is no more important issue than nuclear disarmament and nonproliferation to be addressed in a global context,” according to a Kazakhstan-isssued statement on their Nov. 30 phone call.

But last month, Trump strongly implied he is contemplating a radical break from decades of bipartisan U.S. policy to reduce nuclear stockpiles and avert global nuclear competition. On Dec. 22, he launched a tweet declaring, “The United States must greatly strengthen and expand its nuclear capability until such time as the world comes to its senses regarding nukes.”

When asked by MSNBC to clarify, Trump reportedly said, “Let it be an arms race. We will outmatch them…and outlast them all.” Incoming White House press secretary Sean Spicer offered an interpretation to NBC News that Trump is sending a “warning” to other countries “that this president’s going to take action.”

If Trump and his advisers really believe nuclear “warnings” and calls for a global arms race are in the interest of the United States, they should think again. History suggests that nuclear threats do not intimidate the likes of Russia, China, North Korea, or terrorist groups. Such bravado is reckless and dangerous. It confuses close allies, undermines global nonproliferation efforts, and motivates adversaries.

The United States already has the world’s most formidable nuclear arsenal. It is on track to spend more than a half-trillion dollars over the next two decades to replace and refurbish delivery systems and warheads. There is no room in the federal budget to “expand” the scope and the cost of U.S. nuclear weapons modernization programs. Pentagon officials have already warned that the plan cannot be sustained without significant cuts to other domestic and military priorities.

There is certainly no need for more nuclear weapons. Today, the United States has about 4,018 nuclear warheads. Under the New Strategic Arms Reduction Treaty (New START), it is allowed to deploy 1,550 strategic warheads. About 900 can be fired within minutes of a presidential decision to do so.

Russia has an arsenal of similar size. But there is only one other potential nuclear adversary, China, that has intercontinental-range missile systems that can reach the United States, and that force is currently armed with fewer than 100 warheads. That is among the reasons why President Barack Obama, with input from the Joint Chiefs of Staff and other elements of the national security establishment, determined in 2013 that the United States can reduce its nuclear force by another one-third below New START levels and still meet deterrence requirements.

Trump, before the end of his term in office, will need to decide whether to invite Russia to extend New START for another five years and/or negotiate a new arms reduction treaty. He should choose to build down, not build up.

The New York Times reported Dec. 28 that Trump’s energy secretary-designate, Rick Perry, will face pressure to develop new, “more usable” types of nuclear warheads, which could require the resumption of nuclear explosive testing. But there is no military requirement for new, battlefield nuclear weapons, and the U.S. nuclear laboratory directors say explosive testing is not required to maintain existing U.S. warheads. That is why the United States and 182 other states have signed and support the 1996 Comprehensive Test Ban Treaty and why Washington helps to finance the Comprehensive Test Ban Treaty Organization’s International Monitoring System to detect and deter clandestine tests even before the treaty enters into force.

Twitter is hardly the appropriate medium for the president-elect to communicate possible changes in U.S. nuclear policy. Trump’s cryptic pronouncements suggest a radical shift in U.S. policy that could accelerate global nuclear tensions and complicate the job of stopping the spread of nuclear weapons, an effort closely linked to the legally binding commitment of the nuclear-armed states to “the cessation of the nuclear arms race at an early date and to nuclear disarmament.”

If Trump hopes to reduce and not increase nuclear dangers, he must maintain the previous bipartisan policy of engaging with Russia to cap and reduce the two nations’ still enormous and deadly nuclear arsenals, strengthen the global taboo against nuclear testing, and bring the world closer to the peace and security of a world without nuclear weapons.