(Washington, D.C.)—Today, the United States and Russia each announced that they have met their obligations under the 2010 New Strategic Arms Reduction Treaty (New START) to reduce their deployed strategic nuclear forces by today’s implementation deadline. 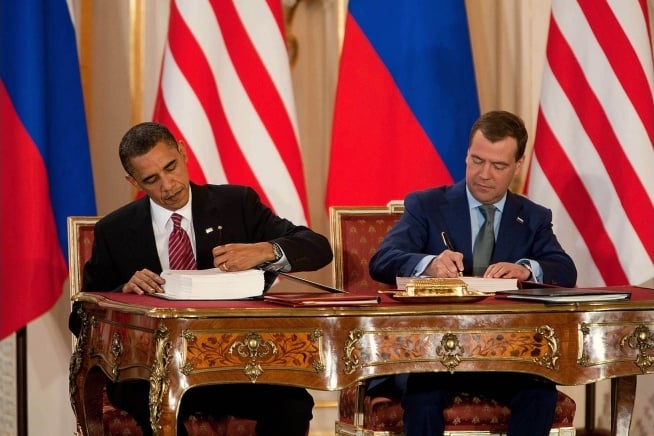 “New START implementation is a significant accomplishment. Through this treaty, the two sides have improved strategic stability, predictability, and transparency, and verifiably trimmed their still oversized nuclear arsenals,” said Daryl G. Kimball, executive director of the Arms Control Association, which advocated for the treaty’s negotiation a decade ago and for its ratification in 2010.

“The next step is for Presidents Trump and Putin to agree to extend the treaty for another five years–to 2026–to avert the possibility of unconstrained strategic nuclear competition between the world’s two largest nuclear actors,” Kimball said.

“At a time when U.S.-Russian relations remain strained, New START serves an even more important role in reducing nuclear risks,” said Tom Countryman, chairman of the board of directors and former acting Undersecretary of State for Arms Control and International Security.

“Continued implementation and compliance with New START, followed by an extension of New START and, if possible, the negotiation of a follow-on agreement, would advance U.S., Russian and international security,” he said.

In a statement published Monday, the State Department said that Washington and Moscow “will exchange data on their respective strategic nuclear arsenals within the next month, as they have done twice per year over the last seven years in accordance with the Treaty.”

In a separate statement issued by the Russian Ministry of Foreign Affairs, Russia announced that as of Monday it deploys 1,444 deployed strategic warheads, 527 deployed strategic delivery systems, and 779 deployed and nondeployed launchers of ICBMs, SLBMs, and heavy bombers.

The treaty is one of the few remaining bright spots in the U.S.-Russian relationship, as both sides have abided by its terms. The U.S. military agrees and continues to strongly support the agreement. Gen. John Hyten, who leads U.S. Strategic Command, told Congress in March that he is a “big supporter” of New START. Hyten added that “bilateral, verifiable arms control agreements are essential to our ability to provide an effective deterrent.”

New START is set to expire Feb. 5, 2021, and can be extended by up to five years without further approval by the U.S. Senate or Russian Duma if both presidents agree. Russian officials have stated that they are open to discussing a five-year extension. The administration’s Nuclear Posture Review released last week does not take a position on the extension of the treaty.

In a January 2017 phone call, Trump responded negatively to a suggestion from Russian President Vladimir Putin that the two countries work to extend the treaty, according to a Reuters report.

“Failing to extend New START would be an unforced and self-defeating error,” Reif warned.

“If the New START is allowed to lapse with nothing to replace it, there would be no limits on U.S. and Russian strategic nuclear forces for the first time since 1972. The United States would have fewer tools with which to verify the size and composition of the Russian nuclear stockpile,” he said.

The deterioration of the U.S.-Russian relationship has only increased the value of New START. Other key pillars of the U.S.-Russia arms control architecture, like the 1987 Intermediate-Range Nuclear Forces (INF) Treaty, are in jeopardy. Since 2014, the United States has accused Russia of testing a type of ground-launch cruise missile prohibited by that accord–a charge that Moscow denies. Bilateral discussions on the matter have not yet resolved the dispute.

Despite the benefits of New START to U.S. security, some Congressional critics of the treaty have tried to block its extension. The House-passed version of the fiscal year 2018 National Defense Authorization Act would have prohibited the use of funds to extend New START unless Russia returns to compliance with the INF Treaty.

“This is senseless and counterproductive. By ‘punishing’ Russia’s INF violation in this way, the United States would simply free Russia to expand the number of strategic nuclear weapons pointed at the United States after New START expires in 2021,” Reif says. “Fortunately, the final version of the authorization bill signed by Trump in December did not include the House language,” he added.

“Extending New START would be an easy win for President Trump,” Kimball said. “It would buy five additional years of much-needed stability, predictability, and transparency. It would help head off unconstrained U.S.-Russia nuclear competition. It would help reassure allies unsettled by both Trump and Putin loose rhetoric on nuclear weapons. And it could serve as a springboard for both sides to pursue further parallel, reciprocal reductions in their still bloated strategic nuclear arsenals, which stand at about 1,550 warheads each.”

“As the possessors of over 90 percent of the roughly 15,000 nuclear weapons on the planet, the United States and Russia have a special responsibility to avoid direct conflict and reduce nuclear risks,” Countryman said. “The downward spiral in relations makes these objectives even more urgent. Extending New START—without either side asking for preconditions—would be an important down payment on a safer and more secure world.”