“[My time at ACA] prepared me very well for the position that I took following that with the State Department, where I then implemented and helped to implement many of the policies that we tried to promote.”
– Peter Crail
Business Executive for National Security
June 2, 2022
Perry, Markey Urge Talks with North Korea to Halt and Reverse Its Dangerous Nuclear and Missile Programs 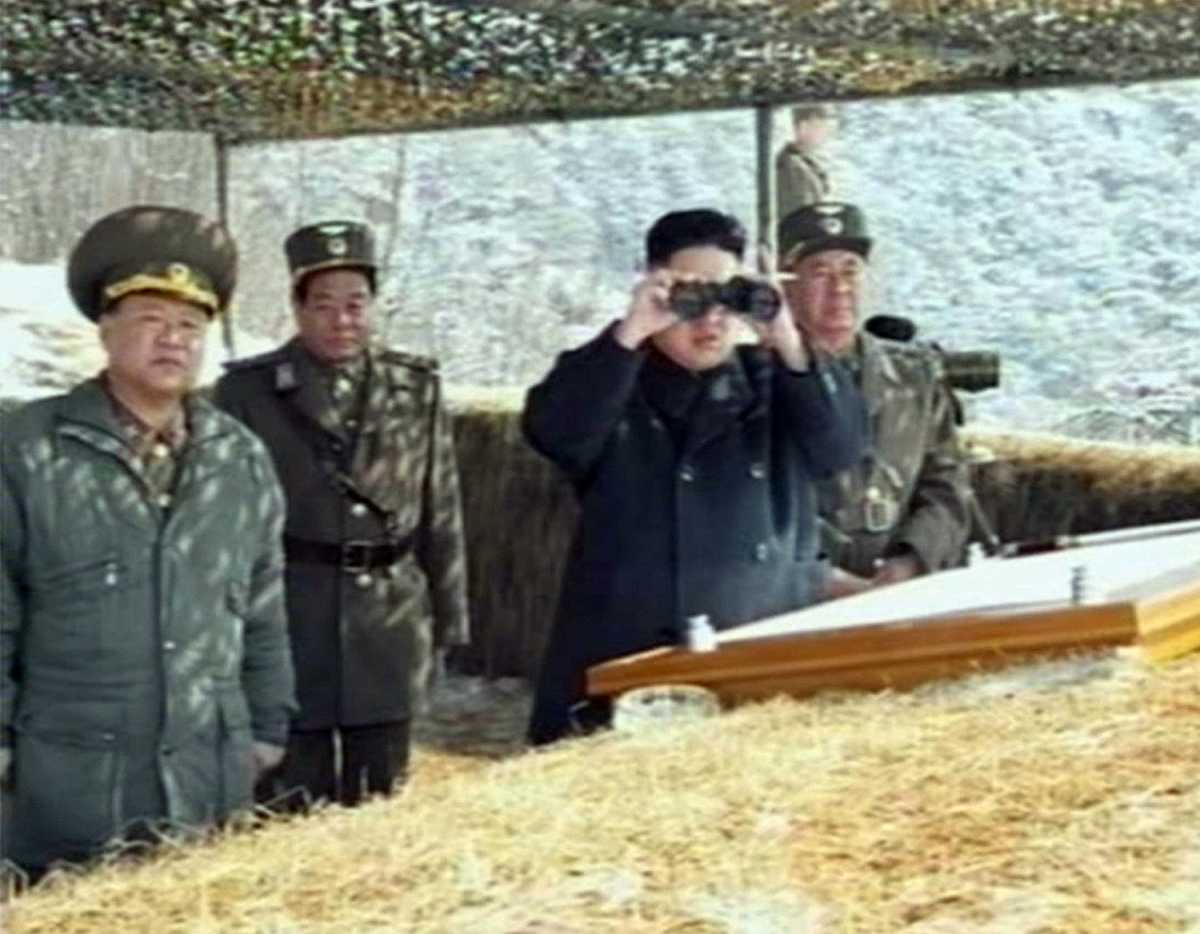 In a teleconference call with reporters convened by the Arms Control Association, Senator Edward Markey (D-Mass.), who is the ranking member of the Senate Subcommittee on East Asia, the Pacific, and International Cybersecurity Policy, along with former Secretary of Defense William J. Perry described their recommended approach. (The audio of the teleconference is available online. A transcript of the speakers' opening remarks is below.)

"President Moon's visit is an historic opportunity for the Trump administration to restart direct negotiations aimed at addressing the nuclear and missile threat from North Korea. The Trump administration should adopt a strategy of active and direct diplomatic engagement with North Korea, backed by rigorous sanction enforcement by China and a robust military deterrence posture in cooperation with our regional partners, especially South Korea." Senator Markey said.

Earlier Thursday President Moon met with senior Congressional leaders including Senator Markey. Last week, a bipartisan group of Senators issues a resolution welcoming President Moon and endorsing a diplomatic approach to achieving a nuclear-weapons-free Korean peninsula and working together for the enforcement of existing sanctions on North Korea.

"Experts with decades of military, political, and technical involvement with North Korean issues, strongly urge the start of discussions with North Korea in the near future. This is the only realistic option to reduce dangers resulting from the current high state of tensions and prevent North Korea’s ongoing development and potential use of nuclear weapons."

"This diplomatic effort should begin with informal talks—with no preconditions—to explore options for more formal negotiations," Perry and his colleagues recommend.

"There is no guarantee diplomacy will work. But there are no good military options, and a North Korean response to a U.S. attack could devastate South Korea and Japan. Tightening sanctions can be useful in increasing pressure on North Korea, but sanctions alone will not solve the problem," Perry cautioned.

"Time is not on our side. Diplomacy should at the top of the list of options on the table," Perry said.

"The June 29-30 summit between Trump and Moon is an opportunity for both presidents to recalibrate and coordinate their approaches toward North Korea," said Daryl G. Kimball, executive director of the Arms Control Association, which hosted the teleconference call.

"A strategy of coercive diplomacy, focused on freezing further nuclear and missile tests, and then ultimately rolling back Pyongyang’s illicit programs, offers the best prospect for success," Kimball said.

Former Secretary of Defence William Perry
[Start 2:30 on the audio, as delivered]

The primary goal of North Korea is extending the Kim dynasty. They have shrewdly done this for many decades (the regime is not crazy as some people think). They are the last Stalinist regime standing and that demonstrates I think, in the view of what has happened to all of the other Stalinist regimes, they have played their cards very shrewdly.

They do have a modest nuclear arsenal and they’re making many more, they have a large arsenal of medium-range ballistic missiles and are developing an ICBM. My judgment is that they will not use their nuclear weapon in the first strike because they know it will mean death to the leaders and great devastation to the country.

Their nuclear weapons therefore are useful but only if they do not use them.

Diplomatic success will contrast with anything we tried in the past: will need new carrots and new sticks than approaches in the past. China has the sticks, and we together with South Korea and Japan have the carrots. So I think we can put together a very attractive approach today compared with the previous attempts.

China, however, in my judgment will not offer those sticks on their own; they will not participate in the diplomatic approach simply on their own. It’s not enough to say to China, “you solve the problem.” We must be able to partner with China and I think if we do that and we do that with quiet diplomacy, we can get China to participate in a meaningful, diplomatic approach.

If we had a diplomatic approach, and if it succeeded, it would have to be in two phases. The first phase being a freeze, which would be valuable in and of itself because it avoids the possibility of North Korea going from the bomb they now have to a hydrogen bomb and it also prevents them from getting an ICBM. A freeze, if successful, would not only would be valuable in and of itself, but it would be a platform for a second phase, which would be the roll back… of their nuclear program. So that’s what I’m recommending.

There is no military solution in North Korea. A second Korean War would be an incomparable tragedy, jeopardizing the lives of hundreds of thousands, even millions of people, and possibly could escalate into a nuclear war.

In March of this year, I sent a letter to President Trump, urging him to take a bold new approach to address the threat from North Korea’s growing nuclear and ballistic missile capabilities. I called on him to adopt a strategy of active and direct diplomatic engagement with North Korea, backed by rigorous sanctions enforcement by China and a robust military deterrence posture in cooperation with our regional partners.

Last year alone, North Korea tested two nuclear devices and carried out numerous ballistic missile tests. It is now accelerating efforts to develop a missile capable of striking the territory of the United States with a nuclear warhead.

These growing capabilities represent a grave threat to the security of the American people, and to our allies and partners in the region.

Existing policy to address this threat has not succeeded. Sanctions and deterrence, while essential, have failed — on their own — to induce the Kim regime to constrain its nuclear and missile ambitions.

Without a direct diplomatic track by the United States, North Korea is likely to continue exploiting divisions in the international community to steadily advance its nuclear and ballistic missile capabilities.

Only a comprehensive strategy of diplomacy — one that brings together economic pressure, military deterrence, and active negotiations — stands a chance of achieving a nuclear-free Korean peninsula.

When Secretary Tillerson told the United Nations Security Council in April that the United States is open to negotiating toward a nuclear free Korean Peninsula, and the Trump adminisration announced its strategy of, quote, “maximum pressure and engagement” I was hopeful that level heads had prevailed.

But General McMaster’s remarks could indicate that the President has veered back onto a dangerous war path. And President Moon’s visit could not come at a more critical time.

President Moon’s visit is an historic opportunity for the Trump administration to restart negotiations aimed at addressing the nuclear and missile threat from North Korea.

President Moon made direct engagement with North Korea a core part of his electoral platform, and a recent survey showed that more than three-fourths of South Koreans want a resumption of dialogue with the North.

China has also wanted the United States to launch direct talks with North Korea for many years, so direct diplomacy could make it easier to get China to enforce sanctions and pressure North Korea to negotiate seriously on denuclearization.

If the Trump administration is serious about its strategy of pressure and engagement, it must strengthen existing sanctions and bolster deterrence. But it must also reach out to North Korea to begin talks aimed at constraining, rolling back, and ultimately eliminating its nuclear and missile programs.

Without diplomacy, however, pressure is unlikely to succeed. I reiterate my call for Donald Trump to stop what looks like a rush to catastrophic war and to get serious about implementing the strategy his administration announced – to pressure North Korea into engagement and negotiate denuclearization of the Korean Peninsula.