(Washington, D.C.) – An effective new tool for improving global nuclear security is in danger of being lost, according to a new report by the Arms Control Association (ACA) and Partnership for Global Security (PGS). The report concludes that regular, voluntary commitment-making by states has resulted in many of the Nuclear Security Summits’ most important accomplishments, but it is not clear if world leaders will choose to preserve this tool after the six-year summit process ends on April 1. 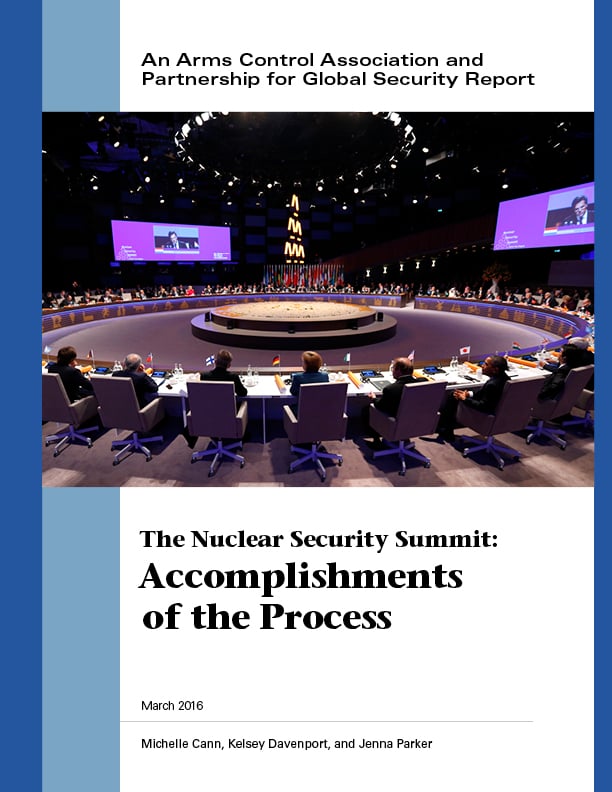 The new report from ACA-PGS features 53 country profiles that demonstrate how the summits’ political momentum and commitment-making model has resulted in meaningful actions by all of the participating countries. Every state has made at least one national commitment to strengthen nuclear security and some countries have been prolific in their pledges, particularly Canada, Japan, Kazakhstan, Netherlands, Norway, Philippines, Republic of Korea, Spain, United Kingdom, and United States. Additionally, more than 90 percent of the participating countries issued voluntary, national progress reports detailing how they were implementing their responsibilities and breaking an important taboo against information sharing.

“Nuclear security commitment-making and progress reporting has been a powerful combination for achieving results at the Nuclear Security Summits,” said Ms. Michelle Cann, Director of Operations and Projects at PGS and report co-author. “The steps that leaders take to preserve these tools at the 2016 summit will be important for the legacy of the process and the future of the global nuclear security system.”

Among the summits’ chief accomplishments are the recovery or elimination of more than 1,500 kilograms of highly-enriched uranium and separated plutonium, the establishment of dozens of new training and support centers, and updates to national laws on nuclear safety and security by most states. The report also proposes that the commitment-making model of diplomacy developed at the summit has itself become a central summit outcome, pointing to its adapted use at the most recent climate conference in Paris.

“Sustainability is the key issue at the 2016 summit,” according to Ms. Kelsey Davenport, ACA’s Director of Nonproliferation Policy and report co-author. “We cannot afford to let nuclear security fall off the political radar with so many challenges still facing the system.”

“There are no international standards and minimum information sharing or review mechanisms built into the global nuclear security system,” said Ms. Jenna Parker, PGS’ Nuclear Security Analyst and report co-author. “These are complicated issues, but the urgency of confronting them is rapidly increasing in today’s decentralized threat environment.”

The full report, The Nuclear Security Summit: Accomplishments of the Process, is available online.

The Partnership for Global Security mounts a global effort to strengthen global nuclear security governance and promotes practical policies to ensure all nuclear material and facilities are secure.