Nearly a decade of efforts to bring the Strategic Arms Reduction Treaty (START) II into force ended in June 2002, a month after the United States and Russia concluded negotiations on the Strategic Offensive Reductions Treaty (SORT).

SORT stipulates a 1,700-2,200 deployed strategic warhead ceiling for both countries' nuclear arsenals. The SORT limit effectively supersedes START II's cap of 3,000-3,500 warheads for each side. For more detailed information on the START II agreement, see: START II and Its Extension Protocol at a Glance. 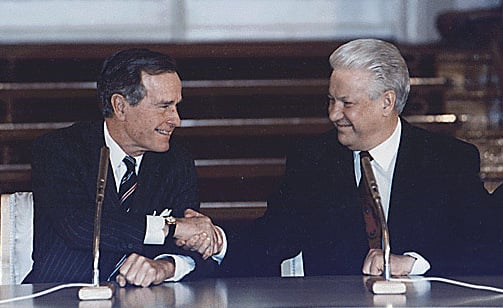 January 15, 1993: President Bush submits START II to the Senate for advice and consent.

March 20-21, 1997: Presidents Bill Clinton and Boris Yeltsin address a number of arms control issues during their summit meeting in Helsinki. In a "Joint Statement on Parameters on Future Reductions in Nuclear Forces," the presidents agree to extend the deadline for the elimination of strategic nuclear delivery vehicles under START II by five years and to immediately begin negotiations on a START III treaty once START II enters into force (subsequently modified to occur once START II is ratified). They also agree that START III negotiations will include four basic components: (1) a limit of 2,000-2,500 deployed strategic nuclear warheads for each side by the end of 2007, (2) measures relating to the transparency of strategic nuclear warhead inventories and to the destruction of strategic warheads, (3) extension of the current START agreements to unlimited duration, and (4) deactivation of all strategic nuclear delivery vehicles to be eliminated under START II by the end of 2003.

September 26, 1997: Codifying commitments made at Helsinki, Secretary of State Madeleine Albright and Russian Foreign Minister Yevgeny Primakov sign a protocol in New York extending the deadline for the elimination of strategic nuclear delivery vehicles under START II from January 1, 2003, to December 31, 2007. In an exchange of letters, Albright and Primakov also agree that once START II enters into force, the United States and Russia will deactivate all strategic nuclear delivery vehicles to be eliminated under the treaty by December 31, 2003, "by removing their nuclear reentry vehicles or taking other jointly agreed steps." Primakov's letter also states that Russia expects that START III will "be achieved" and enter into force "well in advance" of the START II deactivation deadline.

December 25, 1998: In response to the December 16-19 U.S.-British air strikes against Iraq, the Duma postpones a scheduled vote on START II ratification.

April 2, 1999: The Duma postpones a scheduled vote on START II ratification to protest NATO's bombing campaign against Yugoslavia, which started March 24 after Serbia refused to halt military actions against Kosovar Albanians seeking autonomy. (Moscow has historically allied itself with Serbia.)

December 13, 2001: U.S. President George W. Bush issues a six-month notice to withdraw from the 1972 Anti-Ballistic Missile (ABM) Treaty, stating, "I have concluded the ABM Treaty hinders our government's ability to develop ways to protect our people from future terrorist or rogue-state missile attacks."

June 14, 2002: Russian President Vladimir Putin declares that Russia is no longer bound by its signature of START II, ending his country's efforts to bring the treaty into force.