Iran has been subjected to fairly comprehensive U.S. sanctions since the early 1980s for a variety of reasons, including the regime’s support for terrorism, human rights violations, and proliferation concerns.

Additionally, since the UN Security Council took up the Iran nuclear file in 2006, Iran has been subjected to increasingly rigorous multilateral sanctions aimed at encouraging compliance with its nuclear nonproliferation obligations and addressing international concerns about the nature of its nuclear program. These sanctions focus on preventing Iran from acquiring the technologies and materials needed for its nuclear and missile programs by requiring all countries to restrict sensitive exports to Iran. The sanctions geared toward slowing Iran’s nuclear and missile programs appear to be increasingly effective as additional countries strengthen controls over exporting sensitive goods to Iran. But they have not prevented Iran from improving its domestic capabilities nor led Iran’s leadership to abandon the pursuit of a nuclear weapons capability.

U.S.-led sanctions have increasingly targeted the Iranian energy sector, the most critical part of its economy, to impose economic pressure on Iran in the hopes of influencing the decision-making of Iran’s leadership. More recently, the Iranian banking sector has been targeted by sanctions designed to isolate it from the global financial system by both the United States and the European Union.

Sanctions should remain an important component of efforts to demonstrate to Iran that it has nothing to gain and much to lose from its current nuclear ambitions, but sanctions will not be enough to end any nuclear aspirations.

The UN Security Council first resorted to employing sanctions in 2006 when Iran refused to comply with a binding resolution that required, among other measures, that Iran suspend all uranium-enrichment and heavy-water-related activity. Three other resolutions tightening sanctions followed, with a June 2010 resolution introducing some of the most sweeping measures against Iran to date. Taken together, sanctions introduced under these resolutions prohibit Iran’s access to proliferation-sensitive items, technical assistance, and technology. The resolutions also target designated Iranian entities and persons involved in the nuclear and ballistic missile activities that are barred by the resolutions. 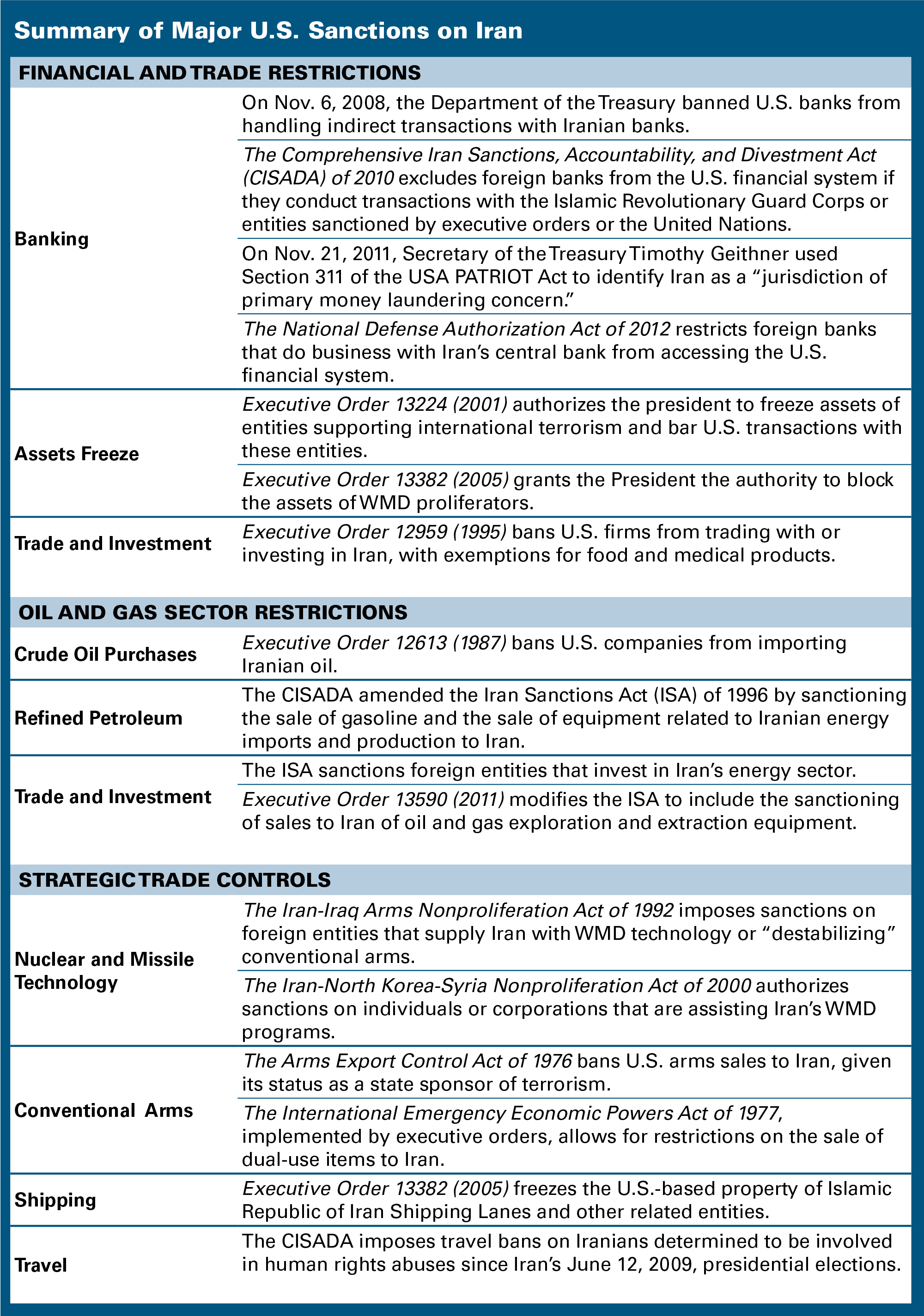