Inside the Arms Control Association
August 2022

Russia's ongoing, large-scale war on Ukraine has not only increased human suffering and reminded the world of the risks of nuclear weapons, nuclear threats, and nuclear deterrence, but it has also derailed talks that could lead to new arrangements to maintain verifiable caps, or perhaps reduce, the world’s largest nuclear arsenals–until, perhaps, now.

Building on his letter to the Arms Control Association on June 2, U.S. President Joe Biden issued a statement Aug. 1 at the start of the 10th NPT Review Conference in which he declared:

"Even at the height of the Cold War, the United States and the Soviet Union were able to work together to uphold our shared responsibility to ensure strategic stability. Today, my Administration is ready to expeditiously negotiate a new arms control framework to replace New START when it expires in 2026. But negotiation requires a willing partner operating in good faith."

The call for further nuclear arms control negotiations has been welcomed by dozens of states at the NPT Review Conference, which is convening this month at the United Nations in New York.

Biden’s call for talks was greeted with a mixed reaction from Russia, which says it supports New START and talks on follow-on agreements but wants additional details from the Biden administration on its proposal for talks. Ongoing haggling between the two sides over resuming New START inspections (which were suspended in 2020 due to Covid) is adding an additional layer of complexity.

As I wrote in a new essay in The Nation magazine earlier this week, “Given that the war could drag on for many more months, and with time running short on New START, now is the time for each side to test each other’s seriousness by immediately resolving differences blocking the restart of New START inspections and agreeing to begin negotiations, without conditions, on new arms control arrangements to supersede New START.”

Much as we did to rally support for the extension New START in 2021, you can count on ACA to play a leading role to build support and ideas for the resumption of negotiations to maintain common sense, ideally lower, limits on the world’s two largest nuclear arsenals. Our campaign won’t be easy or quick, but it is winnable and it is necessary to walk the world back from the nuclear brink.

Please consider pitching it to support our efforts. And thanks in advance.

States-parties to the 1968 Nuclear Non-Proliferation Treaty (NPT) finally convened Aug. 1 for the pandemic-delayed 10th Review Conference for the treaty, which is a cornerstone of the effort to maintain international peace and security. 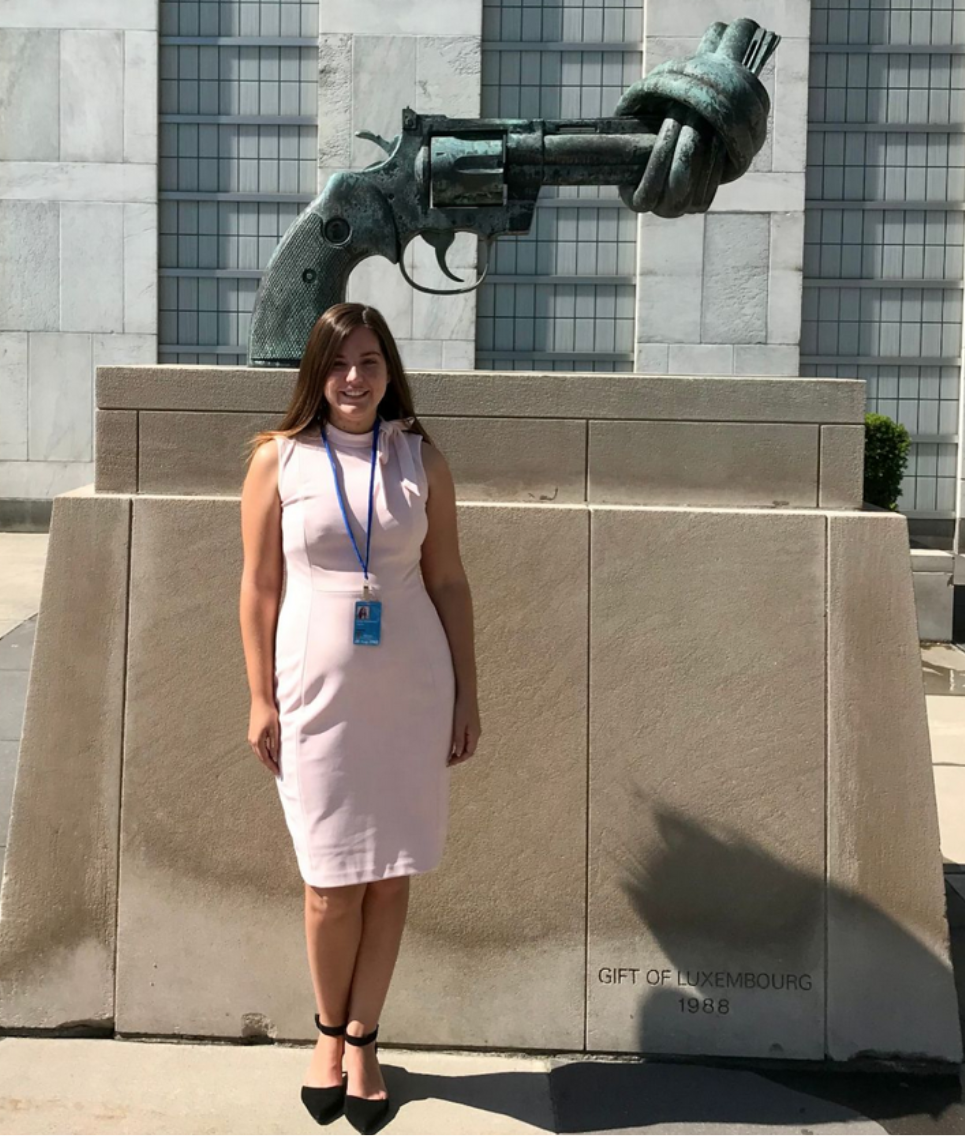 The review conference caps a five-year cycle of meetings in which states-parties review compliance with the NPT and seek agreement on steps to advance the treaty’s main goals:

For a summary overview of key developments and debates at the Review Conference, see our timely, twice-weekly updates on key developments through our ArmsControlNow blog written by ACA’s research associate Gabriela Iveliz Rosa Hernández (left). The conference will conclude on Friday, Aug. 26.

Team ACA has been on the ground at the conference to meet with key governmental delegations, speak at expert side events and panel discussions, and press for meaningful outcomes.

On Aug. 4, Mayors for Peace Secretary-General Takashi Koizumi and Nagasaki Mayor Tomihisa Taue met with Daryl Kimball to exchange views on the ways to advance nuclear disarmament, and non-proliferation, and to achieve a world free of nuclear weapons. 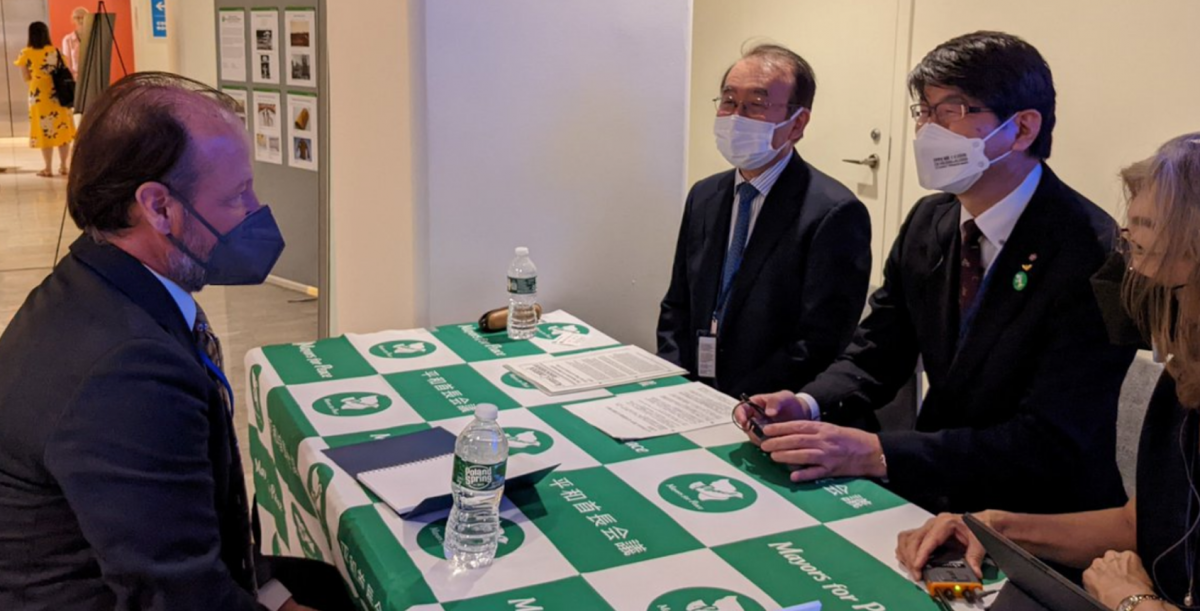 ACA also co-organized one of the formal NGO statements delivered to the conference on Friday, Aug. 5. The statement, titled “The Necessity of a Meaningful Action Plan on Article VI of the NPT,” was endorsed by a diverse global coalition of 37 major disarmament organizations and leaders, including the International Campaign to Abolish Nuclear Weapons and others.

In our statement we argued: “Clearly, the nuclear arms reduction process envisioned by the NPT regime is currently not working. The deficit in disarmament diplomacy and the growing nuclear danger mean that this is no ordinary NPT Review Conference. Now is the time to bolster the disarmament pillar of the NPT.”

The NPT conference agenda, working papers from delegations, and plenary session speeches are available on the official UN NPT conference website. Most open sessions will be broadcast via UN WebTV. Additional resources, including the NGO statements, are online here courtesy of Reaching Critical Will.

For more on the history of past NPT Review Conferences, see our annotated "Timeline of the Nuclear Nonproliferation Treaty (NPT).”

Job Opportunity with the Physicists Coalition for Nuclear Threat Reduction

Beginning Oct. 1, ACA will become the host and partner for the Physicists Coalition for Nuclear Threat Reduction, a growing network founded in 2020 by Princeton’s Program on Science and Global Security with support from an American Physical Society Innovation Fund grant and a major grant from the Carnegie Corporation of New York.

The Physicists Coalition involves over 800 physicist-advocates and supports dozens of expert colloquia each year on nuclear arms control issues at physics institutions across the country to deliver information and foster action on nuclear policy and disarmament issues at local and national levels.

Please see the position announcement for further details and please help spread the word about this great opportunity to help make a difference. The application deadline is Aug. 18.