With two out of three munition-specific destruction campaigns completed and a new proposal to accelerate the destruction of all remaining munitions, the Pueblo Chemical Agent-Destruction Pilot Plant (PCAPP) is on its way to meeting the 2023 chemical weapons stockpile elimination deadline.

When the United States ratified the Chemical Weapons Convention in 1997, it accepted the treaty mandate to eliminate its chemical weapons stockpile and related facilities completely and verifiably by April 2007, with the posibility of a five-year extension until 2012.

But both the 2007 and the 2012 deadlines proved to be severe underestimates of the time and effort needed to safely demilitarize all nine declared U.S. chemical weapons stockpiles. The United States requested and recieved two additional deadline extensions from the international chemical weapons watchdog, the Organization for the Prohibition of Chemical Weapons (OPCW).

Now, the United States is pushing hard to finish destroying the last vestiges of its once-massive Cold War-era chemical weapons stockpile by September 30, 2023.

Unlike the 105mm and 155mm campaigns, during which projectiles were robotically dismantled in the main plant and mustard agent underwent neutralization and biotreatment, the final campaign was slated to employ Static Detonation Chamber technology to eliminate the 4.2-inch mortar rounds.

Assembled Chemical Weapons Alternatives, the government body that oversees destruction operations at the Colorado site, explained in a 2016 press release that processing 4.2-inch mortar rounds in Static Detonation Chambers, rather than in the main plant, was necessary in order to improve worker safety and to ensure the United States completed the destruction of the stockpile by 2023. 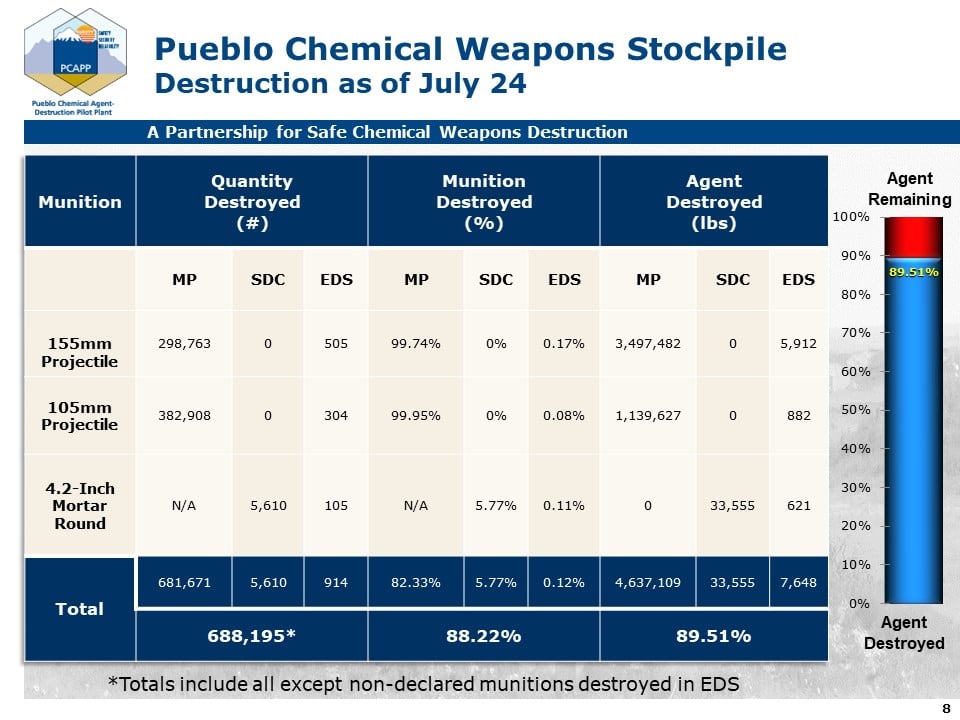 Static Detonation Chambers eliminate the need for munition disassembly as well as the need to drain the agent from the projectile. Instead, the entire munition is loaded into a feed box and is carried by conveyor belt into a heated containment vessel, whereupon the agent and projectile are destroyed by thermal decompression. The entire process allows for minimal processing by humans, thus reducing personnel safety risks.

The detonation chambers are also capable of operating 24/7. Chemical munitions are stored in earth-covered service magazines close to the three sites to allow for continued operations at night, on the weekends, and during holidays.

Construction and testing for three Static Detonation Chamber sites at the Pueblo chemical destruction facility has concluded, and 5,610 4.2-inch mortar rounds (or 5.77% of the total number of mortar rounds at the site) have been eliminated thus far.

According to Kevin Mackey, Hazardous Waste Permitting unit leader at the Colorado Department of Public Health and Environment, the three sites will eventually operate at 6 rounds per hour per site. In the meantime, plant employees have been able to feed projectiles into the operating Static Detonation Chambers sites for about 20 hours a day - also referred to as a site’s “uptime” - at the current post-trial burn rates. At the current rates, the three sites are processing approximately 100 mortar rounds per day.

If all three Static Detonation Chambers operate at their maximum throughput rate of 6 munitions per hour and maintain a 20-hour uptime, the three sites will be able to process 360 mortar rounds per day. Taking into account the 5,610 mortar rounds already destroyed, there are roughly 92,000 mortar rounds left to be eliminated from the Colorado Chemical Depot. At a rate of 360 mortar rounds per day, Pueblo could complete stockpile destruction in approximately 8 to 9 months - a campaign completion date well within the treaty deadline.2 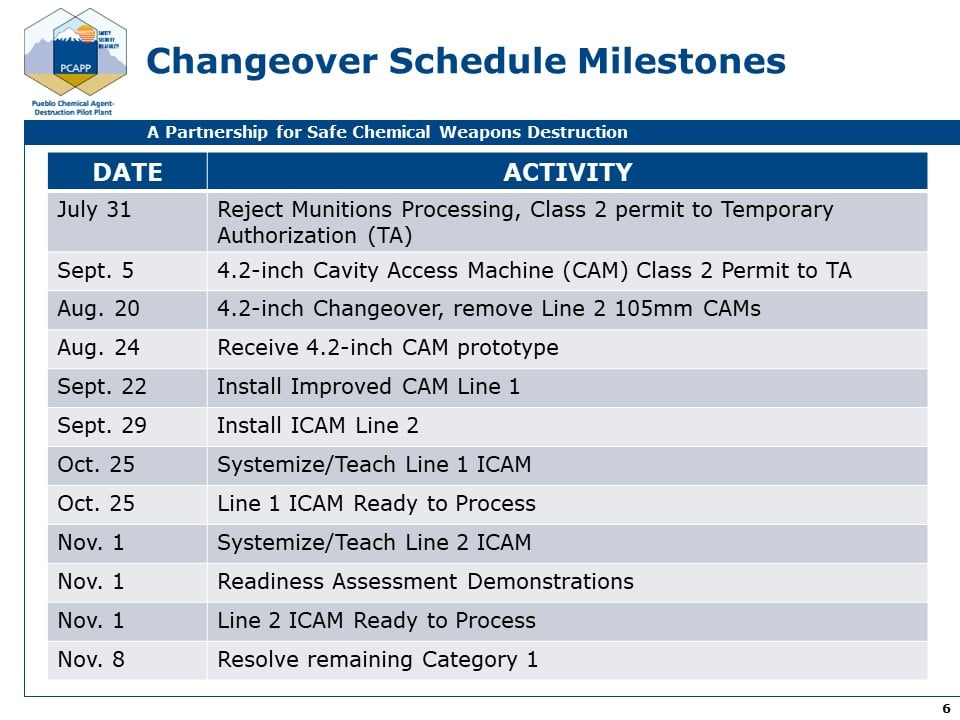 This timeline, though, would only be maintainable if there were no delays caused by technical issues, worker accidents, equipment maintenance, or other potential disruptions.

However, at an April 27 public meeting of the Colorado Chemical Demilitarization Citizens’ Advisory Commission, Walton Levi, PCAPP site project manager, announced a new plan to process some of the 4.2-inch mortar rounds in the main plant in addition to the Static Detonation Chambers - a positive change that will alleviate some of the uncertainty around meeting the deadline.

“We can run 4.2s in the main plant: that gives us some greater certainty that we will meet the treaty deadline,” Levi said during the meeting.

The main plant used an automated process to drain the 155mm and 105mm projectiles and treat the chemical agent stored inside - a process for which 4.2-inch mortar rounds have been previously found to be “unsuited.”

Levi's announcement seems to mark a change in that former assessment. According to Levi, work is already underway in planning out a modified machine part called an Improved Cavity Access Machine (ICAM) that would allow the 4.2-inch mortar rounds to be processed safely and efficiently in the main plant.

“The major difference is the 155s and 105s use gravity to drain out the munitions after being washed out. These [4.2-inch mortar rounds] will be inverted so we’ll use a negative pressure or vacuum system to accomplish that same feat,” Levi said.

He explained that due to the success of the 105mm projectile campaign, which was completed on July 20, PCAPP has a window of 7 to 8 months of time to operate 4.2-inch mortar demilitarization in the main plant that was not previously anticipated.

Mallory Stewart, Assistant Secretary of State for Arms Control, Verification, and Compliance, recently visited the Colorado facility to congratulate all those who contributed to the successful conclusion of the 105mm campaign and to underscore the importance of meeting the treaty deadline.

“Continuing to ensure the steady progress to meeting the deadline of complete destruction of all of U.S. chemical weapons by September 2023 is obviously an important commitment for all of us, but we know how helpful it has been to have the guidance and expertise and advisory capacity of this group to keep us on the straight path to success,” she said. “The implications of failing to meet that deadline would be extraordinarily critical and challenging for us to deal with diplomatically.”

The U.S. chemical weapons destruction program began in 1990 on Johnston Atoll in the Pacific Ocean, and seven of nine declared chemical weapons stockpiles across the United States have been safely destroyed over the last 32 years. The remaining two stockpiles in Pueblo, Colorado and Blue Grass, Kentucky accounted for about 10% of the 31,500 U.S. tons of deadly chemical agents declared by the United States to the Organization for the Prohibition of Chemical Weapons (OPCW). The United States has now destroyed about 98% of this tonnage, with the final 2% remaining at Pueblo and Blue Grass. The seven other nations that have declared stockpiles to the OPCW have completed destruction activities.

2. The estimate of approximately 255 days, or around 8 to 9 months, assumes that all three SDCs will maintain a rate of 6 munitions processed per hour and operate for at least 20 hours a day, 7 days a week.