Authored by Daryl Kimball and Kathy Crandall Robinson on March 18, 2022

President Vladimir Putin has chosen the path of destruction instead of diplomacy. The Kremlin’s war on Ukrainian cities, towns, nuclear power stations, hospitals, and civilians is indefensible, illegal, premeditated, and heartbreaking.

Making matters worse, Putin’s nuclear saber-rattling is raising the risk of escalation in ways we have not seen since the end of the Cold War.

If NATO and Russian military forces become entangled in the fight, the war could widen further and could potentially move to the nuclear level–with catastrophic consequences.

Since Putin’s decision to invade Ukraine, our team has:

How long Russia’s war on Ukraine will last and how it will end is not clear. What is clear is that we face a prolonged period of tension with the Putin regime.

Unless we can persuade key leaders to make the right choices, we face the prospect of nuclear arms racing without arms control guardrails and the heightened risk of nuclear weapons use.

In an interview on March 1 with MSNBC news anchor Katy Tur, I noted that “until we get rid of these weapons we are going to be living with these risks.”

My response: "It should" and, it must. And how that debate turns out will depend on how we all respond in this dangerous moment in history.

In the days, weeks, months, and years ahead, we need to make sure we don’t lose sight of the fact that it is war and the threat of nuclear war that are our common enemies.

Please consider helping the Arms Control Association continue to be a leading voice in the conversation, so we can get back on the right path.

In a new ACA Issue Brief, Senior Policy Analyst Shannon Bugos and Daryl Kimball provide answers to frequently asked questions about "Russia’s War on Ukraine and the Risk of Nuclear Escalation.” The paper has also been translated into a spanish-language version to reach a wider set of audiences.

The March issue of Arms Control Today, includes in depth coverage including: 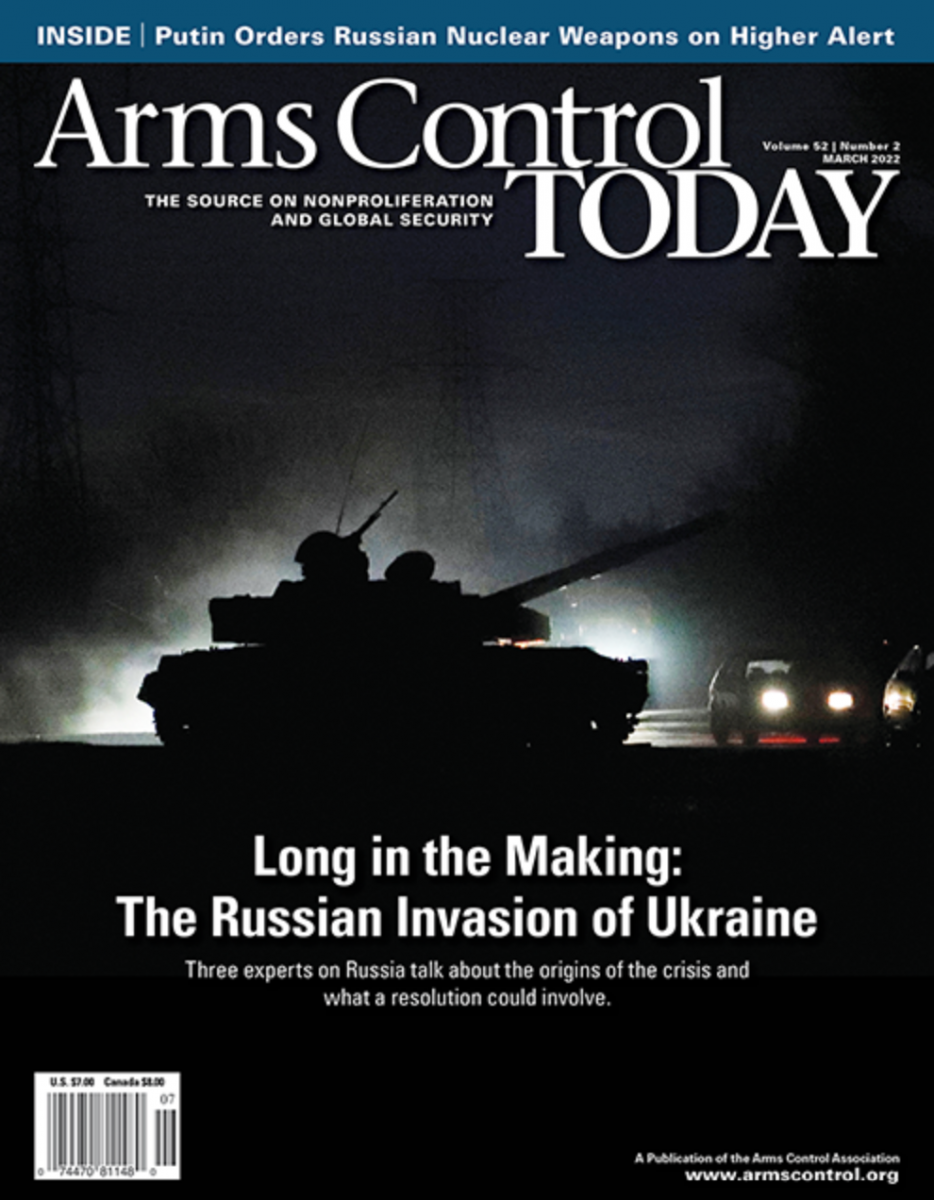 In an article published March 11 in the Bulletin of the Atomic Scientists, “How to avoid nuclear catastrophe—and a costly new arms race“ Daryl Kimball breaks down what is at stake, what could go wrong, and what can be done to move us away from the nuclear brink.

Deal to Restore JCPOA Is Close; Debate in Congress Looms

After nearly a year of on-and-off indirect multilateral negotiations to restore U.S. and Iranian compliance with the Joint Comprehensive Plan of Action (JCPOA), the parties are nearing a win-win solution.

According to senior U.S. officials, there are a few issues that must still be sorted out, but a deal is “doable” in the coming days.

Unfortunately, some in Congress are threatening to try to block the agreement. If these opponents succeed, it is possible, and maybe even probable, that Iran would become a threshold nuclear-weapon state. We can expect an intense debate in the coming weeks over a vote on a potential joint resolution of disapproval, which would require 60 votes in the Senate to override a veto.

For more on what’s at stake, see our Issue Brief “The Logic of Restoring Compliance with the 2015 Iran Nuclear Deal.”

Please join us at the National Press Club in Washington, D.C. on June 2 for our 2022 Annual Meeting, which arrives 50 years after ACA became an independent, non-profit organization. We’ll review our five decades of accomplishments, examine today’s pressing arms control challenges, hear from ACA friends and alumni, and discuss what we need to do to enable ACA to take on the challenges of tomorrow. Following our meeting, we will gather for an informal garden reception.

For more information and to register, see: www.armscontrol.org/armscontrol2022. We hope you will join us and also consider becoming a 50th Anniversary sponsor.

Earlier this month, our reliable and hard-working Arms Control Association research associate Julia Masterson left ACA to join the U.S. State Department to work in the office of Arms Control, Verification, and Compliance.

She joins other former ACA staff who have continued their arms control careers at State, including our former research analyst Peter Crail, former research Director Wade Boese, and our former Scoville Peace Fellow Maggie Tennis, among others. Such departures are always bittersweet, but we are proud to see her move into a position where she can continue to make a difference.

We welcome a new research associate beginning April 4: Gabriela I. Rosa-Hernández. She holds a Master’s degree in Central European, Russian, and Eurasian Studies from the University of Glasgow, and has previously worked with the Foreign Policy Research Institute, the International Crisis Group, the U.S. Department of Defense, the Baltic Defense College, and the University of Maryland as a research assistant and intern.

Our communications and policy team has been very busy in recent weeks. Here is a partial list of our work with journalists to help inform the debate.