Last month, after lengthy deliberations and debate, the House of Representatives voted on its version of the fiscal year 2020 National Defense Authorization Act (NDAA). The bill incorporates a number of provisions, supported by the Arms Control Association, that would place a much-needed check on the Trump administration’s unnecessary, unsustainable, and unsafe nuclear weapons plans.

The House version of the defense authorization bill:

Just as importantly, the bill includes a prohibition on funding for any use of military force in or against Iran unless Congress has declared war or in the event of a national emergency created by an Iranian attack upon the United States.

By passing the legislation, the House greatly increases its leverage to retain these and many other important provisions in upcoming conference negotiations with the Republican-controlled Senate.

Our work on these and other initiatives is hardly over. With the support of our members, we’ll continue to press Congress to provide a much-needed check on U.S. policy and to help pave the way for sensible strategies to reduce weapons-related security threats.

Thank you for your support and engagement!

A Critical Evaluation of the Trump Administration's Nuclear Weapons Policy

Join the Arms Control Association in Washington this Monday, July 29 for a briefing titled, “A Critical Evaluation of the Trump Administration’s Nuclear Weapons Policies,” to discuss the Trump administration’s nuclear strategy with leading analysts, former government officials and military leaders.

The panel will assess the Trump administration’s policies on nuclear weapons spending, U.S.-Russian nuclear arms control, and the 2015 Iran nuclear deal and nuclear diplomacy with North Korea—and offer recommendations for a more responsible and effective approach. 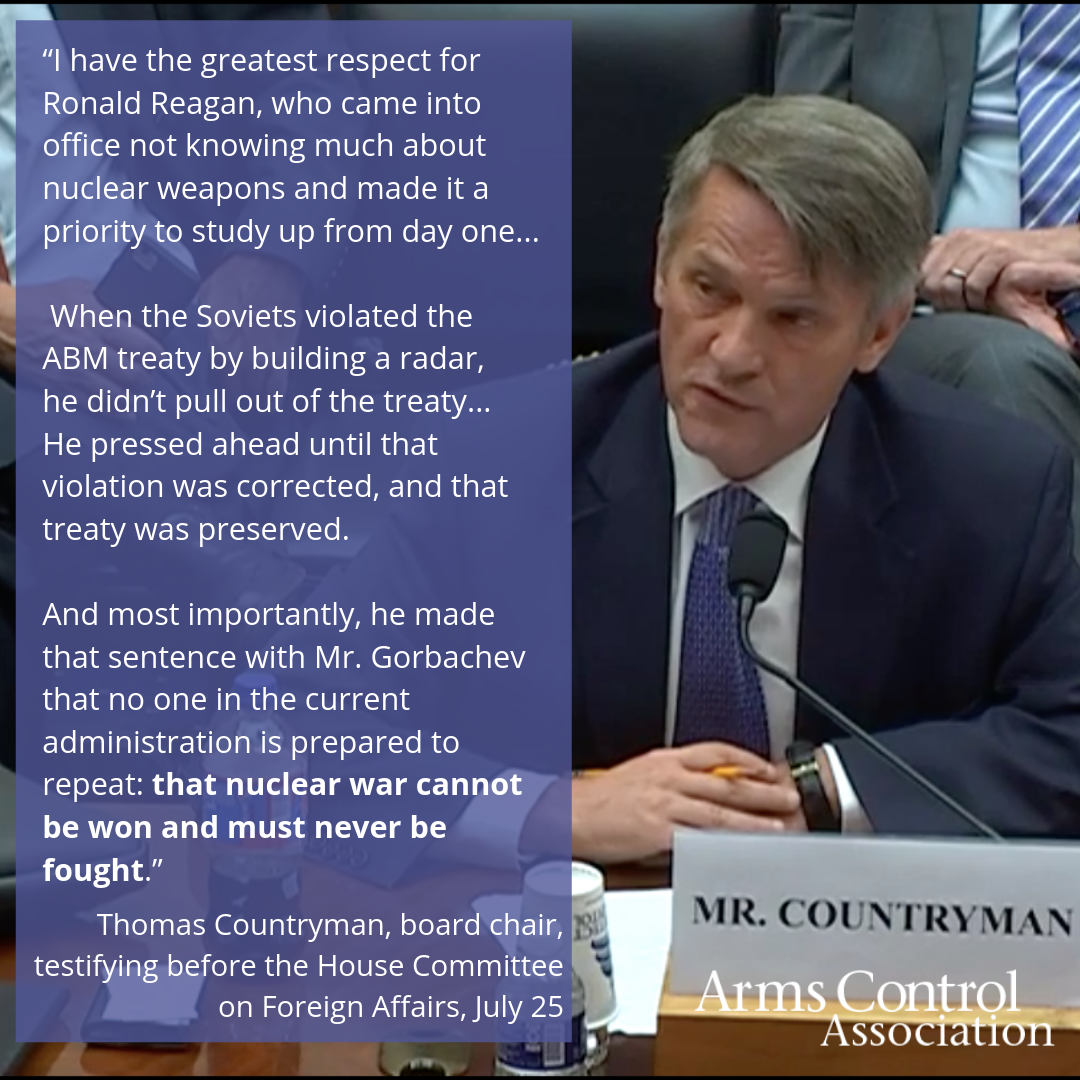 The Trump administration has delayed any action on extension of New START and has proposed instead negotiating an expanding of New START to include China as a party, and to set new limits on nonstrategic (tactical) nuclear weapons, which are not covered by the New START agreement.

“Pursuing talks with other nuclear-armed states and trying to limit all types of nuclear weapons is an admirable objective, which I support in principle,” Countryman said before the subcommittee.

“Such a negotiation would be complex and time-consuming. There is no realistic chance a new agreement along these lines could be finalized before New START expires. It would be national security malpractice to discard New START in the hopes of negotiating a more comprehensive, ambitious nuclear arms control agreement with Russia and China to say nothing about getting it ratified and into force.”

Countryman’s full remarks and video of his testimony are available on our website at https://www.armscontrol.org/events.

This summer we said our goodbyes to a key member of our policy staff who is moving on to the next phase in her career, and we welcome two new research analysts to our research and policy team. 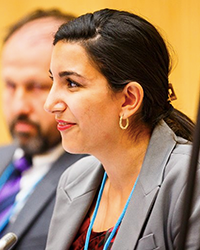 Shervin Taheran has been an invaluable member of the staff for nearly five years. Shervin joined the Association in 2014 as a program associate, where she helped manage member engagement, organized the annual membership conference and the Arms Control Association’s congressional staff briefing series with The Lugar Center.

Shervin became a research assistant in 2018, contributing research, analysis, and reporting on nuclear disarmament, U.S.-Russian nuclear arms control, the defense budget, and threat reduction policy. She also provided information and analysis for our Project for the CTBT and she was a key leader of the CTBTO Youth Group, a growing international network of young scholars dedicated to advancing knowledge about nuclear testing and the test ban.

Shervin will be beginning law studies at Georgetown University and a nuclear security fellowship on Capitol Hill in the fall. 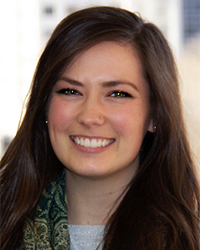 Shannon Bugos began as the Association’s new research assistant in July and will be focusing on U.S.-Russian arms control, defense budget, and missile defense policy. Shannon joins us from her prior role as the communications and writing manager at Truman Center for National Policy and Truman National Security Project, assisting members and senior staff in media outreach and message development. She graduated from the University of Notre Dame with a Bachelor’s in Peace Studies, English, and Business Economics. 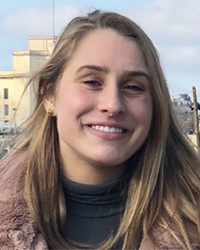 The Arms Control Association is looking forward to welcoming Julia Masterson on staff in September as our second research assistant after she completes her master’s degree in nonproliferation and international security from King’s College London.

Julia’s research and reporting will focus on nuclear and missile non-proliferation and chemical weapons and the Chemical Weapons Convention. Julia previously interned with the National Security Archive, where she helped chronicle the diplomatic proceedings culminating in the 2015 Joint Comprehensive Plan of Action. She later held research and administrative roles at the National Defense University Center for the Study of Weapons of Mass Destruction where she focused on strategic stability by way of bilateral and multilateral treaties. 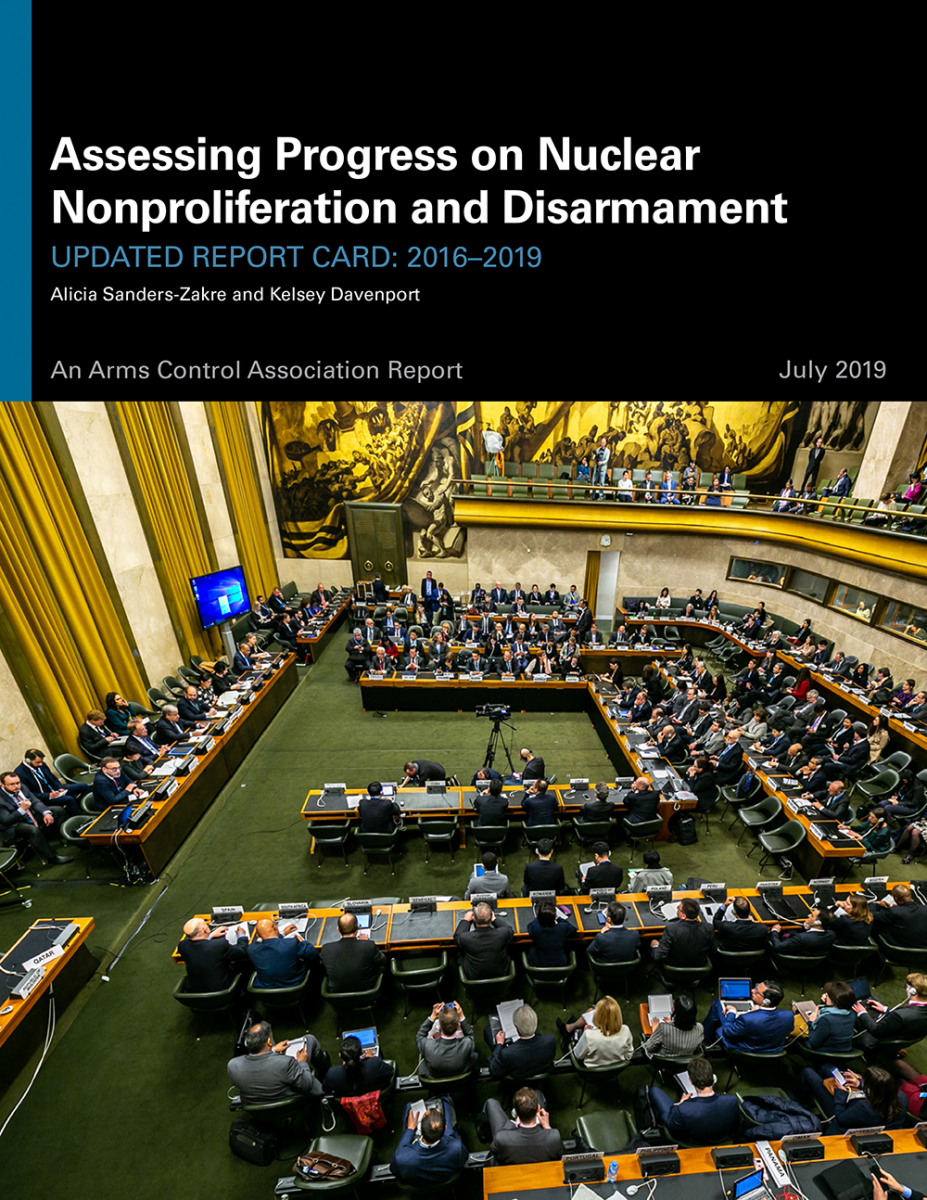 The report’s findings suggest that risk of nuclear use is increasing and document why and how critical nonproliferation and disarmament norms are eroding. Read the full report on our website.

The Arms Control Association family is deeply saddened by the death of a long-time board member and leading nuclear arms control expert, Janne E. Nolan. Janne passed June 26 in Washington due to complications of brain cancer. She was 67 years old. 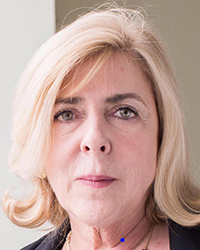 Janne leaves behind a powerful legacy in the nuclear arms control and international security field as an analyst, public servant, and educator. She joined the Arms Control Association board of directors in 1994, served as the chair of the Nuclear Security Working Group, and was a faculty member at the Elliot School of International Affairs at the George Washington University.

Throughout her long-career career, she held several senior positions in the government and private sector, including as foreign policy director at the Century Foundation of New York, senior fellow in the Foreign Policy Studies Program at the Brookings Institution, professor of International Affairs and deputy director of the Ridgway Center at the University of Pittsburgh, and director and research professor at Georgetown University.

Janne’s public service included positions such as a foreign affairs officer in the Department of State, senior representative to the Senate Armed Services Committee for Senator Gary Hart (D-Colo.), and as an appointed member of the National Defense Panel, the Secretary of Defense’s Policy Board and the State Department's Accountability Review Board investigating terrorist attacks against U.S. embassies in East Africa.

She authored nine books, including Tyranny of Consensus: Discourse and Dissent in American National Security Policy. She also published numerous articles in publications such as Foreign Affairs, Foreign Policy, Scientific American, The New York Times, The New Republic, the National Interest and The Washington Post.

The board and staff of the Arms Control Association mourn Janne’s death and we’re grateful for her many contributions to the field, her wise counsel as a board member, and her inspiration and mentorship as an educator. Look for more on Janne’s life and legacy in the September issue of Arms Control Today.