Authored by Kelsey Davenport and Alicia Sanders-Zakre on January 24, 2019

The United States and Poland are co-hosting a summit on Middle East stability with a particular focus on countering Iran, although several European foreign ministers are planning to skip the event. The ministerial-level meeting is scheduled for Feb. 13-14 in Warsaw.

U.S. Secretary of State Mike Pompeo told Fox News Jan. 11 that the summit will “focus on Middle East stability and peace, freedom and security here in this region, and that includes an important element of making sure that Iran is not a destabilizing influence."

The Polish Ministry of Foreign Affairs, however, did not single out Iran in its press release announcing the summit, which said that the ministerial meeting will address a “range of critical issues” in the Middle East. Reportedly, more than 70 countries are invited, although the Wall Street Journal reported Jan. 17 that several European foreign ministers and EU foreign policy chief Federica Mogherini will not attend the summit.

Iranian news outlet IRNA reported Jan. 13 that Iran’s Foreign Ministry had summoned a senior Polish diplomat to voice the government’s concerns about Warsaw’s hosting of the conference, claiming that Iran saw the summit as a “hostile act against Iran” and threatening retaliatory action.

It is unclear what the United States hopes to achieve at the summit. If the Trump administration expects to shore up support for its Iran sanctions campaign, it will likely face resistance, as the U.S. strategy to pressure Iran into accepting a new deal that covers more than the country’s nuclear program has been consistently criticized by key allies. The EU, France, Germany, and the United Kingdom all pressed the Trump administration to remain in the multilateral nuclear deal known as the Joint Comprehensive Plan of Action (JCPOA), and are working to preserve legitimate trade with Iran, despite U.S. sanctions.

The Jan. 17 Wall Street Journal article also reported that one of Europe’s efforts, the so-called Special Purpose Vehicle (SPV), a barter-like system designed to facilitate payments for trade, will be registered in France in the next several weeks, with France, Germany, and the UK as shareholders. The SPV is likely to focus on humanitarian trade exempt from U.S. sanctions, so it is unclear how much Iran will benefit from the arrangement once it is up and running.—KELSEY DAVENPORT, director for nonproliferation policy, and ALICIA SANDERS-ZAKRE, research assistant

Iran attempted to launch a satellite Jan. 15, but the rocket failed before the satellite could enter into orbit. Iran is not prohibited from launching satellites, but several countries, including the United States and France, condemned the launch because the rocket used technology applicable to ballistic missiles.

Mohammad Javad Azari Jahromi, Iran’s minister of communication and information technology, said Jan. 15 that the first two stages of the rocket were successful but the third stage did not reach the necessary speed to launch the Payam satellite into orbit approximately 500 kilometers above the earth. The Payam would have been used for high-resolution survey images. He said Iran plans to launch another satellite in the near future.

Iran used its Simorgh satellite launch vehicle, a three-stage rocket, for the launch. Iran has successfully launched satellites in orbit before using its less-powerful two-stage Safir launch vehicle. Its prior attempt using the Simorgh in July 2017 was unsuccessful.

Iran’s satellite launches do not violate the nuclear deal or UN Security Council Resolution 2231, which endorsed the agreement and calls upon Iran to refrain from activities related to ballistic missiles designed to be capable of delivering a nuclear weapon. This language is nonbinding and does not reference satellite launches.

However, U.S. Secretary of State Mike Pompeo still characterized the launch as “continued defiance of the international community and UN Security Council Resolution 2231." In a statement warning Iran not to conduct the launch, Pompeo said Jan. 3 that the resolution’s language includes space launch vehicles because they “incorporate technologies that are virtually identical to that used in ballistic missiles, including in intercontinental ballistic missiles” (ICBM).

While a satellite launch will provide Iran with data relevant to missile development, there are significant technical differences between a space launch vehicle and an ICBM. As missile expert Michael Elleman noted in an analysis of the Simorgh launch, ICBMs, unlike satellite launch vehicles, must protect a warhead during re-entry into the atmosphere and require higher-thrust in the upper stages to reach altitudes necessary for the longer range.

Elleman, a senior fellow at the International Institute for Strategic Studies, concludes that the Simorgh was “designed and optimised for use as an SLV, not as a ballistic missile, let alone one for delivering nuclear weapons. It could certainly be transformed to perform as a ballistic missile, but this would require a new design and configuration, and then it would have to be subjected to a flight-trial programme to validate its military utility.” 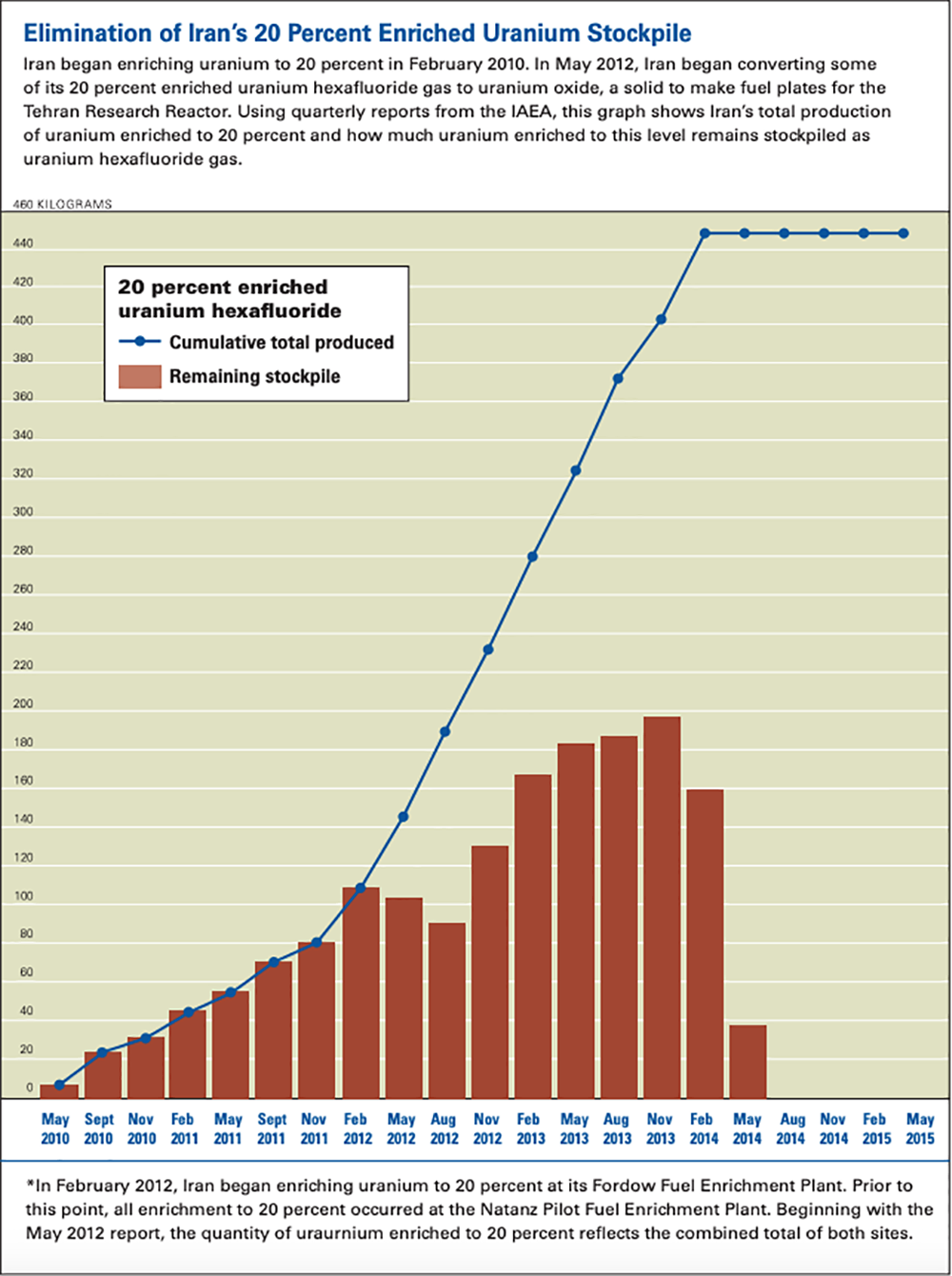 Ali Akbar Salehi, head of the Atomic Energy Organization of Iran, said Jan. 13 that Iran has started to design its own reactor fuel using uranium enriched to 20 percent uranium-235. Salehi described Iran’s design as an “upgrade” that will increase the efficiency of the Tehran Research Reactor (TRR), which produces medical isotopes. Salehi said Iran will no longer need to rely on reverse engineering to produce fuel.

Fuel design work is not a violation of the JCPOA—Annex III of the accord even states that the P5+1 will seek to cooperate with Iran on the supply of fuels, including fabrication and design when appropriate—but there are limitations on what Iran can do.

The JCPOA requires Iran to seek a commercial contract for the purchase of fuel and enriched uranium targets for the TRR. If Iran cannot conclude such a contract it can, under IAEA monitoring, bring limited amounts (five kilograms) of 20 percent enriched uranium into the country for fuel fabrication. Iran can only bring in another five kilograms after the IAEA verifies that the prior amount has been fabricated or mixed with aluminum for fabrication. (See JCPOA, Annex I, Section I, Paragraph 60 for more details.)

Two days after the fuel design remarks, Salehi said that Iran could resume enriching uranium to 20 percent uranium-235 within three to four days, but “currently we do not need 20 percent enrichment.”

Before negotiations on the JCPOA, Iran had produced uranium enriched to 20 percent, which is far below the 90 percent uranium-235 necessary for nuclear weapons but still poses more of a proliferation risk than the current limit of 3.67 percent. Iran halted 20 percent enrichment in 2013 under the interim deal with the P5+1 and as part of the JCPOA, blended down or shipped out its remaining stocks of 20 percent enriched uranium.

On Jan. 17, the Trump administration unveiled its Missile Defense Review, which outlines the administration’s strategy to counter missile threats, focusing on those posed by “rogue states” defined as Iran and North Korea.

The review cites Iranian missile development as a primary challenge, repeatedly referencing the possibility of the development of an Iranian ICBM and the U.S. missile defense response. The report also describes Iran’s transfer of missiles to terrorist organizations which then target U.S. and allied forces in the Middle East as a missile threat, noting that “one of Iran’s primary tools of coercion and force projection is its missile arsenal, which is characterized by increasing numbers, as well as increases in accuracy, range, and lethality.”

The report states that Iran’s “desire to have a strategic counter to the United States” could cause it to deploy an intercontinental ballistic missile and that investments in its space program could expedite this development. It also reiterated Trump administration claims that Iranian space development will allow it to more easily develop an ICBM. “Iran, through its Space Launch Vehicle (SLV) program, has established the technical foundation to shorten the timeline to acquire an ICBM capability … as space launch vehicles use inherently similar technology.”

On Jan. 15, Iran attempted to launch a satellite, but the launch failed (see above). Technical experts have challenged the administration’s claims that the technology required for space launch vehicles exactly mirror that for ICBMs, although there is some technological overlap.

To counter the purported threat of an Iranian ICBM, the review advocates building an additional Ground-Based Interceptor (GBI) site in the United States, to supplement the two existing sites, expressly for the purpose of adding capacity to defend against a possible future Iranian ICBM. While the review calls for a third site to be built, a decision to build the site has not yet been made.

While Iran’s conventionally-armed ballistic missiles pose a regional threat, the argument that the United States must build a third GBI site to counter a future threat from nuclear-armed Iranian ICBMs is dubious at best. Iran has committed to voluntarily cap the range of its ballistic missiles to 2,000 kilometers (an ICBM has a range in excess of 5,500 kilometers) and there is no indication that Iran is testing systems that exceed the 2,000-kilometer range. And so long as the JCPOA remains in place, Iran’s nuclear program will be subject to restrictions and more intrusive inspections that block its ability to build a nuclear weapon and thus prevent the country from arming its ballistic missiles with nuclear warheads.

The review also claims, without providing any evidence, that U.S. missile defenses serve to deter Iran from pursuing nuclear weapons and ICBMs since the United States withdrew from the Iran nuclear deal.

“U.S. missile defense capabilities provide an important hedge against evolving rogue state missile threats to the United States, allies, and partners, such as Iran seeking to acquire nuclear weapons and ICBM capabilities absent continued U.S. participation in the Joint Comprehensive Plan of Action,” according to the Missile Defense Review.

In a Dec. 4 Senate Armed Services Committee hearing, Senator Elizabeth Warren (D-Mass.) expressed her support for the United States to re-enter the JCPOA.

"If Iran maintains itself in compliance, then I believe the President should reverse his reckless decision to withdraw from the nuclear deal and reimpose sanctions because the deal makes America safer and the world safer," Warren stated.

The statement indicates that Warren, who announced her intention Dec. 31 to create a presidential exploratory committee for the 2020 presidential election, would re-enter the JCPOA in 2021 if elected.

More than 40 organizations, including J Street, MoveOn, Indivisible, Foreign Policy for America, Friends Committee on National Legislation and Win Without War, signed on to a statement of principles to Congress on U.S. policy toward Iran, which included supporting the United States returning to compliance with the JCPOA. The Arms Control Association, which produces this newsletter, also signed on to the statement.

The statement of principles also calls on members of Congress to oppose sanctions that disrupt other parties’ implementation of the deal, that prevent the United States from returning to the deal in the future, that disproportionately impact civilians, or that block humanitarian aid to Iran. The organizations also request that members of Congress support “good faith diplomacy” as needed to address other concerning Iranian behavior and oppose starting a “war of choice” with Iran.