"I actually have a pretty good collection of Arms Control Today, which I have read throughout my career. It's one of the few really serious publications on arms control issues."
– Gary Samore
Former White House Coordinator for Arms Control and WMD Terrorism
Majority of Americans Still Support the CTBT

A new survey shows that 20 years after the opening for signature of the CTBT, the majority of Americans still support the test ban. This latest survey joins many other polls that have found high American support for the CTBT over the past six decades. 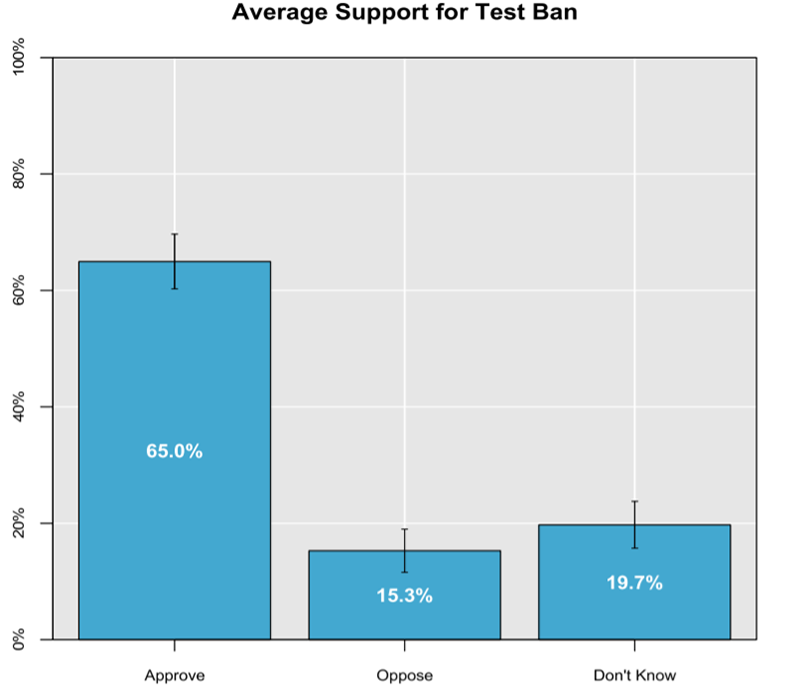 This chart, pulled from data from the 2016 poll by Herzog and Baron, was in response to the following question: “Should the US Senate approve a treaty with 164 other countries that would prohibit nuclear weapon test explosions worldwide?”

Working with the polling firm YouGov, Stephen Herzog and Jonathan Baron, both Ph.D candidates at Yale University, conducted the study from Sept. 28 to Nov. 7, 2016 and published their findings in The Nonproliferation Review.

They found that the majority of Democrats, Republicans and Independents that responded to the survey all support the treaty, although a larger majority of Democrats (70%) than Republicans (56%) are in favor of the accord. 45-54 year-old survey respondents were the most likely age group to express support and respondents in the western region of the United States had the highest regional level of support. 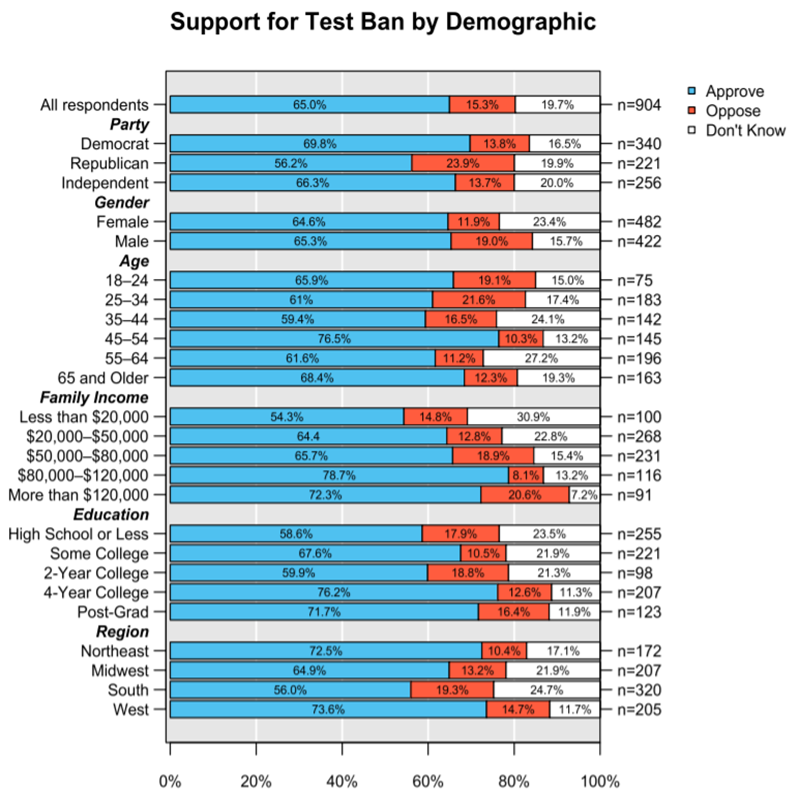 Herzog and Baron further questioned those who support a nuclear testing ban, and found that, of the various justifications included in the polling questions, survey respondents who support the treaty do so primarily because of national security concerns.

The survey suggests that respondents who expressed opposition to the treaty were most worried about whether the treaty is enforceable, write Herzog and Baron. Those surveyed who opposed the treaty were least concerned about the ban of nuclear testing leading to global nuclear disarmament.

Roughly one-fifth of Americans who responded to the poll remain undecided about the CTBT and many respondents have requested further information about its objectives, verification and the arguments for and against it.

While Herzog and Baron’s survey is the most recent to record U.S. public opinion on the CTBT and nuclear testing, several other polls have been conducted in the past, finding high support in for the treaty.

In July 1998, a poll commissioned by the Coalition to Reduce Nuclear Dangers in six states found that approximately eight out of ten voters who responded to the survey said the treaty should be approved. The survey specifically asked respondents: “Do you think the U.S. Senate should approve a Treaty with 140 other countries that would prohibit underground nuclear weapons explosions worldwide?”

Support for the CTBT in the 1998 study cut across party lines, with similarly high levels of support in Democratic, Republican and Independent parties.

In 1999, the Coalition to Reduce Nuclear Dangers released a backgrounder with polling data from the Roper Center for Opinion Research showing that public approval for a nuclear test ban had been strong for four decades.

Other polls have also found high American support for the Comprehensive Test Ban Treaty in the past, including the following:

Shervin Taheran and Ryan Fedasiuk contributed to this report.

BRIEFING: "Trump’s Effort to Sabotage New START and the Risk of an All-Out Arms Race"

Creating an Opportunity to Withdraw U.S. Nuclear Weapons From Europe