“It will take all of us working together – government officials, and diplomats, academic experts, and scientists, activists, and organizers – to come up with new and innovative approaches to strengthen transparency and predictability, reduce risk, and forge the next generation of arms control agreements.”
– Wendy Sherman
U.S. Deputy Secretary of State
June 2, 2022
Trump Repeats Failing Formula on North Korean Threat

In his high profile address to the South Korean National Assembly Nov. 8, President Donald Trump missed a crucial opportunity to clarify and adjust his administration’s disjointed and, at times, reckless policy toward North Korea. 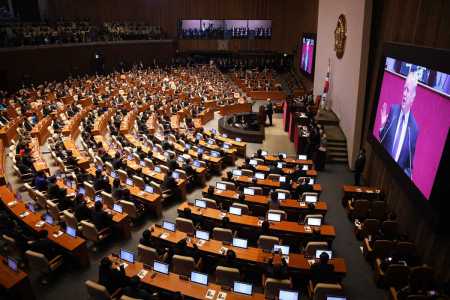 Although Trump indicated earlier today in a press conference in Seoul that he is "open" to talks with North Korea, he has also said in recent days that now is not the time for such talks but instead it is time to apply “more pressure” on North Korea to bring North Korea to bargaining table and to agree to eliminate its nuclear program. While in Asia, Trump has also repeated, albeit in less bombastic terms than before, that he will resort to the use of military force if North Korea does not back down.

In his speech to the South Korean National Assembly, the President made clear that in order to begin authentic talks with North Korea, Pyongyang's leaders must "cease their threats" and take sincere steps towards denuclearization, including halting ballistic missile tests.*

While pressure is part of an effective strategy toward restraining North Korea, sanctions and pressure alone have not and will not lead North Korea to reverse course. Worse still, Trump’s threats of “fire and fury” only reinforce North Korea’s deterimination to retain and improve its nuclear and missile capabilities.

The history of the nuclear age has shown that smaller states, even those without nuclear weapons, are not easily intimidated by U.S. nuclear threats. North Korea is no exception.

For their part, North Korean officials have privately and publicly signaled that they will only be willing to discuss denuclearization if the United States drops its “hostile policy” toward North Korea. With additional nuclear tests and long-range ballistic missile tests, North Korea could soon field a nuclear-armed ICBM that its leaders say is necessary to deter U.S. aggression.

The two sides are caught in a dangerous action-reaction cycle that makes a peaceful solution more difficult and a catastrophic war more likely. Both sides need to look for and pursue a diplomatic off-ramp.

Though Washington and Pyongyang maintain a line of communication through the “New York channel,” there is no sign yet of any structured talks designed to resolve the crisis. Trump’s remarks in Seoul will further complicate the path to a diplomatic outcome. If Donald Trump and Kim Jong-Un can both can refrain from further threats, it may still be possible to initiate a serious, sustained direct U.S.-North Korean dialogue.

But this will require talks-about-talks, without preconditions, that are designed to create a framework for a negotiated or brokered agreement that addresses the concerns of the international community and the security concerns of North Korea.

A common sense first step to build confidence would be reaching agreement on an immediate halt to further North Korean nuclear and intermediate- or long-range ballistic missile tests and U.S. military exercises and maneuvers that could be interpreted to be practice runs for an attack.

Given the enormous risks of any military conflict in Korea, Congress is becoming more vocal about the urgent need for a more serious diplomatic approach.

Bipartisan legislation was introduced last month in the House by Korean War veteran John Conyers (D-Mich.) and more than 60 House Democrats and Republicans, along with parallel efforts in the Senate led by Sen. Ed Markey and Sen. Chris Murphy, that would bar funding for a preemptive U.S. attack against North Korea.

Such a course of action does not guarantee success, but it offers the best chance for curbing the North Korean nuclear threat and avoiding a catastrophic war on the Korean peninsula.

*UPDATED: This post has been updated to reflect a clarification from a senior administration official on Air Force One on Nov. 8 about President Trump's remarks at the South Korean National Assembly.