U.S. President Donald Trump is boxing himself in on options for responding to the North Korean nuclear crisis, appearing to rule out deterrence as an approach for dealing with Pyongyang and undercutting calls for negotiations by his own top diplomat. 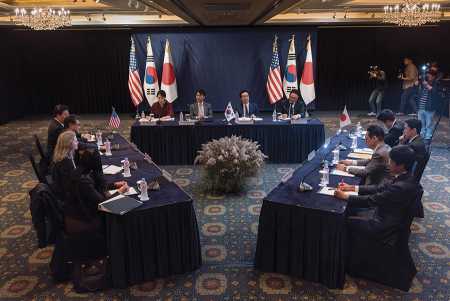 Continued confusion regarding U.S. policy toward North Korea comes ahead of Trump’s visit the region Nov. 3-13, which includes stops in South Korea, Japan, and China, and as North Korea downplays the chances for diplomacy with the United States after Trump insulted leader Kim Jong Un at the UN General Assembly in September. (See ACT, October 2017.)

Choe Son-hui, director-general of the North America Department of the North Korean Foreign Ministry, said at a conference in Moscow on Oct. 20 that North Korea is “not planning to hold talks on nuclear weapons” at this time. Choe’s statement reiterated recent messages from Pyongyang that North Korea will not negotiate while the United States engages in a hostile policy.

U.S. national security adviser H.R. McMaster, speaking Oct. 19 at an event hosted by the Foundation for Defense of Democracies, said that Trump will not accept North Korea “threatening the United States with a nuclear weapon” and that an approach of “accept and deter is unacceptable.” The United States is in a “race to resolve this short of military action,” he said.

McMaster’s comments were echoed by CIA director Mike Pompeo. Speaking at the same event, Pompeo said that the United States is “running out of time” to stop North Korea from developing the ability to strike the United States with a nuclear-armed ballistic missile. Trump has been very clear that he will not allow North Korea to “hold America at risk” and will use military force if necessary to prevent it, he said. 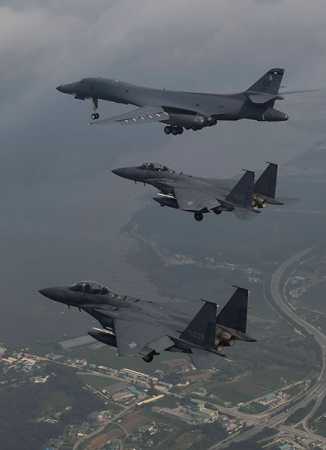 Trump has made comments in the past alluding to the use of military force or a preventative strike against North Korea’s missile capabilities. Sen. Chris Murphy (D-Conn.) said in an Oct. 11 interview with VOX that the president “has sent us very clear signals about his enthusiasm for military conflict with North Korea.”

“Given the stakes of a potential strike against North Korea, we have to act under the assumption that he’s serious,” Murphy said.

Although prior U.S. presidents have not ruled out such use of military force, Trump’s rhetoric and actions far exceed past threats.

For instance, the United States in September flew B1-B bombers farther north of the demilitarized zone separating North and South Korea than “any U.S. fighter or bomber aircraft have flown off North Korea’s coast in the 21st century,” according to a Sept. 23 press release from Pentagon spokesperson Dana White. The mission was a “demonstration of U.S. resolve and a clear message that the president has many military options to defeat any threat,” according to the statement.

Concern about a possible preventative or pre-emptive military strike against North Korea without an authorization for the use of military force from Congress has prompted a bipartisan group of 60 members in the House of Representatives to support a bill calling for a prohibition on “unconstitutional” strikes against North Korea.

The bill, led by Rep. John Conyers Jr. (D-Mich.), says that the president must seek an authorization from Congress before conducting a strike. In an Oct. 19 letter to colleagues about the bill, Conyers and several other members wrote that the legislation is meant to “ensure that President Trump cannot launch an unconstitutional strike that experts say would lead to catastrophic war on the Korean Peninsula.”

The legislation also includes a sense of Congress that “conflict on the Korean peninsula would have catastrophic consequences” and that “the president, in coordination with U.S. allies, should explore and pursue every feasible opportunity to engage in talks with North Korea on concrete steps to reduce tensions and improve communication, and to initiate negotiations designed to achieve a diplomatic agreement to halt and eventually reverse North Korea’s nuclear and missile pursuits and to move toward denuclearization.”

Although several different versions of a so-called freeze-for-freeze proposal have been put forward, Russia and China support a version that calls for North Korea halting nuclear and missiles tests in return for the United States and South Korea rolling back joint military exercises.

McMaster has dismissed the idea of an interim deal intended to freeze North Korea’s nuclear and missile activities. McMaster also said in September that he would not comment on the specific preconditions for talks with North Korea, but gave some examples of confidence-building measures that Pyongyang could take, including allowing inspectors into its nuclear facilities before talks on denuclearization can begin.

More recently, U.S. Deputy Secretary of State John Sullivan said that the U.S. objective remains a “denuclearized Korean peninsula.” Speaking to reporters Oct. 18 following a trilateral meeting in Seoul with his South Korean and Japanese counterparts, he said that the Trump administration is “dedicated” to diplomacy and will continue to use a “campaign of pressure to bring North Korea to the negotiating table without preconditions.”

Sullivan’s remarks coincide with previous statements on diplomacy without preconditions made by Secretary of State Rex Tillerson, but McMaster’s rhetoric appears to reject talks without conditions, and Trump himself tweeted on Oct. 1 that Tillerson was “wasting his time trying to negotiate” with North Korea.

Much of the Trump administration’s pressure campaign has focused on ratcheting up sanctions, including an executive order in September that targets companies and banks doing business with North Korea, but former officials are doubtful that sanctions alone will be enough to get North Korea back to the negotiating table.

Former CIA director James Woolsey told Voice of America in a September interview that sanctions “probably won’t get the job done” but that the United States should do what it can on sanctions, including working with China to “bring them along” on tougher sanctions.—KELSEY DAVENPORT