– George Stephanopolous
Host of ABC's This Week
January 1, 2005
Listen to our European Partners: Sustain the Nuclear Deal with Iran

Authored by Kelsey Davenport on September 27, 2017

Before taking action to undermine or violate the nuclear deal with Iran, President Donald Trump and the U.S. Congress would be wise to heed the words of Washington’s European partners in the deal, namely that the agreement is working and renegotiation is futile. 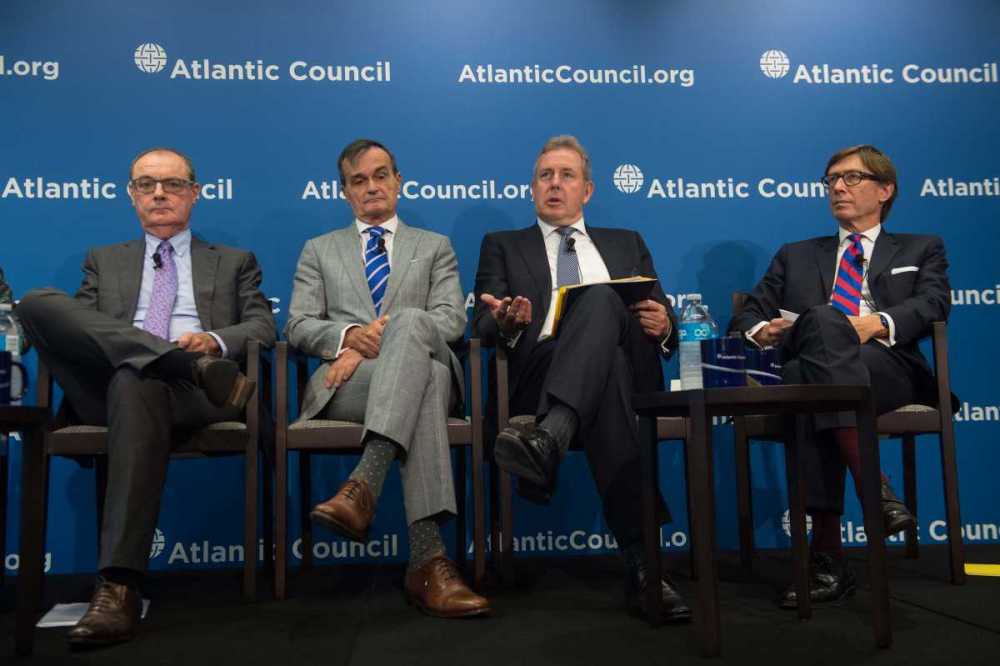 Ambassador David O’Sullivan of the European Union, Ambassador Peter Wittig of Germany, Ambassador Gerard Araud of France, and Ambassador Kim Darroch of the United Kingdom, joined forces to deliver these messages at the Atlantic Council Sept. 25, just three weeks ahead of the Oct. 15 deadline for Trump to issue or withhold a certification to Congress tied to Iran’s compliance under the deal.

While U.S. officials have acknowledged that Iran is in compliance with the accord, the certification is broader than Iran’s adherence to its deal commitments. Trump’s own comments point toward withholding certification as required every 90 days under the Iran Nuclear Agreement Review Act (INARA). If Trump fails to issue the certification by Oct. 15, INARA allows Congress to reimpose nuclear-related sanctions waived under the deal on an expedited basis.

But in addition to violating the deal, reimposing sanctions while Iran is meeting its commitments risks isolating the United States and undermining future U.S. diplomatic efforts– points that the European ambassadors alluded to at the event.

O’Sullivan reminded Washington that the EU can issue regulations blocking U.S. secondary sanctions, which the body has done in past. While O’Sullivan added that the decision to take this step would depend on the context, he said that the EU will “act to protect legitimate interests” of EU companies.

If the EU uses its blocking statute, the efficacy of re-imposed sanctions will be hampered and the United States, not Iran, would be isolated for having violated the deal–risks Congress should seriously consider before making a move to reimpose sanctions.

Just as critically, Wittig emphasized the long-term nonproliferation consequences of walking away from the deal. He noted that in addition to the risk of Iran resuming nuclear activities restricted by the accord, walking away from the sends a signal to North Korea that diplomatic agreements cannot be trusted. Wittig said we should “never lose sight of this” when considering actions on Iran.

While the ambassadors firmly agreed that the door is closed on renegotiation of the deal, they were open to negotiations on other issues, such as ballistic missiles and regional activities.

Araud noted that there will “not be any reopening of the agreement” but said that “nothing in the agreement is preventing us from facing” the challenges Iran poses in other areas and that France is ready to work with allies to confront those challenges.

Darroch said the UK supports this approach as well, arguing to keep the deal in place and “intensify the discussions” on Iran’s other activities.

Darroch and Araud make an important point here–if Washington walks away from the agreement, the United States loses credibility in any future negotiation with Iran, nuclear or otherwise. Washington is also likely to lose credibility with important partners that support U.S. goals of confronting Iran’s malign activities‑support that the United States will need to push back against Tehran.

If Trump is truly concerned Iran’s destabilizing activities in region, sustaining the deal creates space and support to address these issues, as well as a platform for building on the nonproliferation value of the accord in years to come, but as O’Sullivan noted, there are “no regional issues that we have with Iran that would not be even more difficult to handle if Iran possessed nuclear weapons.”