EU foreign policy chief Federica Mogherini stated unequivocally after a ministerial meeting between the P5+1 (China, France Germany, Russia, the United Kingdom and the United States) and Iran that all parties agreed that the nuclear deal is being fully implemented and there are no violations. 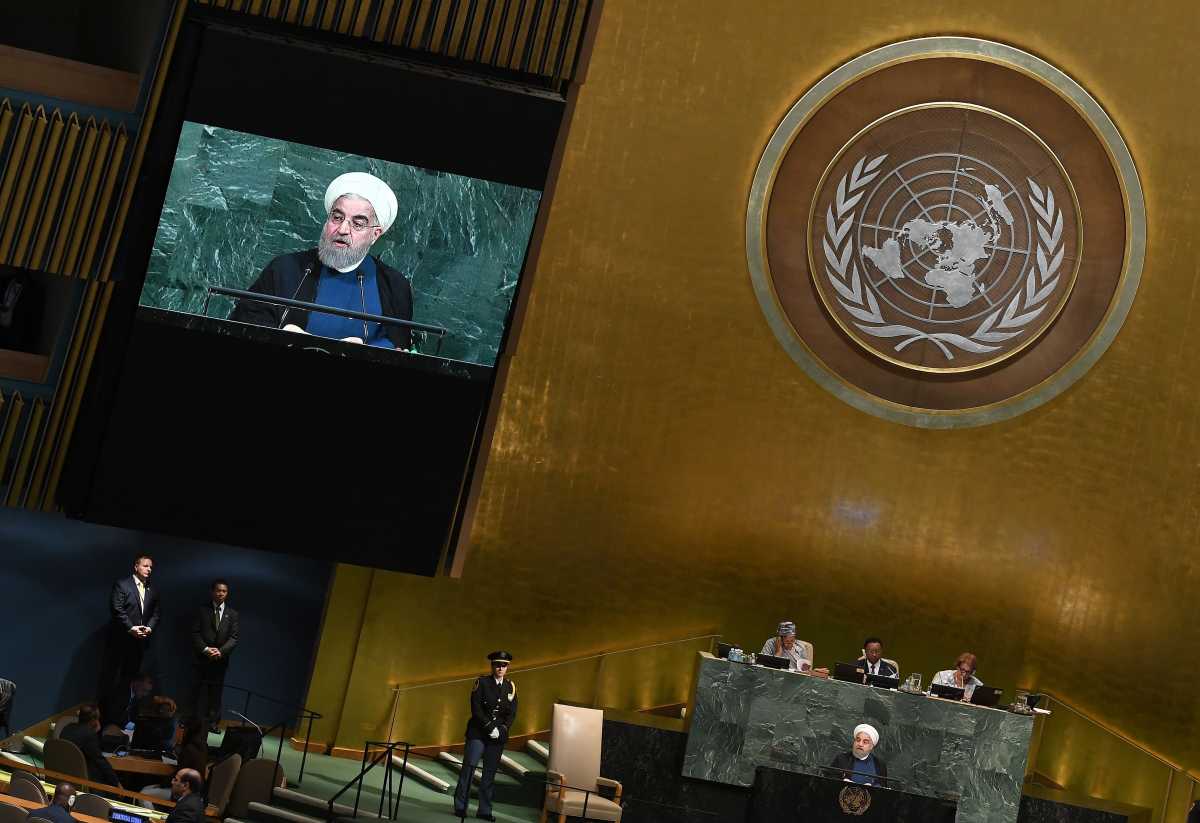 U.S. Secretary of State Rex Tillerson participated in the ministerial meeting and told press after it concluded that Iran is in “technical compliance with the agreement,” but that Trump still has concerns about enforcement of the deal and the thoroughness of the agreement.

The Sept. 20 ministerial meeting took place on the sidelines of the opening of the UN General Assembly meeting, where U.S. President Donald Trump called the nuclear deal with Iran one of the “worst and most one-sided transactions” and an “embarrassment to the United States” in his Sept. 19 speech.

Trump did not mention if he will issue a certification to Congress tied to the nuclear deal Oct. 15, but said Washington cannot abide by an agreement if it “provides cover for the eventual construction of a nuclear program.”

Trump later told reporters on Sept. 20 that he had made a decision on certification, but did not say what his decision is. While withholding certification does not violate the JCPOA, it opens the door for Congress to reimpose sanctions waived under the agreement on an expedited schedule. Past remarks indicate Trump wants to withhold the certification, despite international support for the deal and Iran’s compliance with the accord, which U.S. officials have also affirmed.

The day after Trump’s UN speech, General John Hyten, head of U.S. Strategic Command, said that Iran is operating under the restrictions of the JCPOA and when the United States signs an agreement “its our jobs to live up to the terms of the agreement and our jobs to enforce that.”

Hyten, speaking Sept. 20 at the Hudson Institute, did raise concerns about Iran’s ballistic missile activity, which is not covered by the deal, but limited by the UN Security Council Resolution endorsing the agreement.

Later that day, in an interview with CNN’s Christiane Amanpour, Macron said it would be a “big mistake” for Trump to stop the deal. He said he would try and convince Trump to work cooperatively to build on the nuclear deal to address issues like ballistic missiles.

British Prime Minister Theresa May also brought up the nuclear deal in a Sept. 20 bilateral meeting with Trump and reiterated the UK’s “strong commitment to the deal” and its vital importance to regional security.

International support for the deal played heavily in Iranian President Hassan Rouhani’s address to the UN Sept. 20. Rouhani said that, given the multilateral nature of the deal and the Security Council’s endorsement of the agreement, “it belongs to the international community.” Rouhani said that the deal can be a “new model for global interactions, based on mutual constructive engagement.”

Rouhani said that Iran “will not be the first country to violate the agreement but it will respond decisively and resolutely to its violation by any party.” He said it would be a “great pity” if the deal were “destroyed by rouge newcomers to the world of politics.”

Israeli Prime Minister Benjamin Netanyahu, unsurprisingly, followed Trump’s critical line and described Israel’s policy on the nuclear deal as “fix it or nix it.” He said Sept. 10 that fixing the deal means inspecting military sites and “getting rid of the sunset clause.”

The so-called sunset provisions were also raised by U.S. Secretary of State Rex Tillerson as “kicking the can down the road.” Tillerson said Sept. 20 if Washington is going to stick with the Iran deal, there has to be changes to those areas.

Tillerson and Netanyahu are right; some restrictions do expire within 10-25 years, but other restrictions that act as barriers to nuclear weapons are permanent. And any attempt to extend restrictions requires stabilizing and sustaining the current deal, not scrapping it and trying to renegotiate a new agreement.—KELSEY DAVENPORT, director for nonproliferation policy

Back in Washington, seven Senate Democrats wrote to senior Trump administration officials Sept. 20 to request written reports and public testimony if they are aware of any information that “would suggest that Iran is no longer complying with the JCPOA” or that Trump might conclude that “continued suspension of sanctions is no longer in the vital national security interest of the United States.”

These are areas covered in the compliance certification that the president is required to issue to Congress every 90 days as part of the Iran Nuclear Agreement Review Act of 2015 (INARA). The senators set a deadline of Oct. 6 to receive the information.

This is a positive step, given that the next compliance certification required by INARA is due Oct. 15. If Trump withholds certification, there is no threshold in INARA for the provision of information to Congress about the reasons for withholding compliance, which is troubling given that Congress can reimpose sanctions waived the nuclear deal if the certification is not granted.

Given that the Trump administration renewed sanctions waivers on Sept. 14 using national security provisions, as required for the United States to remain in compliance with the nuclear agreement, withholding certification would represent an unaccountable shift in the U.S. position unless Iran were violating the deal, which seems extremely unlikely given that international and U.S. assessments point toward Iran meeting its commitments.

The International Atomic Energy Agency (IAEA) Board of Governors met Sept. 11-16 and considered the agency’s most recent quarterly report on Iran’s nuclear program, which points to Iran meeting the restrictions laid out in the JCPOA. IAEA Director-General Yukiya Amano, who was reappointed to a third term this week, said in remarks to the Board Sept. 11 that Iran is implementing its commitments.

The Aug. 31 report noted that:

The report also said that Iran restarted its heavy-water production plant. Iran informed the IAEA it would restart production of heavy-water June 17, after a month-long shutdown. Iran also shipped out 19 metric tons of heavy-water, which the IAEA verified reached a destination outside of Iran. Iran twice exceeded the heavy-water limit set by the deal in 2016, and its storage of heavy-water outside the country remains controversial.

The IAEA report also noted that inspectors have conducted complementary access visits to “sites and other locations” in Iran, as permitted by Iran’s additional protocol.

The report said the IAEA was monitoring other nuclear-related commitments set out in sections D, E, S, and T of the deal, but did not provide any information about those activities.

Section T includes prohibitions on activities related to developing a nuclear explosive device, Section S covers uranium isotope separation, Section D deals with shipping out spent fuel from reactors, and Section E deals with spent fuel reprocessing activities, including the operation of hot cells for activities such as medical isotope separation. This is the first time Sections D, E, and S, were mentioned in an IAEA quarterly report on the JCPOA.

The Iran deal also was referenced in several statements at the IAEA General Conference, Sept. 18-22, following the Board of Governors meeting.

U.S. Secretary of Energy Rick Perry represented the United States at the General Conference and said in his Sept. 18 statement that “it is imperative that the IAEA exercise its full authority” in monitoring Iran’s nuclear program to verify Tehran’s adherence to its commitments. He said Washington is committed to providing the IAEA with resources to support that mission.

Iran called attention to U.S. Ambassador to the UN Nikki Haley’s visit to the IAEA in August, and her “unjustifiable peculiar demands” on verification that go “far beyond the purview of the JCPOA.” He said that “politically-motivated and self-serving excuses” to weaken or nullify provisions of the nuclear deal will “undermine and jeopardize” the agreement.

European Leaders Statement in Support of the Deal

More than 80 nonproliferation experts signed onto a statement endorsing the nuclear deal, noting that the “agreement has proven to be an effective and verifiable arrangement that is a net plus for international nuclear nonproliferation efforts.”

The statement called for vigorous enforcement of the agreement and all parties to meet their commitments under the agreement. It also urged the president and Congress to “fulfill Washington’s commitments” and “refrain from actions that undermine U.S. obligations in the agreement.”

The Wisconsin Project on Nuclear Arms Control released a report Sept. 14 detailing several recommendations for increasing public transparency on the Iran deal. The recommendations in the report, titled “The Iran Nuclear Deal: How to Increase Public Transparency,” were generated from a bipartisan roundtable discussion with former U.S. officials.

One of the recommendations in the report suggested that the IAEA provide more information about the methods used to implement the verification measures outlined in the deal and provide more detail in the quarterly reports. Another recommendation urged that the biannual reports on Iran’s compliance required by INARA be made public, in full or a summary version. The current reports are classified.

National grassroots organizations signed a letter urging members of Congress “to do everything in Congress’ power to prevent Donald Trump from dismantling the Iran nuclear deal and from escalating towards a disastrous war with Iran.” The letter, released Sept. 13, also reiterated the success of the deal and warned about the dangers of scrapping it, including a “senseless slide to war.”

Led by NIAC Action, the letter was signed by 15 other organizations, including J Street, CREDO, MoveOn.org, and Win Without War.