Authored by Kingston Reif on February 9, 2016

Consider the following facts. The United States is planning to rebuild all three legs of the nuclear triad and their associated warheads at a cost and on a schedule that many military leaders say is unsustainable. In addition, these plans would leave the United States with a larger deployed strategic nuclear arsenal than President Barack Obama has said is needed for U.S. security. 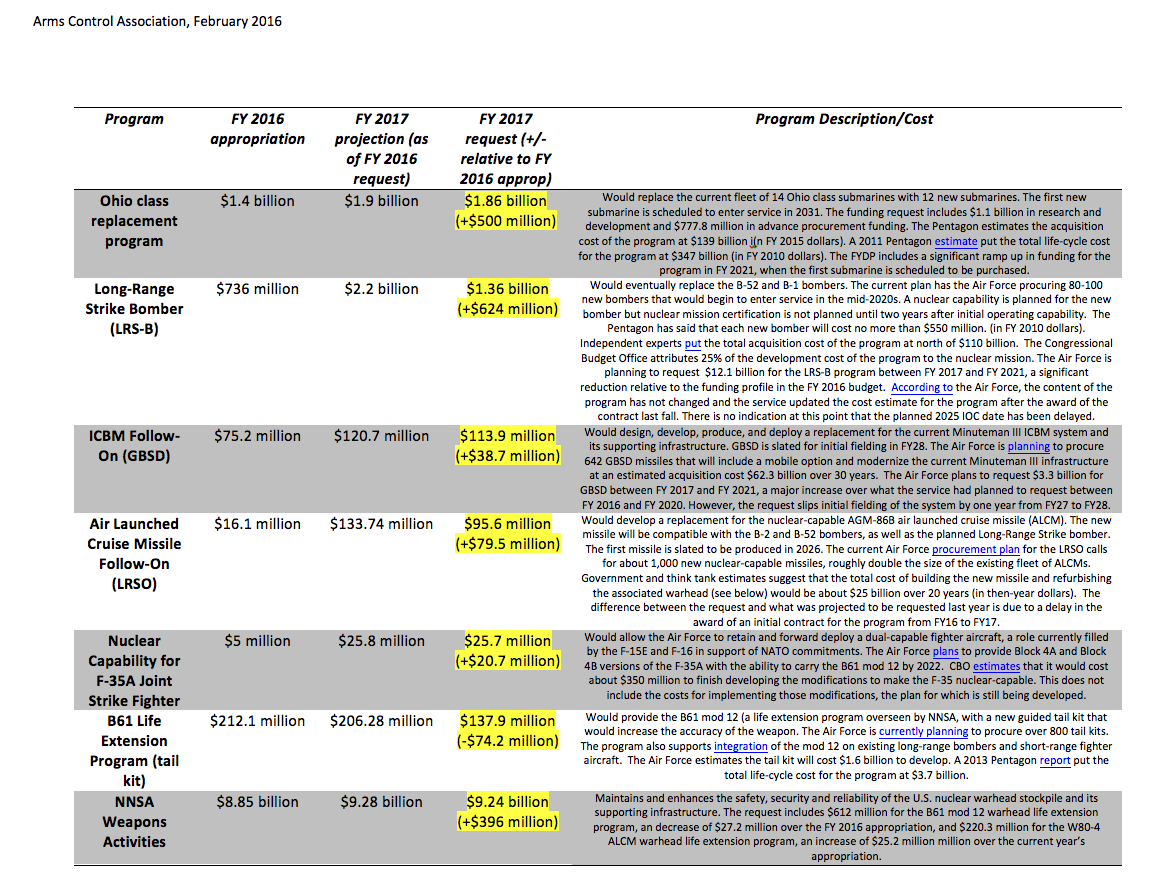 The president missed one of his last opportunities to make common sense adjustments to the current nuclear weapons spending trajectory.

According to a Congressional Budget Office report in January 2015, the direct costs of the administration's plans for nuclear forces will total about $350 billion between fiscal 2015 and fiscal 2024. Over the next 30 years, the bill could add up to $1 trillion, according to three separate independent estimates.

Though the president and his military advisers have determined that the deployed strategic nuclear arsenal can be reduced by up to one-third below the 2010 New Strategic Arms Reduction Treaty (New START) levels of 1,550 deployed strategic warheads and 700 deployed strategic delivery systems, the proposed spending is based on maintaining the New START levels in perpetuity.

Meanwhile, a growing number of military leaders are raising the alarm bells about the affordability of the modernization plans. As Todd Harrison, the director of defense budget analysis at the Center for Strategic and International Studies, convincingly demonstrates in a recent report, what makes the growing cost to sustain the nuclear mission especially daunting is that costs are scheduled to peak during the 2020s and overlap with a large bow wave in projected spending on conventional weapon system modernization programs.

While no one knows for sure what the military budget will look like after the expiration of the Budget Control Act, it seems unlikely that there will be enough money to fund all of the military's nuclear and conventional modernization proposals, especially during the decade of the 2020s when costs are expected to peak.

In short, the current nuclear spending plans are a fantasy. They can only be achieved in the event of substantial and prolonged increases to overall military spending over the next decade (an unlikely prospect), or if nuclear programs are funded at the expense conventional modernization or other national security programs (a reckless and self-defeating prospect). The most likely outcome is that the current plans will collapse under their own weight and force reductions in U.S. nuclear forces based on fiscal and political pressure rather than strategic decision, but not before hundreds of millions of taxpayer dollars are squandered.

Faced with the mammoth fiscal challenge, some senior Pentagon officials have are apparently satisfied to pass on the problem to their successors.

“We’re looking at that big [nuclear] bow wave and wondering how the heck we’re going to pay for it,” said Brian McKeon, the principal undersecretary of defense for policy, last October at an event in Washington. And we’re “probably thanking our stars we won’t be here to have to answer the question,” McKeon added with a chuckle according to those in attendance.

This kick-the-can-down-the-road approach is irresponsible. As Harrison notes, “making hard choices among weapon systems is the essence of peacetime defense strategy.”

Indeed, the opportunity costs of spending on nuclear weapons are already starkly evident in the semiautonomous National Nuclear Security Administration’s budget request, which funds the maintenance and modernization of U.S. nuclear warheads and their supporting infrastructure. While the request for nuclear weapons is roughly $400 million more than what Congress appropriated last year, the budget cuts funding for core nuclear terrorism prevention and nonproliferation programs well below last year’s funding level.

While it will largely be up to future administrations and Congress to adjust the current plans to comport with reduced nuclear requirements and the constrained fiscal environment, there is still time for the Obama administration to begin charting a more realistic path for the nuclear arsenal that doesn’t severely constrain the force sizing options of future presidents and reduces the risk of doing serious damage to conventional capabilities and other national security programs.

For example, the President could announce he has determined that U.S. deterrence requirements do not require current plans to spend at least $62 billion to buy a new fleet of some 642 land-based intercontinental ballistic missiles (ICBMs) to support a deployed force of 400 with a mobile option, and will instead base a follow-on program to support the deployment of a smaller force of 300 fixed, silo-based ICBMs.

The President could also announce that he has determined that U.S. nuclear deterrence requirements can be met with a smaller fleet of new strategic ballistic missile submarines.

In addition, as former Secretary of Defense Bill Perry has proposed, the president could halt plans for 1,000 to 1,100 new nuclear-capable air-launched cruise missiles (ALCM), which would cost some $20 billion to $30 billion.

Such changes would still leave a highly capable and credible nuclear triad.

We’ll find out soon enough if the president is willing to provide the necessary leadership to chart a saner approach.