Authored by Kelsey Davenport on October 15, 2015

Iran completed its formal review process of the July 14 nuclear deal yesterday, after parliament voted on a bill to approve the agreement known as the Joint Comprehensive Plan of Action (JCPOA) and the Guardian Council ratified the parliament’s bill.

Iran’s parliament, the Majlis, held two votes on the agreement. On Sunday, Oct. 11, they held a preliminary vote on the first reading of the bill, which passed 139-100. Iranian Foreign Minister Mohammad Javad Zarif and Ali Akbar Salehi, head of the Atomic Energy Organization of Iran, were present to answer questions from the parliament about the JCPOA.

Two days later, on Oct. 13, the Majlis voted in favor of the detailed bill approving the nuclear deal. The bill passed with 161 votes in favor, 59 votes against, and 13 abstentions. The Guardian Council approved the bill the following day, Oct. 14, paving the way for the formal adoption of the agreement.

In addition to endorsing the deal, the bill includes provisions requiring Iran to prioritize the use of released assets for strengthening the private sector and the national development fund. The bill also requires the Iranian government to monitor the compliance of the P5+1 (China, France, Germany, Russia, the United States and the United Kingdom) with the provisions of the agreement. It also says that the Supreme National Security Council must approve any International Atomic Energy Agency (IAEA) requests to visit military sites under the JCPOA. The IAEA can request access to military sites under the JCPOA if it has concerns that Iran is conducting illicit nuclear activities.

According to the timeline specified in the July 14 agreement, the text of the deal will be adopted on Oct. 19*—which is 90 days after the July 20 unanimous vote for UN Security Council resolution 2231, endorsing the deal.

At that time both Iran and the P5+1 will begin taking steps to meet commitments under the deal. Salehi says Iran can take the necessary steps within two months.

On Oct. 15, the IAEA announced that it completed its investigation into the past possible military dimensions of Iran's nuclear program (PMDs). The IAEA will now work on its final assessment of the information gathered over the course of its investigation and submit a report to the IAEA Board of Governors by Dec. 15.

The roadmap agreed to by Iran and the IAEA specified that all of the activities, including a site visit to Parchin and meetings in Iran, needed to be finished by Oct. 15. The JCPOA also required Iran to cooperate with the IAEA to provide the information and access necessary before adoption day.

Iran provided the IAEA with initial clarifications and evidence required by the agency on Aug. 15. The IAEA responded with follow-up questions on Sept. 9, and agency officials visited Tehran on Sept. 20. IAEA Director General Yukiya Amano and Head of Safeguards Tero Varjoranta also visited the Parchin site, where the IAEA had evidence suggesting that explosives relevant to nuclear weapons were tested.

The investigation was based on evidence that the IAEA gathered and intelligence from other countries that Iran was engaged in an effort prior to the end of 2003 that spanned the full range of nuclear weapons development, from acquiring the raw nuclear material to working on a weapon that could eventually be delivered via a missile.

There were 12 main areas for investigation that the IAEA laid out in the November 2011 annex to its quarterly board report: 1) program management and structure; 2) procurement activities; 3) nuclear material acquisition; 4) nuclear components for an explosive device; 5) detonator development; 6) initiation of high explosives and associated experiments; 7) hydrodynamic experiments; 8) modeling and calculations; 9) neutron initiator; 10) conducting a test; 11) integration into a missile delivery vehicle; and 12) fusing, arming, and firing system.

Iran denies it pursued a warhead-development program and claims that the information on which the IAEA assessment is based is a fabrication and that some of the activities it engaged in were for legitimate non-nuclear purposes. 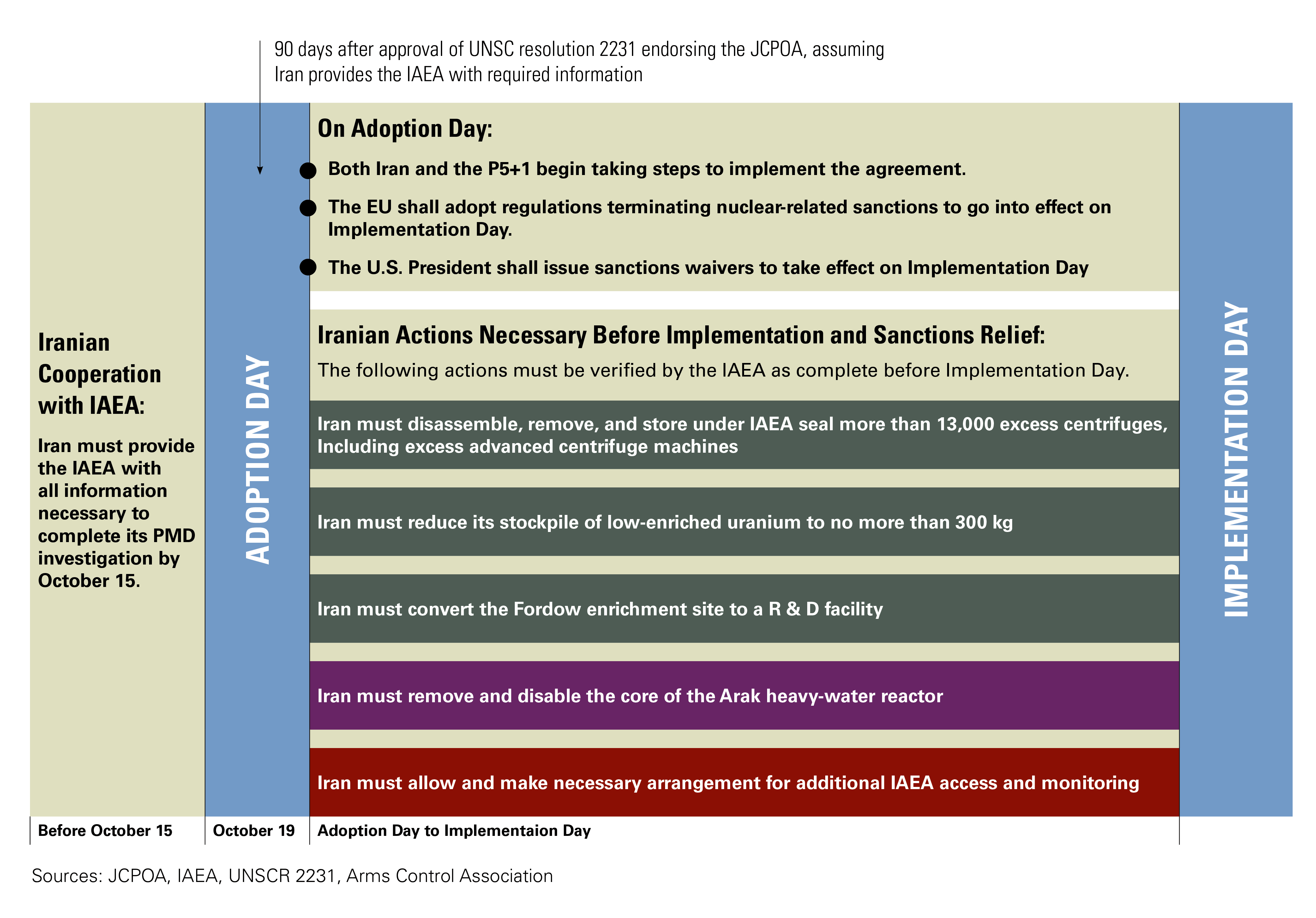 What Happens After Adoption Day?

With the national review processes completed and IAEA investigation on track, the nuclear deal will be formally adopted on Oct. 19. On adoption day, each side will begin taking the actions called for in the agreement to trigger implementation and the suspension of sanctions:

The actions that Iran must take include

The P5+1 actions include:

Implementation day occurs when the IAEA certifies that Iran completed its commitments. Salehi says Iran can take the necessary steps within two months. U.S. officials estimate it could take anywhere from 6-12 months.

On Oct. 11, Iran tested a new medium-range ballistic missile, the Emad. According to Iranian Defense Minister Brigadier General Hossein Dehqan, it is the first such missile with “navigation and strike controlling capability.”

The Emad appears to be a more accurate variant of Iran’s Shahab-3 ballistic missile, and consistent with Iran’s focus on improving its medium-range ballistic missiles rather than developing missiles of longer range. Despite the improvements, the Emad is unlikely to be capable of precision targeting at this point.

The Emad is believed to be a liquid-fueled system capable of carrying a 750-kilogram payload 1,700 kilometers. Iran last tested a missile with this range, the Shahab-3, in 2012.

While the JCPOA does not prevent Iran from testing ballistic missiles, UN Security Council Resolution 1929, which remains in effect until implementation day, prohibits Iran from the testing and developing of ballistic missiles capable of delivering a nuclear warhead. That designation is generally understood to be a missile capable of carrying a 500-kilogram payload over 300 kilometers.

U.S. State Department spokesperson Mark Toner said on Oc. 13 that the test “does appear to be a violation of resolution 1929” and the United States will raise the issue at the UN Security Council.

Iran has never considered itself bound by the nuclear and missile restrictions in Resolution 1929, or the previous UN Security Council resolutions on its nuclear program. Tehran views the restrictions as illegal and based on manufactured evidence that is was conducting experiments related to nuclear weapons development. Since the Security Council passed Resolution 1929 in June 2010, Iran has conducted at least five ballistic missile flight tests of medium-range systems.

After implementation day, restrictions from past resolutions on Iran, including 1929, are lifted and replaced by Resolution 2231, which endorses the deal and lifts UN sanctions. Resolution 2231 “calls upon” Iran “not to undertake any activity related to ballistic missiles designed to be capable of delivering nuclear weapons” for the first eight years of the JCPOA, or until the International Atomic Energy Agency (IAEA) reaches its broader conclusion on the nature of Iran’s nuclear program. This is weaker language than other provisions in Resolution 2231 which uses “shall comply” language.

While the Emad test is unhelpful, implementation of the JCPOA will ensure that Iran’s ballistic missiles cannot be fitted with nuclear warheads.