The Vice Chairman of the Joint Chiefs of Staff delivered an unusually clear and coherent speech on U.S. missile defense policy at the Center for Strategic and International Studies (CSIS) May 19 in Washington.  Although Adm. James A. Winnefeld, Jr. emphasized in his remarks that U.S. missile defenses should be of no concern to Russia or China, it is easy to see how parts of his comprehensive presentation could be viewed from Moscow or Beijing as hypocritical, or at least deeply ironic.

Not About Russia and China

During his presentation, Winnefeld reiterated the long-standing position of the United States that its strategic missile defenses are not intended to protect against a massive nuclear attack by Russia or China. To protect against such “existential threats,” he explained, would be “too hard and too expensive and too strategically destabilizing to even try.”

It is a principal pillar of U.S. missile defense policy that the strategic missile defenses based in Alaska and California are designed to protect against limited, emerging ballistic missile threats rather than against the more mature and much larger arsenals of Russia and China. This position is rooted in the Missile Defense Act of 1999 and has been consistently proclaimed by the last three American presidents. Not even the deep chill in U.S.-Russian relations induced by Russia’s invasion of Crimea and subversion of eastern Ukraine has prompted Obama administration officials to deviate from this line. 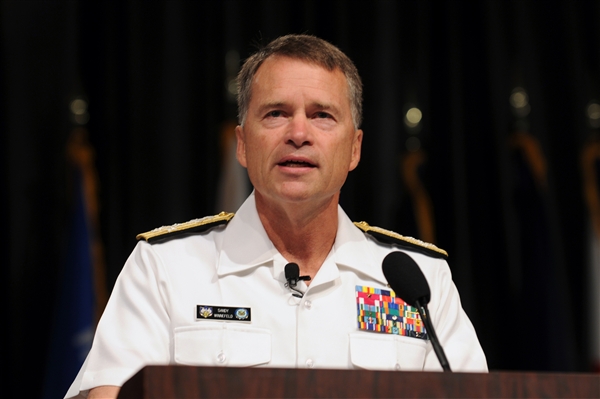 Winnefeld explained at CSIS that U.S. strategic missile defenses were “limited” and directed against the growing number of countries, which were trying to achieve the capability to launch catastrophic attacks against the United States – most immediately, North Korea, then followed by Iran. Although, he acknowledged that “neither nation has a mature ICBM capability, and both nations know, full well, they would face an overwhelming U.S. response to any attack…it’s our policy to stay ahead of the threat.”

“Staying ahead of the threat” is a refrain, which has been sounded with increasing  frequency  by missile defense proponents in Washington lately, especially during discussions of defense budget priorities when critics note the absence of an imminent North Korean or Iranian ICBM threat. For example, both Assistant Secretary of State for Arms Control and Compliance FrankRose and Deputy Assistant Secretary of Defense for Nuclear and Missile Defense Policy Elaine Bunn emphasized the importance of “staying ahead of the threat” in remarks to a CSIS missile defense discussion on April 7.

The View from Moscow…and Beijing

For suspicious minds in Moscow and Beijing, Winnefeld’s attempts to provide assurances that U.S. missile defense systems are not directed at Russian or Chinese nuclear weapons, are likely to be ineffective or even counterproductive.

Winnefeld acknowledges that missile defenses cannot assure national survival from massive nuclear attack by Russia or China (“[our] top national security interest”). He also admits that, even with North Korea and Iran, “we don’t necessarily expect to stop every single missile.” But he nonetheless asserts that U.S. strategic missile defenses are designed to protect against catastrophic attacks by North Korea and Iran. The implication here seems to be that the nuclear weapons managing to get through such defenses would not necessarily create catastrophic effects.

U.S. officials explain that the U.S. SM-3 Block IIA missile defense interceptors to be deployed in Poland by 2018 are intended to protect Europe against Iranian intermediate-range ballistic missiles (even though such missiles are not yet in sight). This interceptor is being co-developed by the United States and Japan, for deployment in Asia as well as in Poland. However, Russia is well aware of the stated intensions for these systems, but is just as likely to envision that these interceptors will be deployed off the coasts of Russia on the 33 warships Winnefeld identifies as compatible and “already afloat.

Meanwhile, the P5+1 negotiators are finalizing with Iran the comprehensive  agreement that would block all pathways to a nuclear warhead for such missiles until beyond 2025. But U.S. officials have not suggested that the 2018 deployment schedule could be halted or suspended in commensurate response to progress made containing the potential threat to Europe from long-range, nuclear-tipped Iranian ballistic missiles. This silence undoubtedly raises questions in Moscow about what is adaptive in the “European Phased Adaptive Approach.”

Winnefeld’s effort to stress the need for prioritization and proper sequencing in missile defense efforts may sow additional doubts in Russia and China about the actual target of U.S. missile defenses. In spite of Winnefield’s principal focus on defending against emerging ICBM threats to the homeland, placing support for allies and partners and for American citizens and troops abroad “farther down” on the list of priorities, he argued that homeland cruise missile defense was becoming more important than regional ballistic missile defense.

Winnefeld’s stated reason for stressing the growing importance of cruise missiles was that “the element of surprise is nearly impossible with an ICBM attack…[but] we can’t necessarily say the same for a cruise missile attack,” which could threaten U.S. command and control capabilities in advance of a ballistic missile barrage. In labeling cruise missiles as “first strike” weapons, Winnefeld potentially undermines State Department Undersecretary Rose Gottemoeller’s recent characterization of air-launched systems as “slow flyers” that are “inherently more stabilizing.”

Meanwhile, the Defense Department has requested 1,000-1,100 long-range stand-off (LRSO) weapons (presumably cruise missiles) to keep the bomber leg of the nuclear triad viable in coming decades. For a four-star U.S. admiral to imply (if not explicitly state) he wants a higher priority assigned to defending against a first-strike attack by Russian nuclear cruise missiles will suggest to Moscow that U.S. missile defenses are oriented against Russian weapons after all. It will also increase Moscow’s concerns about the first-strike threat U.S. cruise missiles could pose to Russia’s command-and-control centers.

The Offense-Defense Relationship — An Old Backstory

Fearing U.S. technological potential, the Russian government and its Soviet predecessor have long sought to limit U.S. strategic defense efforts. For much of the Cold War, the United States harbored similar fears about Soviet missile defense efforts. These mutual concerns led to conclusion of the Anti-Ballistic Missile (ABM) Treaty in 1972. For three decades, this treaty (as amended) limited each side to 100 strategic missile defense interceptors at one site, providing a stabilizing anchor for both sides to negotiate limitations on strategic offensive forces. These agreements included  SALT I and SALT II in the 1970s and START I and START II in the 1990s.

For Moscow, President Ronald Reagan’s Strategic Defense Initiative (SDI), announced in 1983, threatened to disrupt the overall strategic balance, which had been undergirded by a series of arms control agreements. Reaffirmation by the U.S. Congress of the traditional interpretation of the ABM Treaty’s limits on SDI systems and subsequent negotiation in 1997 of a protocol to the treaty, defining the technical boundary between theater and strategic missile defenses, helped convince Moscow to accept significant reductions in strategic offensive force levels.

Conversely, U.S. failure to pledge continuing fidelity to the ABM Treaty and to ratify the 1997 Demarcation Protocol, stiffened Russia’s resistance to further strategic reductions. The 2002 decision of President George W. Bush to withdraw from the ABM Treaty and deploy national missile defenses was the reason Moscow cited for refusing to ratify START II, the treaty that would have eliminated ICBMs with multiple independently targetable reentry vehicles, in both countries’ arsenals.

“Mirror imaging” is rightly understood as a flawed and incomplete approach to understanding an adversary’s perspective. But this does not mean that one side can ignore how its own “logical” explanations are received by the other. The logic of U.S. missile defense policy is ensnared in some unavoidable contradictions.

Adm. Winnefeld’s May 19 presentation brought this contradictory logic to the fore:

-- We must stay ahead of the North Korean and Iranian ICBM threats, which have not yet materialized, even if it halts or reverses progress in reducing the existential threats we face from Russia and China. We will therefore make no strategic arms control agreements, which would restrict our future missile defense options in any way.

-- Protecting the homeland against nuclear attack is our highest priority, but strategic missile defense against Russia (and China) is too hard, too expensive, and too strategically destabilizing to succeed. We will therefore concentrate on building an imperfect defense against a catastrophic nuclear attack of the homeland by lesser nuclear powers (or a first-strike attack by Russian cruise missiles).

-- We want the governments in Moscow and China to be realistic about the limits of U.S. missile defenses and take our political assurances seriously, joining us in negotiating reductions in strategic offensive arms arsenals.

It should be no surprise that the Russians and Chinese arrive at a different bottom line in working through this logic chain. They see a real possibility that U.S. missile defense capabilities could expand rapidly and current missile defense plans could change. They consequently intend to fashion their own strategic policies to “stay ahead” of the potential threat unconstrained U.S. missile defenses pose.