Authored by Kelsey Davenport on February 6, 2015

The February 5 Washington Post editorial, “The emerging Iran nuclear deal raises major concerns,” accuses the Obama administration of moving the goal post on an Iranian nuclear deal. The editorial says, “where it once aimed to eliminate Iran’s ability to enrich uranium, the administration now appears ready to accept an infrastructure of thousands of Iranian centrifuges.” False. Zero enrichment is not, and has not, been the Obama administration’s aim for a nuclear agreement. Nor is it necessary to prevent Iran from acquiring a nuclear weapon. The goal of U.S. policy has been, is, and must be to secure verifiable limits on Iran's capacity to produce nuclear material for a bomb and establish tougher monitoring to deter any dash for nuclear weapons.

Iran already has a nuclear weapons capability, but is not pursing nuclear weapons. According to the U.S. 2007 National Intelligence Estimate, Iran had developed a range of technologies, including uranium enrichment, nuclear warhead mechanics, and delivery systems, that would give it the option to launch a nuclear weapons development effort, if it so choses.

No nuclear deal with Iran can turn back the clock and erase that knowledge. It is not possible, as the editorial suggests, to “eliminate” Iran’s “potential to produce nuclear weapons.” But it is possible through a comprehensive agreement to verifiably limit and monitor a peaceful Iranian nuclear program.

During the early years of the Bush administration, pursuing a deal that eliminated Iran’s uranium-enrichment program may have been feasible. At that time, Iran only had a few hundred centrifuges. Now, having spent billions of dollars and developed 20,000 centrifuges, Iran is not going to accept zero enrichment. Insisting on it would not eliminate Iran’s nuclear weapons capability, and it’s not necessary to block Iran’s pathways to nuclear weapons. It would be naïve and unrealistic for the Obama administration to hold out for dismantlement.

Rather, the Obama administration and its P5+1 allies (China, France, Germany, Russia, and the United Kingdom) are rightly pursuing a combination of limits on Iran’s nuclear program and stringent monitoring and verification. The goal of this package is to block Iran’s uranium and plutonium pathways to nuclear weapons and to guard against any covert nuclear weapons program. 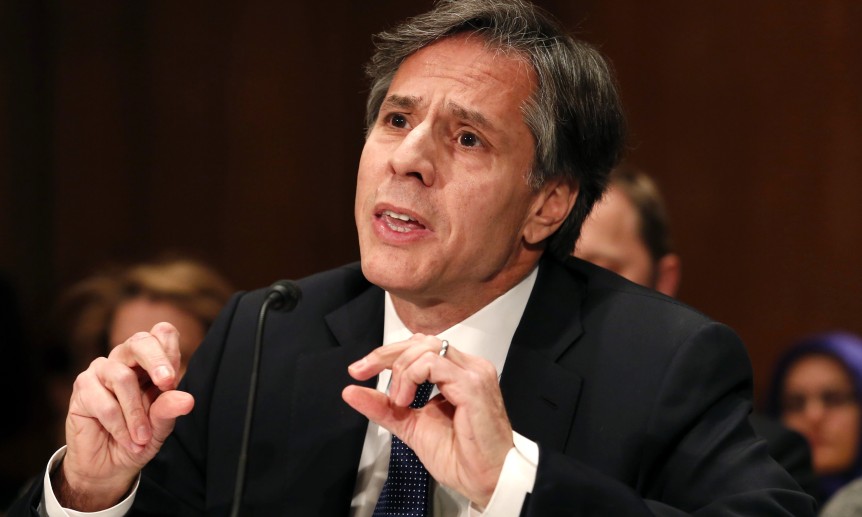 BLINKEN: The goal was to do two things. The goal was to make sure that the pathways that Iran has to a bomb, plutonium path, uranium path and a covert path were effectively cut off. And to do that, and we've been at this for quite a while. We determined that making sure under any agreement that it would take them at least one year to produce enough fissile material for one bomb would answer that need….

Second, as you know, the fissile material is not the only piece of this. Actually having a weapon, weaponization is critical, and then having the means to deliver it. The reason the fissile material piece is what we've been focused on is it's the most visible thing. It's the thing that we can see that we can verify. And that's the best way to give us the assurance that we need that Iran would not pose a threat with a nuclear program.

Additionally, accepting an “infrastructure of thousands of Iranian centrifuges” does not necessarily put Tehran on the brink of obtaining enough weapons-usable material for a bomb.

Limiting Iran’s centrifuge numbers is important, but it’s only one element of a complex equation that determines how quickly Tehran could dash toward a bomb. The levels of uranium enrichment, the size of Iran’s stockpiles of enriched-uranium gas, and the efficiency of the centrifuges all play an important role.

The Obama administration is pursuing a combination of these factors to ensure that it would take Iran at least 12 months to obtain enough weapons-grade uranium, (25kg of 90 percent U235) – that is a realistic goal that meets U.S. national security concerns.

As Blinken said in the hearing, “…in an ideal world, would we want them to have zero enrichment? Sure. Is that something they will ever agree to? I think the answer is probably not, in fact. And second, our partners are unlikely to stick around in terms of implementing the sanctions regime if that has to be the bottom-line test. So we're focused on what is achievable in a way that materially answers our security concerns and those of our partners.”

The Washington Post editorial also misleads readers about the role of Congress in the event of a comprehensive nuclear deal and expresses the concern that the president will impose the deal “unilaterally.” But it was Congress that granted the president statutory authority to waive certain sanctions on Iran. Exercising that authority if Iran is complying with a comprehensive, verifiable, nuclear agreement is in the best interest of U.S. national security. If Iran meets the terms of an agreement, a congressional vote will be required, down the road, to eventually remove key nuclear-related sanctions on Iran.

A good nuclear deal with Iran is within reach. It is important now for policymakers to understand what is possible and what is necessary in a comprehensive agreement and give negotiators a chance to cinch the final details.