Authored by Greg Thielmann on January 7, 2015

It has been obvious for decades that advances in strategic ballistic missile defenses can complicate efforts to maintain a balance in strategic offensive forces while reducing overall nuclear arsenals. The two Cold War superpowers addressed this problem by negotiating the Anti-Ballistic Missile (ABM) Treaty in 1972, which limited the breadth and scope of ballistic missile defense (BMD) deployments.

But U.S. withdrawal from the ABM Treaty in 2002 and enthusiastic pursuit of BMD by the United States has again brought the negative impact of missile defense on nuclear arms control efforts to the fore. 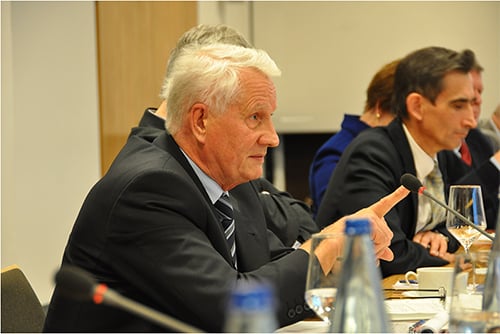 In 2013, a trilateral “Deep Cuts Commission” was formed, assembling 21 diplomatic, academic, and military experts from the United States, Germany, and Russia to explore ways to achieve further progress in U.S.-Russian arms control. Based on deliberations of the commissioners, a joint report was issued in April 2014, “Preparing for Deep Cuts: Options for Enhancing Euro-Atlantic and International Security.”

The commission’s first report examined a series of challenges to further nuclear reductions.  With regard to BMD, three key recommendations were highlighted:

A December 2014 workshop of the Deep Cuts Commission again addressed the BMD-arms control conundrum, building on the previous year’s discussions to elaborate possible approaches for overcoming the obstacles posed by BMD to achieving further reductions in U.S. and Russian nuclear arsenals.

Ever since ICBMs  were first deployed, both the United States and the Soviet Union had conducted research and development of weapons to intercept them. Although different types of strategic missile defense systems have been deployed by both countries over the years, none have been able to render ICBMs “impotent and obsolete,” the goal President Ronald Reagan articulated for his Strategic Defense Initiative (SDI) in 1983.

Despite the grandiose visions of BMD enthusiasts and their congressional backers, successive U.S. administrations have repeatedly scaled back the objectives for strategic missile defenses. U.S. program objectives in the 1960s evolved from protecting the U.S. population against a massive Soviet missile attack to protecting the population from a more limited Chinese missile attack, and then only to protecting ICBM silos from a first-strike Soviet attack.

In the 1990s, strategic BMD was further downgraded to the “National Missile Defense” program of President Bill Clinton, with the still more modest goal of defending against future ICBMs of emerging nuclear weapons states. Although this new programmatic effort was solemnified by the U.S. Congress in the 1999 Missile Defense Act , the decision to deploy the first Ground-Based Interceptor (GBI) was only made later by President George W. Bush.

In spite of an investment of approximately $40 billion (and counting) , the Ground-Based Midcourse (GMD) interceptors and their kinetic-kill vehicles have not yet proven themselves to be reliable. Thirty GMD missiles are now stationed in Alaska and California.  In response to provocative behavior by North Korea, President Barack Obama pledged to deploy 14 more by 2017.

In parallel with the deployment of this strategic BMD, the United States has also deployed the Terminal High Altitude Area Defense (THAAD) and SM-3 Aegis theater missile defense systems. The SM-3 is to be deployed on both ships worldwide and ashore in Europe as part of the European Phased Adaptive Approach (EPAA) against emerging nuclear powers. Designed for defense against short-, medium-, and intermediate-range missiles, none of these weapons are intended to target Russian or Chinese strategic nuclear forces. Moscow, has, however, vehemently objected to this “global anti-missile defense system” and highlights its proximity (both actual and potential) to Russia’s borders.

It is important to remember that the missile defense issue involves projections of hypothetical future potential rather than empirical assessments of current capabilities. Neither U.S. nor Russian missile defense systems are even remotely capable of thwarting a strategic nuclear strike against the other. Many experts doubt that U.S. strategic interceptors could successfully defend against even relatively unsophisticated ICBMs.

The recent workshop of the Deep Cuts Commission included further elaboration of ideas floated in its April 2014 report. In spite of the severe political strains in the U.S.-Russian relationship following the Ukraine crisis, there was a glimmer of optimism among workshop participants about the potential opening for arms control created by growing budget pressures in both Moscow and Washington.

It appears increasingly likely that neither the United States nor Russia can afford to modernize all three legs of their respective strategic triads in the manner currently planned. Sooner or later both sides will view negotiating lower levels of the other side’s offensive forces as a preferred route to enhancing security.

It follows that both sides will have to address some of the current obstacles on the path to achieving lower levels of strategic offensive arms – including advanced conventional weapons, space-based weapons, and unconstrained strategic missile defenses. An obvious first step is for both sides to be willing to hold preliminary discussions on these issues.

One should recall what followed the interruption in U.S.-Soviet nuclear arms control talks in the 1980s, precipitated by the Soviet walkout of the Geneva Intermediate-Range Nuclear Forces (INF) Treaty negotiations in response to NATO’s intermediate-range nuclear missile deployments. In spite of the Reagan administration’s opposition to any limits on SDI, it ultimately agreed to add “defense and space” to the negotiating agenda, allowing for the resumption of negotiations and resulting in the INF Treaty and further progress on what became the first Strategic Arms Reduction Treaty.

Ideas for Addressing the Missile Defense Challenge to Arms Control

The logjam over missile defense looms largest among the obstacles to deep cuts.  The Hamburg workshop’s “track 2” discussion informs my offering of relevant suggestions:

Both Russia and the United States depend on their respective BMD systems to blunt the threat posed by the tactical and theater ballistic missiles of potential opponents. But both also have strong reasons to ensure that strategic BMD systems do not end up destabilizing the bilateral nuclear balance on which international stability still depends and sabotaging prospects for further reductions in nuclear arms.

The U.S., Russian, and German experts on the Deep Cuts Commission will be offering further ideas on this score in their Spring 2015 report.