Recovery from the nuclear attack depended on trust in government

By NAN RANDALL and WILLIAM KINCADE
Special to the St. Petersburg Times
February 28, 1979

The President was reviewing the proposals for the First Five-Year Recovery Program, replacement for the former federal annual budget, before his press conference on the plan. Eighteen months had passed since the nuclear attack. In the meantime, federal reconstruction efforts had proceeded on an ad hoc basis, without a comprehensive, long-range plan.

"Mr. President, although it is more than a year since the January War, we are still having difficulty in planning and budgeting with any confidence," said the director of the office of emergency economic planning. "There are so many new variables that we barely understand; there are no economic recipes for coping with our situation. So we will have to be somewhat flexible about the goals and targets in this first five-year program.

"Our long-term goal is simply this: In 10 years, or less, if possible, we want the average share per person of the Gross National Product (GNP) to be what it was before the attack, allowing for the shrunken population and GNP, of course. This will mean continued hardship and austerity in the meantime. 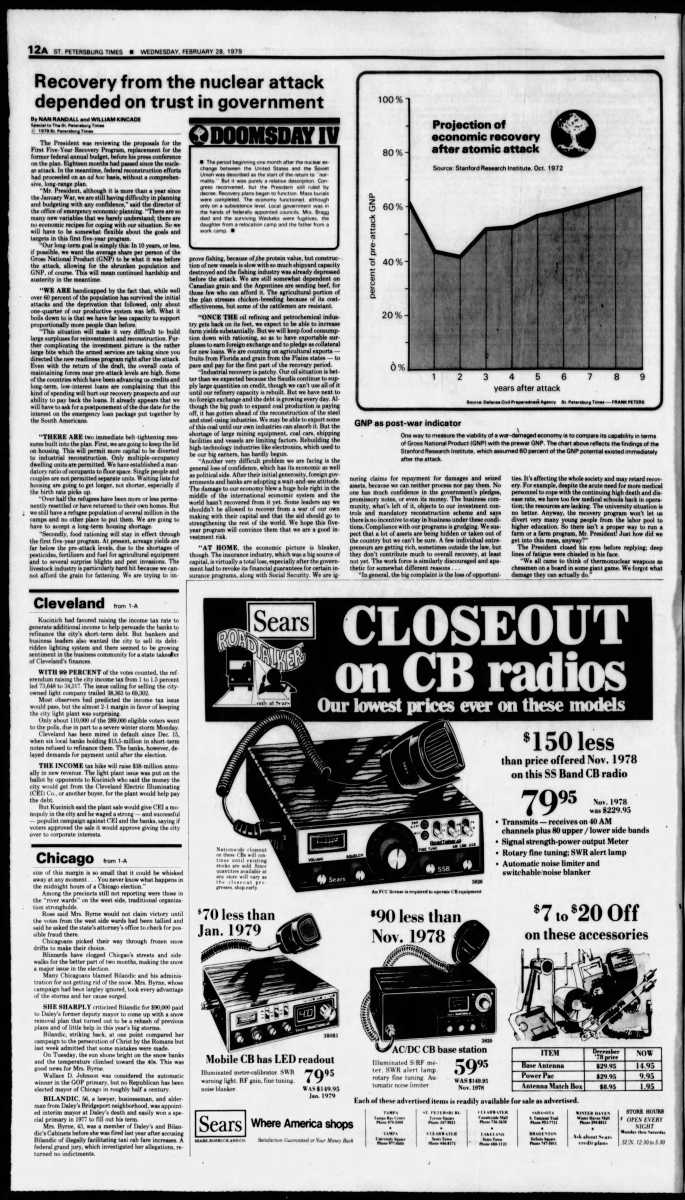 "WE ARE handicapped by the fact that, while well over 60 percent of the population has survived the initial attacks and the deprivation that followed, only about one-quarter of our productive system was left. What it boils down to is that we have far less capacity to support proportionally more people than before.

"This situation will make it very difficult to build large surpluses for reinvestment and reconstruction. Further complicating the investment picture is the rather large bite which the armed services are taking since you directed the new readiness program right after the attack. Even with the return of the draft, the overall costs of maintaining forces near preattack levels are high. Some of the countries which have been advancing us credits and long-term, low-interest loans are complaining that this kind of spending will hurt our recovery prospects and our ability to pay back the loans. It already appears that we will have to ask for a postponement of the due date for the interest on the emergency loan package put together by the South Americans.

"THERE ARE two immediate belt-tightening measures built into the plan. First, we are going to keep the lid on housing. This will permit more capital to be diverted to industrial reconstruction. Only multiple-occupancy dwelling units are permitted. We have established a mandatory ratio of occupants to floor space. Single people and couples are not permitted separate units. Waiting lists for housing are going to get longer, not shorter, especially if the birth rate picks up.

"Over half the refugees have been more or less permanently resettled or have returned to their own homes. But, we still have a refugee population of several million in the camps and no other place to put them. We are going to have to accept a long-term housing shortage.

"Secondly, food rationing will stay in effect through the first five-year program. At present, acreage yields are far below the pre-attack levels, due to the shortages of pesticides, fertilizers and fuel for agricultural equipment and to several surprise blights and pest invasions. The livestock industry is particularly hard hit because we cannot afford the grain for fattening. We are trying to improve fishing, because of the protein value, but construction of new vessels is slow with so much shipyard capacity destroyed and the fishing industry was already depressed before the attack. We are still somewhat dependent on Canadian grain and the Argentines are sending beef, for those few who can afford it. The agricultural portion of the plan stresses chicken-breeding because of its cost-effectiveness, but some of the cattlemen are resistant.

"ONCE THE oil refining and petrochemical industry gets back on its feet, we expect to be able to increase farm yields substantially. But we will keep food consumption down with rationing, so as to have exportable surpluses to earn foreign exchange and to pledge as collateral for new loans. We are counting on agricultural exports —fruits from Florida and grain from the Plains states — to pace and pay for the first part of the recovery period.

"Industrial recovery is patchy. Our oil situation is better than we expected because the Saudis continue to supply large quantities on credit, though we can't use all of it until our refinery capacity is rebuilt. But we have next to no foreign exchange and the debt is growing every day. Although the big push to expand coal production is paying off, it has gotten ahead of the reconstruction of the steel and steel-using industries. We may be able to export some of this coal until our own industries can absorb it. But the shortage of large mining equipment, coal cars, shipping facilities and vessels are limiting factors. Rebuilding the high-technology industries like electronics, which used to be our big earners, has hardly begun.

"Another very difficult problem we are facing is the general loss of confidence, which has its economic as well as political side. After their initial generosity, foreign governments and banks are adopting a wait-and-see attitude. The damage to our economy blew a huge hole right in the middle of the international economic system and the world hasn't recovered from it yet. Some leaders say we shouldn't be allowed to recover from a war of our own making with their capital and that the aid should go to strengthening the rest of the world. We hope this five-year program will convince them that we are a good investment risk.

"AT HOME, the economic picture is bleaker, though. The insurance industry, which was a big source of capital, is virtually a total loss, especially after the government had to revoke its financial guarantees for certain insurance programs, along with Social Security. We are ignoring claims for repayment for damages and seized assets, because we can neither process nor pay them. No one has much confidence in the government's pledges, promissory notes, or even its money. The business community, what's left of it, objects to our investment controls and mandatory reconstruction scheme and says there is no incentive to stay in business under these conditions. Compliance with our programs is grudging. We suspect that a lot of assets are being hidden or taken out of the country but we can't be sure. A few individual entrepreneurs are getting rich, sometimes outside the law, but they don't contribute much to overall recovery, at least not yet. The work force is similarly discouraged and apathetic for somewhat different reasons …

"In general, the big complaint is the loss of opportunities. It's affecting the whole society and may retard recovery. For example, despite the acute need for more medical personnel to cope with the continuing high death and disease rate, we have to few medical schools back in operation; the resources are lacking. The university situation is no better. Anyway, the recovery program won't let us divert very many young people from the labor pool to higher education. So there isn't a proper way to run a farm or a farm program, Mr. President! Just how did we get into this mess, anyway?"

The President closed his eyes before replying; deep lines of fatigue were chiseled in his face.

"We all came to think of thermonuclear weapons as chessmen on a board in some giant game. We forgot what damage they can actually do."