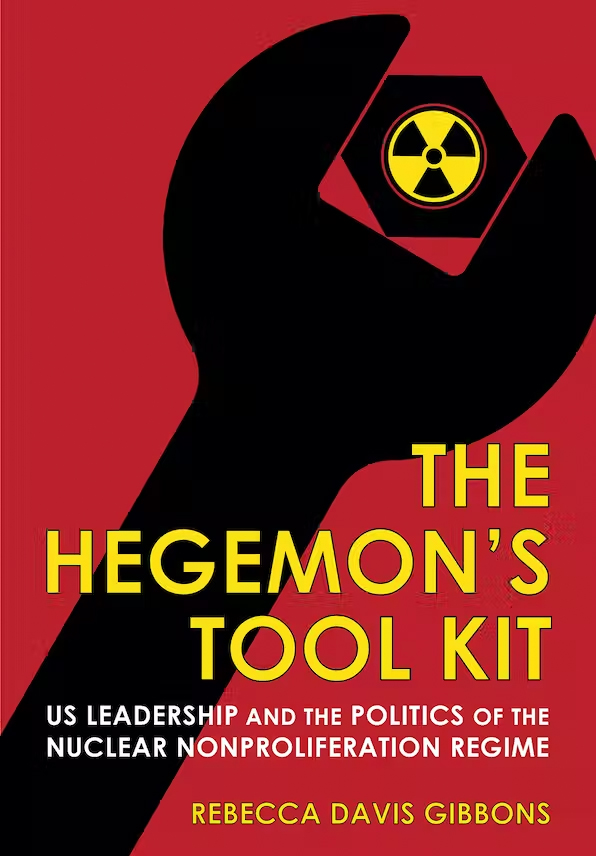 The Hegemon’s Tool Kit: US Leadership and the Politics of the Nuclear Nonproliferation Regime
By Rebecca Davis Gibbons
Cornell University Press
2022

Reviewed by Douglas B. Shaw

Rebecca Davis Gibbons’ The Hegemon’s Tool Kit: US Leadership and the Politics of the Nuclear Nonproliferation Regime is an insightful, readable, and theory-driven explanation of how the United States built and maintains the nuclear nonproliferation regime. It operationalizes a command of international relations scholarship on how the distribution of material power among states is reflected in the global order and fills a critical hole in the literature by explaining adherence to the nuclear nonproliferation regime. Students of security studies and the public will enjoy Gibbons’ sharp narration of the blocking and tackling maneuvers of nonproliferation diplomacy. Policymakers will benefit from her clarion warning that “[w]hen the United States does not prioritize the regime, it weakens.”

The book is an important addition to a powerful new wave of literature on nuclear proliferation and nonproliferation that centers U.S. leadership within the nuclear Nonproliferation Treaty (NPT) regime. Other recent examples include Rupal Mehta’s Delaying Doomsday: The Politics of Nuclear Reversal; Rachel Whitlark’s All Options on the Table: Leaders, Preventive War, and Nuclear Proliferation; and Vipin Narang’s Seeking the Bomb: Strategies of Nuclear Proliferation. Using The Hegemon’s Tool Kit as a lens for viewing a global nonproliferation regime as a product of U.S. influence is jarring, especially in light of persistent concerns among many states about the NPT’s discriminatory nature. Its focus on nonproliferation behavior rather than proliferation behavior uniquely makes unflinchingly plain the hegemon’s role as one who usually writes “the first draft and finances the effort.”

Gibbons explains regime adherence—the act of states agreeing to their commitments to be bound by the NPT and associated agreements—as a function of U.S. efforts to encourage each state to undertake these various nonproliferation commitments. U.S. encouragement takes the form of low-cost diplomacy, such as messages delivered by diplomats from U.S. embassies or at the United Nations; high-cost diplomacy, such as direct requests between national leaders; positive inducements, such as offers of peaceful nuclear assistance; and coercion, such as threats to withhold other international assistance. Gibbons observes that U.S. diplomacy promoting the NPT regime is more or less effective depending on how deeply embedded the target state is in the U.S.-led international order.

Chapter 2 briefly describes the actions taken by each U.S. administration from President Franklin D. Roosevelt to President Donald Trump to promote adherence to the nuclear nonproliferation regime. This gives the reader an intuitive grasp of how much effort different presidents put into advancing nonproliferation and how much success they have had as a result. The author describes this varying presidential performance against a steady institutional backdrop of a focused U.S. nonproliferation bureaucracy. 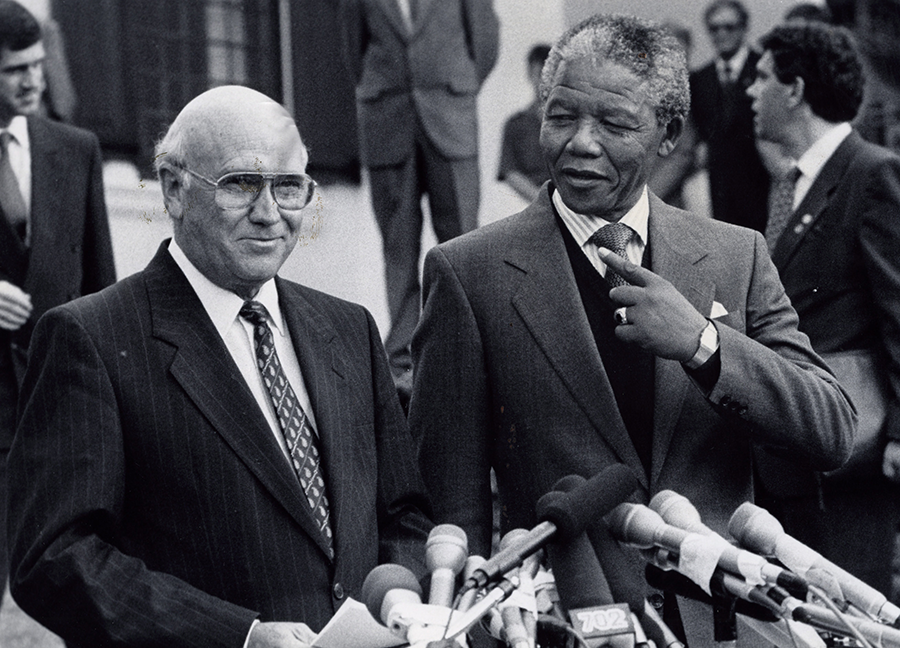 The author then tests her theoretical explanation of why states adhere to the various nonproliferation agreements by using case studies representing multiple steps in the construction of the regime. She examines how the United States acted to bring Japan, Indonesia, Egypt, and Cuba into NPT membership, showcasing the range of the hegemon’s tools across a range of states with varying degrees of embeddedness in the U.S.-led international order. Next, the U.S. global campaign to indefinitely extend the NPT in 1995 is viewed through the lenses of Japan, Indonesia, South Africa, and Egypt. Finally, Gibbons details U.S. efforts to promote adoption by Japan, Indonesia, and (unsuccessfully) Egypt of the International Atomic Energy Agency (IAEA) Model Additional Protocol.

Her case selection in these three empirical chapters is elegant and parsimonious. Japan’s story carries the reader through that country’s flirtation with nuclear armament, its commitment to the ultimate goal of nuclear disarmament within limits set by its reliance on U.S. extended deterrence, its development of a vast nuclear power program unique in a non-nuclear-weapon state, and its intense sensitivity to U.S. policy signals, given Japan’s close alignment with the United States. Regional security considerations, turbulent domestic politics, and dynamics as a leader of the Non-Aligned Movement have caused a wide variation in Egypt’s receptivity to U.S. nonproliferation leadership, including its long-standing rejection of adopting an additional protocol to its safeguards agreement. South Africa’s story encompasses the complex interaction of a revolutionary government coming to terms with an imperative to pursue a justice agenda while navigating nuclear disarmament under intense U.S. scrutiny.

The Cuban case shocks the reader with Soviet Foreign Minister Andrei Gromyko’s claim, just five years after the Cuban missile crisis, that Cuba’s participation in the nonproliferation regime “does not relate to the Soviet Union” and U.S. Department of State official John Bolton’s unsubstantiated claim in 2002 that Cuba had a biological weapons program that might lead the United States to attack. Bolton’s threat in the context of the U.S. invasion of Iraq apparently coerced Cuba into finally joining the NPT and was “the opposite of what security theory would predict” and what North Korea did. Indonesia’s journey invites the reader to view the nonproliferation regime through the hopes and challenges that nuclear power poses for a developing economy. These cases not only cover theoretically important questions related to Gibbons’ theory, but also give the reader a solid introduction to the practice of nonproliferation diplomacy.

Although crucial to international security, the NPT is not the best imaginable version of itself. Gibbons observes how the United States has worked to shore up the treaty with other measures, including the Nuclear Suppliers Group (NSG) and the IAEA Model Additional Protocol, but U.S. preferences may not always be the best to strengthen the regime. For example, the U.S. emphasis on universality is not the only possible measure of goodness or effectiveness of the regime. States are not equally interested in or adequately resourced to prevent nuclear proliferation, as Gibbons demonstrates in her discussion of the developing world’s low interest in adopting an additional protocol. Regional groupings, such as the implementing bodies for zones free of weapons of mass destruction (WMD), may be superior mechanisms for strong nonproliferation engagement than UN delegations working from New York or Geneva.

Gibbons describes U.S. negotiator Tom Graham’s globe-trotting campaign to secure indefinite extension of the NPT, a campaign needed in part to bind the ambassadors at the United Nations, who normally had wide decision-making discretion, to the considered national positions of their governments. Similarly, although the NPT’s indefinite extension was achieved without meeting Egypt’s demands, the issue of a WMD-free zone in the Middle East surfaced again at the 2010 NPT Review Conference and remains unresolved. Mohamed ElBaradei’s service as Egyptian vice president following his leadership of the IAEA seems deeply relevant to Egypt’s nonproliferation story, but is missing from this narrative.

The author explores the role of nuclear power in nuclear nonproliferation, emphasizing the important changes made by the addition of the NSG and the additional protocol to the regime. Additional research could further illuminate how the danger of climate change and the growing need for electricity, which is especially profound in the developing world, could drive groups of states to contribute positively to the further development of the nonproliferation regime. The wealth of detail Gibbons provides about supply-side constraints on enrichment and reprocessing should be matched by additional research on demand-side dynamics, which Scott Sagan has suggested is necessary to move beyond the “chimera” of a single measure of nuclear latency. Today’s understanding of enrichment and reprocessing “hedging” or “latency” could be enhanced by a more inclusive view of the role of nuclear energy and other energy technologies in meeting global climate and development challenges.

The new Treaty on the Prohibition of Nuclear Weapons (TPNW) may be a step toward a regime that is not exclusively the hegemon’s project. It is a potential remedy to Gibbons’ observation that, “after 50 years, the [NPT] no longer seems as fair to many of its members.” She documents the Trump administration’s imperious impertinence in sending a message to TPNW states-parties that “we believe you have made a strategic error and should withdraw your instrument of ratification or accession.” The Global Nuclear Energy Partnership experience of convening energy ministries rather than foreign ministries to discuss nonproliferation considerations has potential and should be further explored. Further research should look beyond how each past step in the nonproliferation regime prioritized U.S. goals and explore instead how the TPNW could be a first step toward prioritizing the goals of non-nuclear-weapon states.

Gibbons’ dire warning that “a period without a clear hegemon could endanger the regime” should awaken us not only to the fragility of the NPT regime but also to the opportunity to include more voices in solving the global problem of nonproliferation as a mechanism for preventing nuclear war. As the boundaries among nuclear nonproliferation and deterrence, arms control, and disarmament shift, Gibbons’ book offers an excellent starting point to imagine a stronger regime and a more secure future.

Douglas B. Shaw consults on nuclear weapons policy research and education and is a research professor of international affairs at The George Washington University’s Elliott School of International Affairs.