Russia blocked the 2022 nuclear Nonproliferation Treaty (NPT) Review Conference from reaching consensus on a substantive outcome document on Aug. 26 because of differences over the nuclear safety crisis caused by the Russian occupation of the Zaporizhzhia nuclear power plant in Ukraine. 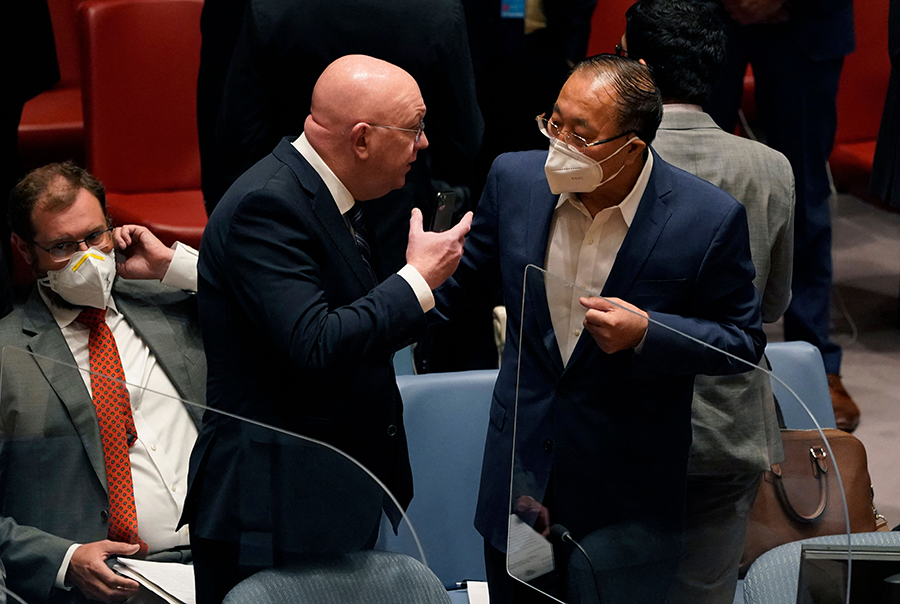 At a time of rising nuclear dangers, 151 NPT states-parties worked intensively Aug. 1–26 at UN headquarters to hammer out a document designed to assess implementation of the landmark treaty and identify actions to advance its core goals and objectives of disarmament, nonproliferation, and the peaceful uses of nuclear energy.

But the effort to agree on a joint declaration collapsed in the final hours of the conference when Russia demanded changes to several paragraphs in the 35-page draft outcome document, including those that stressed “the importance of ensuring control by Ukraine’s competent authorities” of the Zaporizhzhia facility.

Ukraine and dozens of other countries originally sought explicit references to Russia’s responsibility for the deterioration of safety at the nuclear plant, which was seized by Russia in March.

Russian and Ukrainian officials exchanged accusations over the course of the conference and in a special session of the UN Security Council on Aug. 10 about who bore responsibility for the shelling of the Zaporizhzhia facility, which remains occupied by Russian military forces. The text was modified in an effort to strike an acceptable balance, but in the end, Russia was alone in opposing the compromise language.

The result marks the second consecutive NPT review conference that failed to reach consensus on a final outcome document. Given the growing tensions among the five nuclear-armed NPT member states, the conference conclusion was not surprising. Never before has an NPT conference been convened in the midst of a major war in Europe involving one of the treaty’s three depositary states: the United States, the United Kingdom, and Russia.

In remarks following the meeting, conference president Gustavo Zlauvinen said that, despite the failure to reach consensus, “this should not detract from the fact that the states have engaged in sustained, in-depth negotiations…that brought us extremely close to an outcome document that contained agreed actions steps. This shows the commitment by all delegations to the treaty” and “provides a basis for momentum going forward.”

Zlauvinen cited the conference agreement on a procedural measure “to establish a working group to strengthen the review cycle to achieve more transparency and accountability and to accelerate the actions states have agreed to pursue.”

The conference breakdown also elicited expressions of disappointment and determination from many of the states-parties.“[T]he NPT will remain a fundamental and irreplaceable cornerstone of the rules-based order,” insisted Adam Scheinman, head of the U.S. delegation, in a closing statement on Aug. 26. “This month has shown that while we still have much work to do, we do agree on more than we disagree, and we are prepared to define ourselves by what we hold in common rather than by what divides us.”

Russia may have been alone in blocking consensus, but it was not the only nuclear-weapon state that resisted making clear commitments to fulfill NPT goals. As time ran out on the conference, many states-parties expressed unhappiness with various elements of the Aug. 25 draft final outcome document, but chose not to oppose consensus. Many non-nuclear-weapon states were displeased with the lack of ambition in the disarmament action plan after years of inaction.

“Costa Rica was prepared to join the consensus on the final document because of our commitment to the treaty…. In truth, the document was well below our expectations, falling short on concrete measures to advance us toward nuclear disarmament,” Maritza Chan, the Costa Rican ambassador to the United Nations, said in her closing statement on Aug. 26.

In his closing comments, Alexander Kmentt, the head of the Austrian delegation to the conference, noted “the dramatic trust and confidence deficit among some nuclear-weapon states.” They can agree on very little, he said, except the one area of “no forward movement on nuclear disarmament. This damages the NPT, puts the norm against the proliferation of nuclear weapons under duress, and reinforces the credibility deficit of this treaty on the implementation of [NPT] Article VI,” on disarmament.

In the final week of the conference, Zlauvinen invited the Finnish delegation to convene consultations involving some two dozen key states to try to iron out consensus language on the thorniest issues. Those negotiations included the NPT’s five nuclear-armed states (China, France, Russia, the UK, and the United States); the New Agenda Coalition (Brazil, Ireland, Mexico, New Zealand, South Africa, and Egypt); Indonesia, which chairs the Non-Aligned Movement; Austria; Iran; Japan; the Netherlands; Sweden; and Switzerland.

For example, the NPT states-parties could not agree on whether the conference should condemn recent threats of nuclear weapons use issued by Russian President Vladimir Putin on Feb. 24 and April 27 in the context of the Russian war on Ukraine. As Zlauvinen reminded delegates at the opening of the conference, “[W]e live in a time when the unthinkable—the use of nuclear weapons—is no longer unthinkable.”

Representatives from France, the UK, and the United States, along with their NATO allies, also criticized Putin’s nuclear threats and wanted the conference to condemn “irresponsible rhetoric concerning potential nuclear use intended for military coercion, intimidation, or blackmail” but not nuclear threats that “serve defensive purposes, deter aggression and prevent war,” according to a working paper issued by the three countries on July 29.

Many non-nuclear-weapon states, including Austria, Costa Rica, and Ireland, argued that such attempts to distinguish between nuclear threats are unhelpful and that all threats of nuclear use must be condemned as contrary to international law and the UN Charter. In the end, states could only agree that the final draft should commit the nuclear-weapon states “to refrain from any inflammatory rhetoric concerning the use of nuclear weapons.”

The topic of naval nuclear propulsion also drew significant attention. China and Indonesia expressed concerns about the nonproliferation implications of the AUKUS initiative announced in September 2021, by which the United States and the UK would share advanced nuclear submarine propulsion technology with Australia. The project will likely involve highly enriched uranium, which can be used for nuclear weapons, and creates unique challenges for maintaining International Atomic Energy Agency (IAEA) safeguards on the nuclear material.

A small group negotiated compromise text on this issue that simply noted “the topic of naval nuclear propulsion is of interest to the states-parties to the treaty” and “the importance of a transparent and open dialogue on this topic.”

The Chinese delegation also opposed references in the draft calling for a voluntary halt of fissile material production for nuclear weapons purposes, pending negotiation of a fissile material cutoff treaty.

Several state-parties called attention to the Treaty on the Prohibition of Nuclear Weapons (TPNW), which prohibits all nuclear weapons activities and aims to ban all nuclear weapons, as a mechanism that could encourage nuclear-weapon states to implement their NPT Article VI obligations. The draft text acknowledged the entry into force of the TPNW in 2021.

One of the most significant agreed elements in the draft conference outcome document was a pledge by Russia and the United States to fully implement the 2010 New Strategic Arms Reduction Treaty (New START) "and to pursue negotiations in good faith on a successor framework to New START before its expiration in 2026, in order to achieve deeper, irreversible, and verifiable reductions in their nuclear arsenals.”

Although the review conference failed to formally reach consensus, several states expressed hope that Washington and Moscow would fulfill their pledges to resume negotiations to further reduce the world’s two largest nuclear arsenals.

States-parties agreed that the next NPT review conference will be in 2026 with the next preparatory meeting in 2023.