The rocket boosting a new reentry vehicle for the future U.S. intercontinental ballistic missile (ICBM) system exploded 11 seconds after launch in its first test, setting the $100 billion nuclear modernization program off to a rocky start. 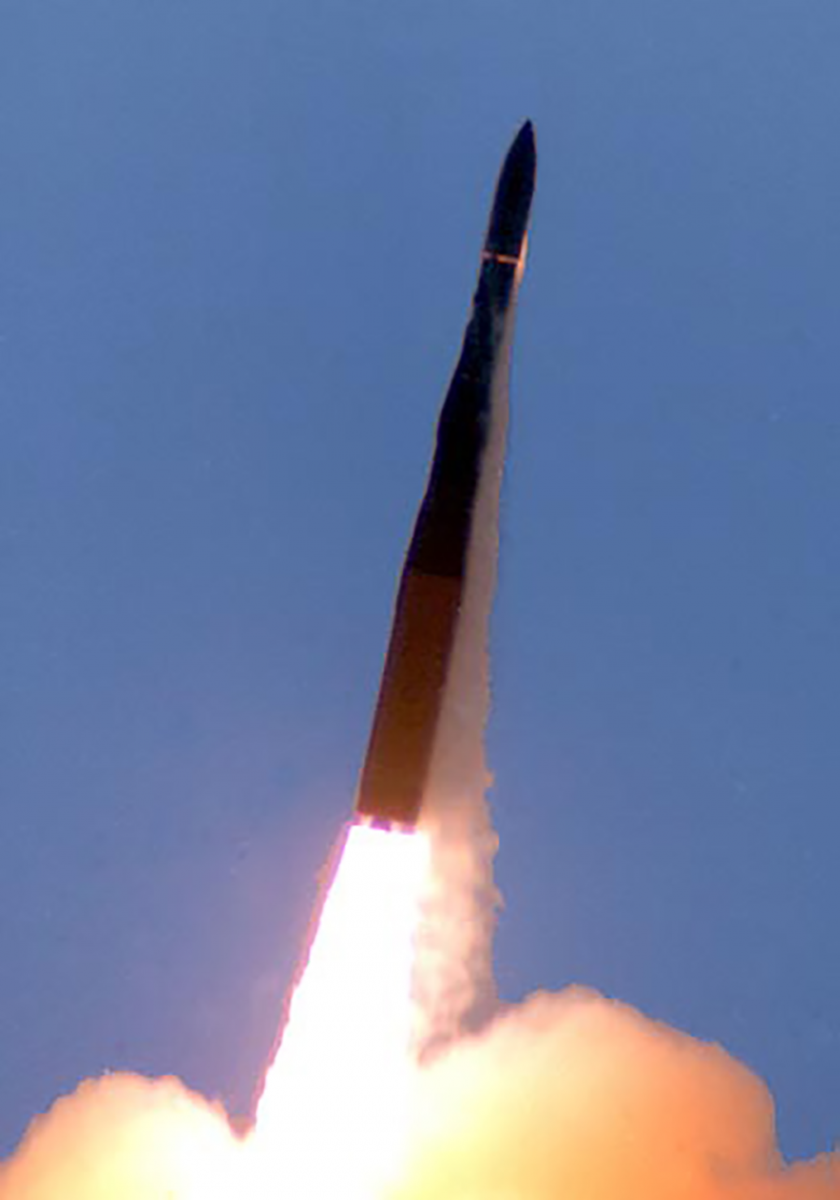 The test involved a Minotaur II+ rocket carrying a prototype Mark 21A reentry vehicle built by Lockheed Martin. The vehicle will house a W87-1 nuclear warhead, which is in the midst of a modification program administered by the National Nuclear Security Administration (NNSA). A nuclear warhead was not used during the July 6 test at Vandenberg Space Force Base in California.

“The test launch will demonstrate preliminary design concepts and relevant payload technologies in [an] operationally realistic environment,” said the Air Force Nuclear Weapons Center in a press release prior to the test. Following the failed test, the center commented only that “an investigative review board has been established to determine the cause of the explosion.”

The blast sparked a fire on the base, prompting the dispatch of local firefighters.

The rocket and reentry vehicle will be placed on the U.S. Air Force’s new LGM-35A Sentinel ICBMs. The Sentinel system was initially known as the Ground-Based Strategic Deterrent before its renaming in the spring. (See ACT, June 2022.)

The Air Force plans to purchase more than 650 Sentinel ICBMs to replace the existing fleet of 400 Minuteman III missiles, plus spares and test missiles, starting in fiscal year 2029. Testing of the Sentinel missiles, under development by Northrop Grumman, is slated to begin in 2024.

The Pentagon had scheduled a long-planned test of a Minuteman III ICBM for early August. Defense Secretary Lloyd Austin elected to delay the test by about two weeks due to heightened tensions with China over Taiwan, John Kirby, coordinator for strategic communications at the National Security Council, announced on Aug. 4. The department had cancelled another ICBM test in March. (See ACT, April 2022.)

“As China engages in destabilizing military exercises around Taiwan, the United States is demonstrating instead the behavior of a responsible nuclear power by reducing the risks of miscalculation and misperception,” said Kirby.

“These weak-kneed pearl-clutching attempts at appeasement hurt our readiness and will only invite further aggression by our adversaries,” Rogers said.

The rescheduled test took place on Aug. 16 at Vandenberg Space Force Base in California. “The ICBM’s reentry vehicle traveled approximately 4,200 miles to the Kwajalein Atoll in the Marshall Islands,” the Air Force said in a statement.

The service released on July 1 a draft report examining the environmental impact from the construction of the Sentinel system to include the missiles themselves, as well as their vast supporting infrastructure, and the decommissioning and disposal of the Minuteman III missile system. The Air Force began work on the statement in the fall of 2020.

The report found that the plan for replacing all Minuteman III missiles with Sentinel missiles will “have potentially significant adverse effects on cultural resources, public health and safety, socioeconomics, and utilities and infrastructure” in the short term and, in some cases, the long term.

As part of the report, the Air Force also had to evaluate possible alternative plans to the Sentinel system for the future of the ICBM force.

The Air Force eliminated these alternatives due to the perception that they did not meet all of the system requirements in areas such as sustainability, integration, performance, survivability, safety, and risk.

The service ultimately determined that only in pursuing the new Sentinel system would the United States be able “to continue to offer long-term tangible evidence to both allies and potential adversaries of our nuclear weapons capabilities, thus contributing to nuclear deterrence and assurance, and providing a hedge against arms competition.”

Notably, an alternative that the Air Force chose not to examine was reducing the size of the ICBM force to below 400, as some arms control experts have suggested.

“The current force level of 400 deployed ICBMs is not––and has never been––a magic number, and it could be reduced further for a variety of reasons, including those related to security, economics, or a good faith effort to reduce deployed U.S. nuclear forces,” Matt Korda of the Federation of American Scientists wrote in a July 13 blog post.

The Defense Department had solicited a study by the Carnegie Endowment for International Peace on potential alternatives for the land-based leg of the nuclear triad, to possibly include the reduction of the ICBM force. The study was to be completed by the end of January 2022, but has not been made public.

On the original timeline, that study would have been finished at a time when the Biden administration’s Nuclear Posture Review (NPR) also wrapped up, leaving little room for the study to influence the U.S. nuclear force posture in a meaningful way. The public release of the NPR has been delayed in part due to the Russian invasion of Ukraine in February, although it is unlikely that the Pentagon will deviate from pursuing the Sentinel program.

Congress supported the new ICBM program in fiscal year 2022 with $2.6 billion. (See ACT, January/February 2022.) In June, the House authorized $3.6 billion for the program in fiscal year 2023, but the defense authorization bill has yet to make its way through the Senate. The relevant pieces of appropriations legislation, which allow for actual spending, have not moved through either chamber. (See ACT, June 2022.)

Overall, the House approved a $37 billion boost to the Biden administration’s request of $813 billion for national defense for fiscal year 2023. The lawmakers rubber-stamped all nuclear modernization programs, including funding for the fleet of Columbia-class submarines, the B-21 Raider strategic bomber, and the long-range standoff weapon, an air-launched cruise missile.

The House also added $45 million for the development of a new sea-launched cruise missile and its associated nuclear warhead, which the Biden administration had not requested.