Amid growing tensions between Beijing and Washington, the visit to Taiwan by U.S. House Speaker Nancy Pelosi on Aug. 2 prompted unusually muscular and protracted maneuvers by the Chinese military. China’s top leaders, including President Xi Jinping, had long warned their U.S. counterparts to avoid showing support for what they call independence forces on Taiwan, insisting that such moves risked inviting a harsh Chinese military response. 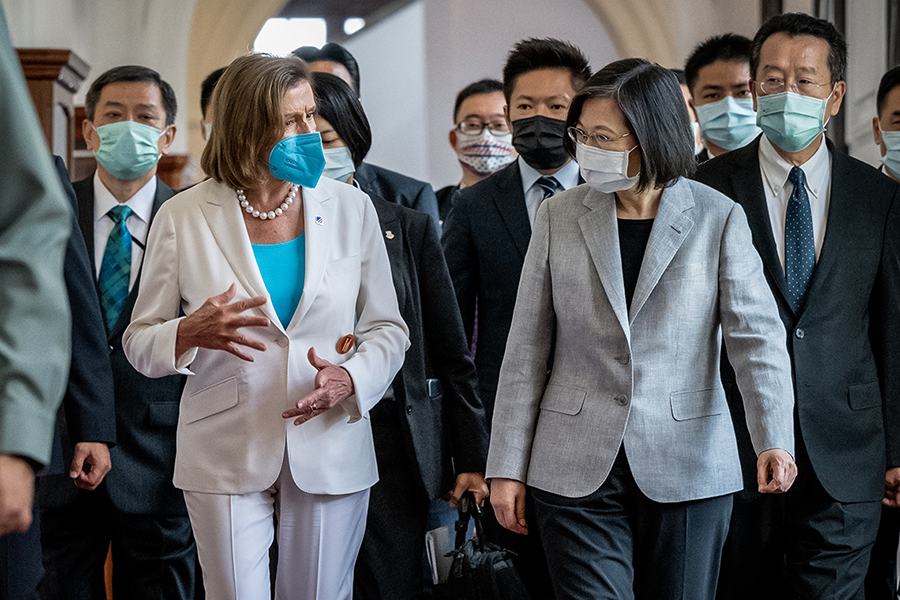 “Those who play with fire will perish by it,” Xi told U.S. President Joe Biden during a July 28 virtual conversation focused on the Taiwan situation. Whether unaware of or unconcerned by the constitutional division of powers between the executive and legislative branches of the U.S. government, Chinese leaders interpreted Pelosi’s visit as an expression of official U.S. support for increased Taiwanese autonomy and responded with a dramatic show of force.

For five days beginning on Aug. 3, the Chinese People’s Liberation Army Navy (PLAN) and Air Force (PLAAF) conducted a complex set of combined maneuvers in the airspace and waters surrounding Taiwan, while PLA Rocket Forces launched multiple ballistic missiles. On Aug. 7, for example, the Taiwanese Ministry of National Defense reported that 14 PLAN warships and 66 PLAAF combat planes engaged in military maneuvers along the median line between China and Taiwan, with some of the aircraft crossing into the eastern, Taiwan-facing side. The following day, the ministry reported that 13 Chinese ships and 39 planes conducted similar maneuvers, with some aircraft again crossing the median line. Meanwhile, Taiwan deployed its own ships and planes in the area to drive off the Chinese intruders, setting the stage for what could have become accidental or unintended clashes between the two sides.

The missile strikes on Aug. 3 entailed the launch of 11 Dongfeng-15 (DF-15) short-range ballistic missiles into waters east, northeast, and southeast of Taiwan. Five of the missiles reportedly landed in the waters of Japan’s declared exclusive economic zone. The DF-15 is a road-mobile, solid-fueled ballistic missile with a maximum range of 900 kilometers and a payload of up to 750 kilograms. Although primarily intended for conventional strikes against high-value enemy assets, such as air bases and command centers, some variants are believed to be capable of carrying nuclear warheads. Many Western observers of the Aug. 3 firings believe that China’s intent was to demonstrate a capacity to endanger shipping around Taiwan should it decide to blockade the island and destroy any enemy ships sent to Taiwan’s aid if it chooses to invade.

The elaborate air and sea maneuvers appear to have had two major objectives: first, to make evident to Taiwanese leaders that China possesses the will and capacity to invade the island if Taiwan moves toward full independence and, second, to provide the PLA and its constituent forces with an opportunity to test their capacity to undertake such a complex and perilous mission.

As a political statement, the Chinese maneuvers appear to have had little impact on the outlook of Taiwan’s leaders. In a televised address on Aug. 4, Taiwanese President Tsai Ing-wen condemned China's aggressive behavior and vowed to "resolutely defend our nation's sovereignty and security as a bulwark of democracy and freedom."

This presents a quandary for Chinese leaders. If a major show of force on this scale fails to make a significant impact on Taiwanese thinking, does Beijing abandon such harsh measures and rely instead on increased trade and tourism, to win the Taiwanese people over; or do they increase the scale and intensity of military operations, prompting a correspondingly larger Taiwanese response and increasing the risk of a violent clash?

The talk from Beijing suggests an inclination to pursue the latter course. On Aug. 7, Chinese state television reported that the PLA will henceforth conduct "regular" military drills on the eastern side of the median line in the Taiwan Strait. Since then, there have been numerous such episodes.

That could make the second goal of the maneuvers even more important. Although the PLA conducts military drills on a regular basis, it rarely conducts combined air-sea-missile exercises on this scale and never in such highly contested waters. From what can be gleaned of the maneuvers, PLA forces sought to engage in combined air-sea operations of a sort that would be required in an actual blockade or invasion of Taiwan.

As would also be expected in such a complex operation, PLA forces employed anti-submarine warfare assets, long-range surveillance drones, and cybercapabilities. Although it is impossible to determine what combat scenarios the PLA leadership envisioned, the PLAAF did deploy several H-6 heavy bombers. That plane originally was designed to deliver nuclear or conventional weapons. The most recent version, the H-6K, is usually equipped with conventionally-armed cruise missiles but a new variant is believed to be intended for nuclear missions.