Ukraine’s largest nuclear power plant came under attack multiple times in August, highlighting the risks posed by Russia’s occupation and militarization of the facility and leading to renewed calls for a demilitarized zone around the site. 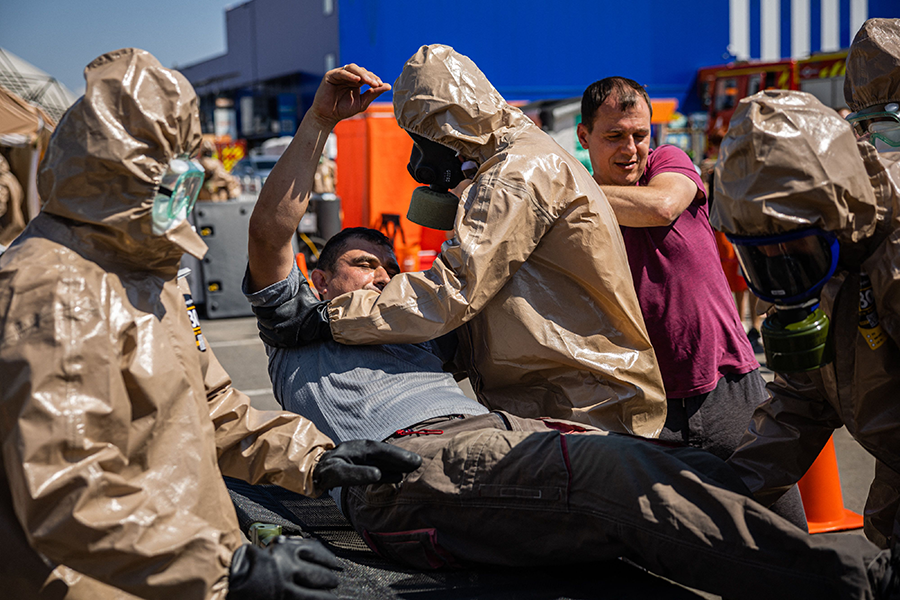 Russia took over Zaporizhzhia nuclear power plant in early March in violation of international law and has refused to withdraw from the site, despite pressure to do so from world leaders. (See ACT, June 2022.) Since then, it has used the operating nuclear facility for stationing troops and munitions.

Fighting intensified around the plant in August. It included an Aug. 5 attack that caused a temporary power shutdown and an Aug. 6 rocket attack that Ukraine's nuclear operator Energoatom said deliberately targeted the structure used to store spent fuel. Some 174 casks of spent fuel are stored at Zaporizhzhia. Russia denied the attacks and blamed Ukraine instead.

On Aug. 25, Zaporizhzhia was temporarily disconnected from the electricity grid after fires caused by shelling damaged the power plant's lines.

The Aug. 6 incident prompted UN Secretary-General António Guterres to call for an end to the “suicidal” attacks on the plant. He renewed his appeal for Ukraine and Russia to cease fighting around the facility on Aug. 11 and to establish “a safe perimeter of demilitarization to ensure the safety of the area” after further strikes caused additional damage. Guterres also called for International Atomic Energy Agency (IAEA) personnel to visit the site, which Moscow and Kyiv say they support.

The IAEA has sought access to Zaporizhzhia in the past, and Russia agreed to allow an IAEA team into the facility in June, but security concerns ultimately prevented the visit.

IAEA Director-General Rafael Mariano Grossi told the UN Security Council during an Aug. 11 meeting about the situation at Zaporizhzhia that based on the most recent assessments, the rocket attacks caused “no immediate threat to nuclear safety” but that assessment “could change at any moment.” He said both sides must “cooperate with the IAEA and allow for a mission” to Zaporizhzhia as soon as possible. As the situation grew more dire, Grossi and his 14-member team entered Ukraine on Aug. 29 for a brief site visit.

Grossi said he is in touch with Russia and Ukraine regarding operations at the plant, but the information provided is often contradictory. He also raised concerns about the Ukrainian staff that continue to operate the reactor under significant stress. An IAEA presence can evaluate the working conditions of the staff and would be “beneficial to the operations and regulators” of the plant, he said.

Sergiy Kyslytsya, the Ukrainian ambassador to the United Nations, told the Security Council that Ukraine has negotiated modalities for access with the IAEA. He blamed Russia for demanding “unjustified conditions” for the IAEA visit. He also accused Russia of planning to cut Zaporizhzhia off from supplying electricity to Ukraine and urged the international community to press Russia to withdraw from the facility and remove its military personnel and weaponry.

Vassily Nebenzia, the Russian ambassador to the UN, said that Moscow is abiding by IAEA guidelines and blamed Ukraine for creating a security situation at Zaporizhzhia that is unconducive for an agency visit.

During the Security Council meeting, Bonnie Jenkins, U.S. undersecretary of state for arms control and international security, called for Russia to end its “illegal presence” at the facility and return full control of Zaporizhzhia to Ukraine. She said, “Russia alone created risks,” and it “can eliminate those risks now by withdrawing from Ukraine.”

The United States joined more than 40 countries and the European Union in an Aug. 12 statement saying that the Russian military presence at Zaporizhzhia is “unacceptable and disregards the safety, security, and safeguards principles that all members of the IAEA have committed to respect.” The statement urged Russia to withdraw immediately from the facility and surrounding areas so that “legitimate operating staff can conduct their duties without outside interference, threat, or unacceptably harsh working conditions.”

The Security Council meeting about Zaporizhzhia took place while states were gathered at the UN to review the nuclear Nonproliferation Treaty (NPT). Jenkins said in her Aug. 11 statement that it was “especially galling” that Russia’s actions are taking place during the NPT review conference.

Russia’s actions “could not more directly undercut” the interests that NPT member states have in “strengthening nonproliferation, disarmament, and peaceful uses of nuclear energy,” Jenkins added.

In an Aug. 9 statement, the Ukrainian delegation to the NPT review conference called for the international community to “close the sky over the nuclear power plants of Ukraine and to provide air defense systems” to protect the country’s nuclear power plants.

Other states raised concerns about attacks on Zaporizhzhia causing a nuclear disaster and called for strengthening norms against attacking peaceful nuclear facilities during conflict. The NPT does not prohibit attacks against nuclear sites, but Protocol I of the 1949 Geneva Conventions does prohibit the targeting of “installations containing dangerous forces,” including “nuclear electrical generating stations…if such attack may cause the release of dangerous forces and consequent severe losses among the civilian population.”