Claims by President Joe Biden and administration officials that human rights are at the heart of U.S. foreign policy are drawing scrutiny as Washington continues arms sales and other security assistance to certain countries in the Middle East. 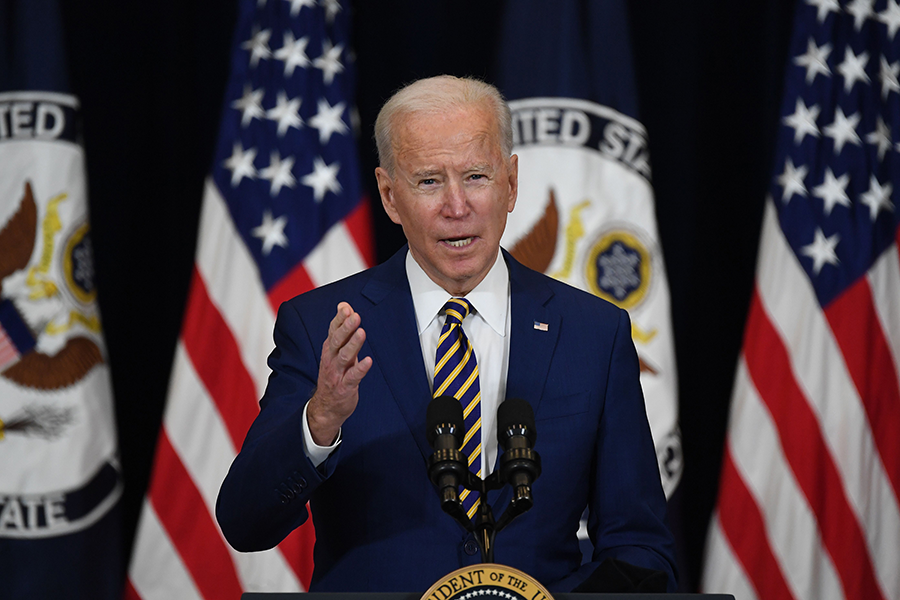 In his national address in August marking the end of the U.S. war in Afghanistan, Biden said, “I’ve been clear that human rights will be the center of our foreign policy.” In September, when the administration withheld $130 million in security assistance to Egypt, State Department spokesman Ned Price stated that the United States would release the funds “only if the government of Egypt affirmatively addresses specific human rights related conditions.”

But that decision quickly drew criticism. Nineteen human rights organizations issued a letter on Sept. 14 calling it a “betrayal” of Biden's commitment to human rights that “sidesteps the intent of Congress.” Instead, they argued, the administration should have withheld the full $300 million “to incentivize [President Abdel Fattah] al-Sisi to change course.”

In 2019, Congress made $300 million of the $1.3 billion in annual foreign military financing to Cairo conditional on the secretary of state’s certification that Egypt was taking steps such as investigating and prosecuting extrajudicial killings, and releasing political prisoners.

The decision to send $170 million of that $300 million in security aid was not accompanied by such a certification. Instead, the administration argued that the entire $300 million fell into a funding category of border security, nonproliferation, and counterterrorism programs to which the law did not apply. The Senate Appropriations Committee has removed the provision that allowed for that interpretation in its recently introduced annual bill.

In September, the State Department also notified Congress of a potential $500 million foreign military sale to Saudi Arabia to maintain various Saudi helicopters, including AH-64 Apache attack helicopters. Some experts said this was at odds with Biden’s promise to end "all American support for offensive operations in the war in Yemen, including relevant arms sales." As an example, National Security Advisor Jake Sullivan told a news conference on Feb. 4 that the policy applied to precision-guided munitions approved by the Trump administration. On Oct. 27, a State Department spokesperson told Arms Control Today in an email that the helicopter maintenance was consistent with the administration’s human rights approach. The spokesperson said it “helps Saudi Arabia maintain self-defense capabilities…particularly on their border,” and that the administration had found “the overwhelming majority of [civilian harm] incidents were caused
by air to ground munitions from fixed wing aircraft.”

The administration has been criticized, however, for supporting Saudi Arabia through preexisting supply and maintenance contracts. In September, the House approved an amendment, sponsored by Rep. Ro Khanna (D-Calif.), to the National Defense Authorization Act that would prohibit maintenance support for warplanes used in Yemen against the Houthis. “It’s time to do what is morally right, hold Saudi Arabia accountable, and fully end U.S. complicity in the Saudi-led coalition’s bombing of Yemeni civilians,” Khanna said.

On Oct. 13, Secretary of State Antony Blinken met the foreign ministers of Israel and the United Arab Emirates, two U.S. weapons recipients that have been criticized for their human rights records, and spoke positively of the 2020 Abraham Accords, which helped normalize relations between them. At their joint press conference, Blinken made no mention of whether the administration might rethink the controversial arms sales to the UAE that have been linked to the accords, including F-35s worth $10 billion. The administration has said it wants to complete the F-35 deal, but in a way that respects human rights. (See ACT, May 2021.) The UAE has been criticized for misusing weapons in Yemen and its own human rights record.

Although Biden sometimes has spoken candidly about Washington’s Arab allies, his rhetoric on Israel has been less critical. Efforts to curtail or criticize U.S. material support for Israel over human rights issues have come instead from Congress.

In May, as hostilities escalated in Gaza, members of Congress introduced resolutions of disapproval to block a direct commercial sale of precision-guided munitions to Israel worth $735 million. (See ACT, June 2021.) Ultimately, no votes were taken, and the administration moved the sale forward. In July, the State Department notified Congress of another Israeli-related sale totaling $3.4 billion for 18 cargo helicopters and related equipment.

On Sept. 21, House Democrats, responding to progressive members, removed a provision from a funding bill that would have provided $1 billion for Israel's Iron Dome air defense system. Democrats on the House Appropriations Committee then introduced a separate bill to fund the system, which passed the House on a 420–9 vote on Sept. 23. The bill hit a roadblock in the Senate on Oct. 4, when Sen. Rand Paul (R-Ky.) objected to a call by Sen. Bob Menendez (D-N.J.) for unanimous consent to proceed. The funding is expected to be approved, and Paul supports the system, but he wanted the money to come from a different account.

Although there are precedents for Congress expressing concern about arms sales to Israel and other Middle Eastern countries, there is growing scrutiny over the relationship between weapons transfers and human rights. An expected revised conventional arms transfer policy could make more explicit how the administration weighs human rights in arms sales decisions. (See ACT, October 2021.)