“It will take all of us working together – government officials, and diplomats, academic experts, and scientists, activists, and organizers – to come up with new and innovative approaches to strengthen transparency and predictability, reduce risk, and forge the next generation of arms control agreements.”
– Wendy Sherman
U.S. Deputy Secretary of State
June 2, 2022
China Tested Hypersonic Capability, U.S. Says

China has tested a nuclear-capable hypersonic glide vehicle, carried on a rocket, that flew through low-orbit space and circled the globe before striking within two dozen miles of its target, U.S. intelligence sources told the Financial Times. 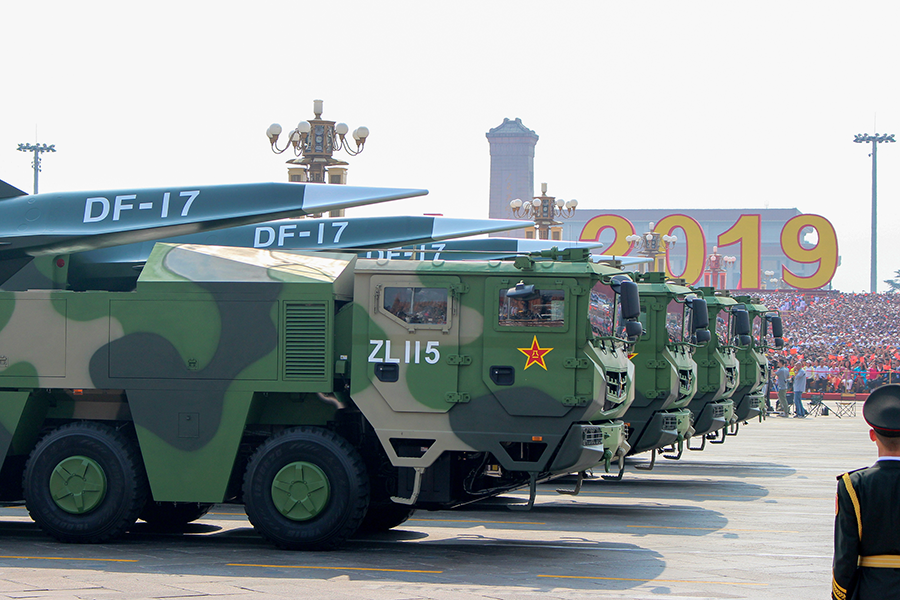 Defense Secretary Lloyd Austin declined to comment on the Oct. 16 report about the July 27 test. “What I can tell you is that we watch closely China’s development of armaments and advanced capabilities and systems that will only increase tensions in the region,” he told reporters on Oct. 18. “China is a challenge, and we’re going to remain focused on that.”

“We have reached out” to China, he told reporters. “We have made very clear our interest in engaging with [Beijing], as responsible countries would and do, in the context of these powerful weapons and weapons systems.”

Russia, meanwhile, dismissed any concern over the report. “We have allied and partner relationships with China,” said Kremlin spokesperson Dmitry Peskov on Oct. 19. “China is developing its armed forces and weapon systems without going beyond the scope of any international commitments.”

The Chinese Foreign Ministry dismissed the claim it tested a new weapon. “This was a routine test of space vehicle to verify technology of spacecraft’s reusability,” said spokesperson Zhao Lijian on Oct. 18.

U.S. Air Force Secretary Frank Kendall in September seemed to hint at China’s development of a system like the one reported by the Financial Times. He said Beijing is developing capabilities that may allow for “the potential for global strikes, strikes from space.” Kendall specifically referenced the concept of the Fractional Orbital Bombardment System (FOBS), which was developed by the Soviet Union in the 1960s and was operationally deployed in the 1970s to bring a missile into Earth’s low orbit. Such a trajectory would allow the missile system to come from the south via Antarctica and evade the Arctic, where U.S. early-warning radar detection is concentrated.

But following news of the July test, Kendall attempted to clarify his remarks. “People have been interpreting my remarks as telegraphing something…[but] the point I was trying to make, I think, was there are a lot of things that are in the realms of feasibility, and…we need to worry about that,” he said on Oct. 18.

Michael Griffin, former undersecretary of defense for research and engineering, described the test as “a really big deal.”

Some experts suggest that the impetus for Beijing’s possible development of this system can be tied partly to its concerns about U.S. missile defenses. “This is almost certainly, on a technical and strategic level at least, motivated by concerns about a potential breakthrough in U.S. missile defense capabilities,” tweeted Ankit Panda, the Stanton Senior Fellow at the Carnegie Endowment for International Peace, on Oct. 18.

The Financial Times, citing two sources, reported on Oct. 20 that Beijing conducted a second test of a hypersonic system on Aug. 13, but there were no additional details.

The alleged tests come after recent revelations that China has constructed at least 250 new missile silos at as many as three locations across China, which fueled concerns of a rapid nuclear build-up in the third-largest nuclear-weapon state. (See ACT, September 2021.)

“It almost seems like we can’t go through a month without some new revelation coming about China,” said Adm. Charles Richard, commander of U.S. Strategic Command, on Oct. 18. “I am not surprised at reports like this. I won’t be surprised when another report comes next month.”