– Larry Weiler
Former U.S.-Russian arms control negotiator
August 7, 2018
Banning the Bomb: Smashing the Patriarchy and The Treaty Prohibiting Nuclear Weapons: How It Was Achieved and Why It Matters 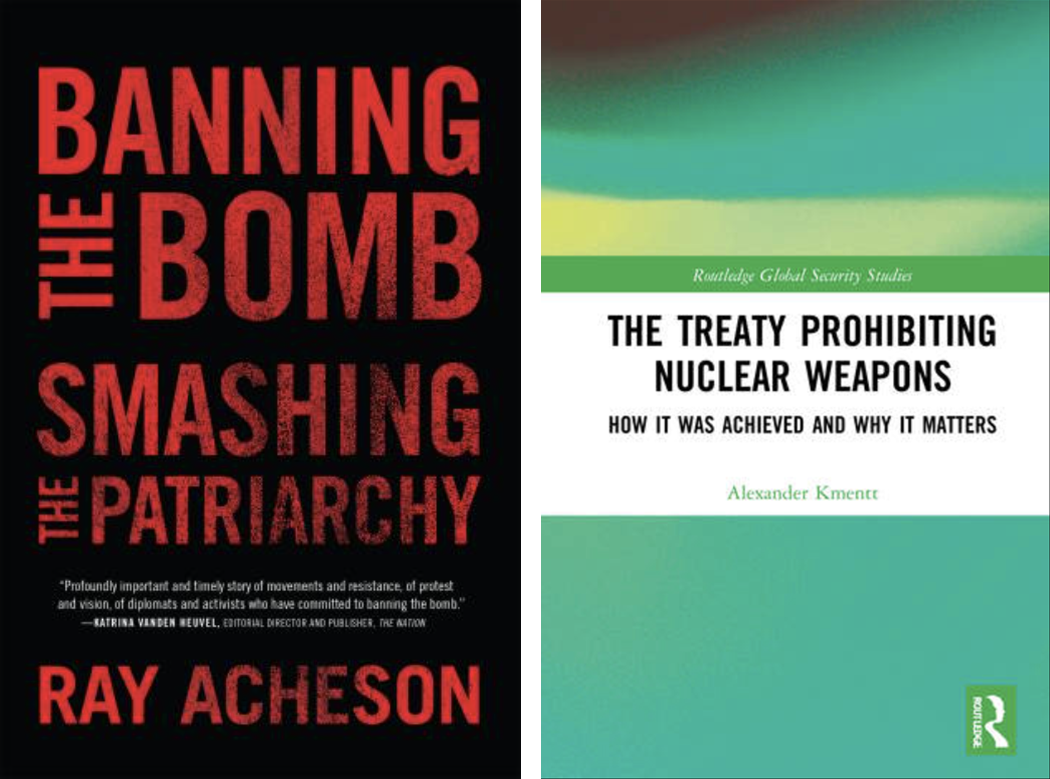 The Treaty Prohibiting Nuclear Weapons: How It Was Achieved and Why It Matters
By Alexander Kmentt
(Routledge, 2021)
272 Pages

As a former denizen of Washington working in the nuclear weapons space, I know how it can seem as though the only important conversations about nuclear weapons are happening in the U.S. capital, or Omaha, or Brussels, or in capitals of the other nuclear-armed states. Yet, two recent books on the Treaty on the Prohibition of Nuclear Weapons (TPNW), often called the nuclear ban treaty, demonstrate that activists around the world and diplomats from non-nuclear-weapon states have also been engaging in serious discussions about the future of these weapons. Both books make clear why so many diplomats and activists came together in 2017 to negotiate a treaty banning nuclear weapons despite significant criticism from nuclear-armed states and their allies. Understanding their arguments matters for the future of nuclear deterrence and U.S. alliance relationships, the nuclear Nonproliferation Treaty (NPT), and global governance of nuclear weapons more broadly.

In Ray Acheson’s Banning the Bomb: Smashing the Patriarchy and Alexander Kmentt’s The Treaty Prohibiting Nuclear Weapons: How It Was Achieved and Why It Matters, readers are offered two recent histories of the movement to change the discourse surrounding nuclear weapons and bring about the TPNW. The books offer unique but complementary views from two actors involved in the process. As the director of Reaching Critical Will and a member of the International Campaign to Abolish Nuclear Weapons (ICAN) steering committee, Acheson offers the insights of a nongovernmental organization (NGO) participant. Kmentt, a career diplomat who is the director of disarmament, arms control, and nonproliferation in the Austrian Ministry of Foreign Affairs, provides the perspective of someone operating within the core group of states leading the effort. The books are rich, behind-the-scenes accounts that reveal key details of the process of trying to ban nuclear weapons. Both would be enjoyable for general audiences interested in nuclear issues. More importantly, they should be read by those in the nuclear policy space, whether they support the ban treaty or not, because the arguments behind the movement have become part of the global conversation on the future of nuclear weapons and they are not going away.

Each book provides an account of the development of the humanitarian initiative, an effort to bring humanitarian considerations into global discourse about nuclear weapons, and the TPNW. The recent origin of these efforts lies in concern over the future of the 1968 NPT. In addition to prohibiting all but five countries from having nuclear weapons, NPT Article VI calls for all treaty members to pursue effective measures toward complete disarmament. Many non-nuclear-weapon states that signed the treaty never expected the five treaty members possessing nuclear weapons (China, France, Russia, the United Kingdom, and the United States) to
retain them permanently.

Both authors point to deep dissatisfaction and impatience over the perceived lack of progress on nuclear disarmament after several disappointments in the past two decades. Kmentt highlights the 13 “practical steps” to which all NPT members agreed at the 2000 NPT Review Conference. Included in these steps were promises related to further disarmament progress, but consensus on these steps did not survive U.S. President George W. Bush’s administration.

Furthermore, the Conference on Disarmament (CD), the UN body for arms control and disarmament negotiations, has remained paralyzed since 1996, unable to make progress on any new agreements. Kmentt writes, “By 2008, the state of health of multilateralism in the field of nuclear disarmament, arms control and non-proliferation was bleak.” In this period, some diplomats with experience working on the anti-personnel landmine and cluster munitions ban treaties began to consider ways to bring the humanitarian framing that had been so important to the development of those conventions into the nuclear weapons arena.

Once again, the lack of follow-through on the promises made in that 2010 NPT action plan disappointed those seeking greater progress on nuclear disarmament. That perceived failure, when added to Obama’s multibillion-dollar nuclear modernization plan, resulted in several diplomats and activists deciding to chart a new path outside of the NPT context. As Kmentt recalls, “The loss of impetus to Obama’s vision of a world without nuclear weapons helped galvanize the disarmament-minded states and civil society towards a different type of process and a goal they could achieve without, if necessary, the involvement of the nuclear-armed states.”

Norway played a significant role in pushing this initiative forward by providing funding to anti-nuclear civil society groups in the early 2010s, in what Kmentt calls the “operational launch” of the humanitarian initiative. These organizations would focus on reframing the discourse around nuclear weapons to emphasize the devastating humanitarian effects of these weapons’ use. In April 2012, Norwegian Foreign Minister Jonas Gahr Støre, now the prime minister, announced that his government would host a conference on the humanitarian impacts of nuclear weapons in March 2013.

Delegations from 127 states attended the conference in Oslo. It was followed by similar conferences in Nayarit, Mexico, and Vienna in 2014, with more states attending each time. These conferences presented diplomats from all over the world, especially those from the younger generations, with a better understanding of the effects of nuclear weapons use on human bodies, communities, and the environment. The three conferences ultimately created momentum for an open-ended working group on disarmament in 2016 and treaty negotiations in 2017, both sponsored by the United Nations.

The treaty, adopted in July 2017, bans all activities related to nuclear weapons including manufacturing, testing, transferring, stationing, using, and receiving nuclear weapons and assisting in their creation or threatening their use. No one negotiating the treaty anticipated it would quickly eliminate nuclear weapons; the aim is to create a strong normative opposition to these armaments as part of a long-term plan for their abolition. Acheson explains, “The renewed focus on the humanitarian and environmental impacts of nuclear weapons constituted a deliberate effort to devalue, delegitimize, and stigmatize nuclear weapons.” With 50 ratifications, the TPNW entered into force in January 2021; the first meeting of states-parties is scheduled for March 2022 in Vienna.

The two books differ in their framing of the history. Acheson in chapter 1 provides several different theoretical lenses, or “ideologies,” through which to view nuclear weapons and nuclear governance, including political economy, the social meaning of nuclear bombs, patriarchy, colonialism, and racism. In subsequent chapters, Acheson refers back to these perspectives to explain and evaluate the process of banning nuclear weapons and to illustrate why the effort is embraced by some and resisted by others. Kmentt does not employ theory to the same extent, but repeatedly returns to the concept of human security, a people-centric form of security in which individual needs are met and communities remain secure. The chapter in which Kmentt provides detailed refutations of common criticisms of the TPNW should not be missed.

Of the several themes throughout both books, three in particular stand out as being of interest to the broader nuclear community. Both argue for broadening the participation and content of nuclear discourse. Traditionally, policy discussions are limited to experts within the nuclear-weapon states with strong emphasis on nuclear deterrence, extended nuclear deterrence, strategic stability, escalation, and credibility. Underlying the humanitarian initiative is the argument that all states and all people should have a say in what happens with the world’s nuclear weapons because all states could be affected by nuclear blasts. Not only would a nuclear weapon detonated in a populated area have devastating humanitarian consequences for the population immediately affected (“To tissue. To hearts. To brains. To limbs. Skin. Eyeballs,” Acheson writes), but other nearby states could be overwhelmed by spreading radiation, terrified people fleeing across borders, and serious damage to agriculture, infrastructure, and economic systems. If several bombs were detonated, the destruction would multiply.

Because the effects of nuclear explosions do not respect sovereign borders, hypothetically all states could face horrifying ramifications from their use, and thus all states should have the right to have a say in the world’s nuclear future. Talking about nuclear weapons in terms of the humanitarian consequences expands the traditional discourse about these armaments and clarifies the reality of what they can do. Those in favor of possessing nuclear weapons argue that these effects are exactly why nuclear deterrence works, but many of those who understand the devastating consequences of these weapons’ use find it difficult to imagine that their potential use is credible. 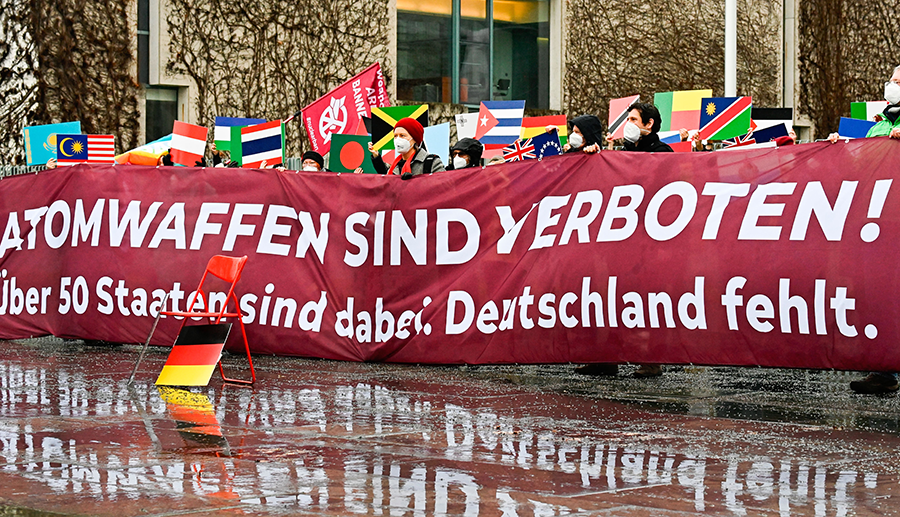 A final theme of the two books is the increased role of NGOs and intergovernmental organizations in global nuclear governance over the past decade. Although this is not a new concept in global politics, the level of participation was unique in the nuclear sphere. ICAN served as the umbrella organization for many anti-nuclear groups around the world and participated in the humanitarian conferences, open-ended working groups in 2013 and 2016, and the treaty negotiations. The International Committee of the Red Cross also played an important role in applying international humanitarian law to the discussions of nuclear use and in the negotiations.

Acheson and Kmentt highlight the symbiotic relationship between states and nonstate actors. For example, Norway provided funding for NGOs that would bring intellectual capital, organizational capabilities, and previous experience on humanitarian treaties to bear in aiding states and pushing them toward the ban treaty. ICAN lobbied states to participate in these conferences and working groups and held regional meetings to bring states on board that do not usually pay much attention to nuclear policy.

Although government officials and nonstate actors cooperated to bring about TPNW negotiations, in the end it was states that had the final say in the treaty text. ICAN was disappointed that some of its recommendations were not included in the final document. Nonetheless, the umbrella group was a significant political force in bringing about the ban treaty negotiations and was awarded the Nobel Peace Prize for this effort in 2017.

After all this, what does the TPNW mean for the NPT and global governance? The fact that the TPNW came to fruition is an indictment of the NPT’s inability to foster progress on disarmament. In other words, states pursued the ban treaty in part because the NPT forum lost legitimacy after the nuclear-weapon states reneged on several disarmament commitments and pursued modernization programs to maintain and expand their arsenals for decades to come.

Maintaining the NPT and the strong nonproliferation norm it enshrines is undoubtedly in the interest of the United States and the rest of the international community. A key question for the NPT nuclear-weapon states is whether the treaty can survive in perpetuity with this loss of legitimacy. Can it continue for another 50 years when the most lethal armaments remain in the exclusive control of a select few powerful states while so many others clamor for disarmament?

Rebecca Davis Gibbons is an assistant professor of political science at the University of Southern Maine. She previously served as a fellow and associate of the Project on Managing the Atom at Harvard Kennedy School’s Belfer Center for Science and International Affairs. Her book The Hegemon’s Tool Kit: US Leadership and the Politics of the Nuclear Nonproliferation Regime will be published in spring 2022.