“Your association has taken a significant role in fostering public awareness of nuclear disarmament and has led to its advancement.”
– Kazi Matsui
Mayor of Hiroshima
June 2, 2022
Iran Avoids IAEA Censure

Iran avoided a censure from the International Atomic Energy Agency (IAEA) Board of Governors by striking a last-minute deal with the agency that allowed inspectors to access monitoring equipment at several nuclear facilities. 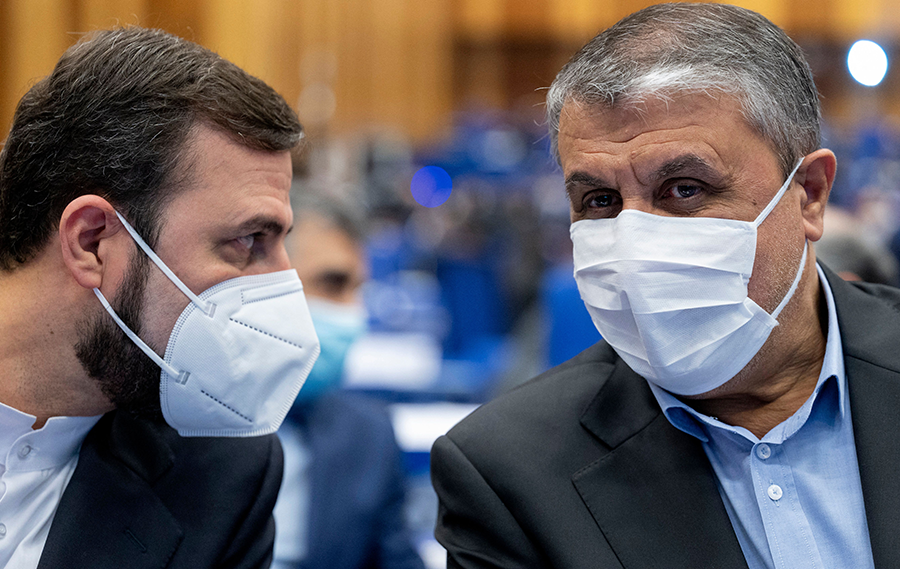 But as of late September, Iran had only partially implemented the deal and had blocked inspectors from replacing damaged cameras at a location the IAEA says is covered by the agreement.

IAEA Director-General Rafael Mariano Grossi and Mohammad Eslami, head of the Atomic Energy Organization of Iran (AEOI), announced the access agreement in a Sept. 12 joint statement. The IAEA later confirmed that, under the terms of the deal, Iran allowed inspectors to visit the facilities Sept. 20–22 to replace the data storage units and ensure the surveillance machines are functioning properly. The agency will only be allowed to access the data collected by the monitoring equipment if the 2015 nuclear deal between Iran and six world powers is restored. Iran limited the IAEA’s access to information and sites in February, as part of a series of actions designed to push the United States to return to the nuclear deal and lift sanctions on Iran. (See ACT, March 2021.)

Grossi said in a Sept. 12 press conference that the access agreement was “indispensable” for the IAEA’s ability to provide the “necessary guarantee…that everything is in order.” He stressed that the arrangement is intended to “allow time for diplomacy” and is not a “permanent solution.”

Grossi traveled to Tehran to negotiate the access after noting in a Sept. 7 report that Iran’s refusal to allow inspectors to access and service the equipment was “seriously compromising” the agency’s technical capabilities to “maintain continuity of knowledge” about Iran’s nuclear program. If the IAEA cannot do that, it could inhibit the agency’s ability to resume the monitoring and verification activities required by the 2015 nuclear deal, known as the Joint Comprehensive Plan of Action (JCPOA), according to the report.

The Sept. 12 arrangement also allows inspectors to replace cameras at a centrifuge production facility that Iran claims were damaged during an attack on the site in June. But Iran blocked inspectors from accessing the facility on Sept. 26 to install the new surveillance equipment, according to an IAEA report issued that same day.

Iran removed the cameras shortly after the attack and did not allow inspectors to access the machines until Sept. 4. According to the Sept. 7 report, IAEA inspectors noted that the data storage unit from one of the destroyed cameras was not among the debris and requested Iran find the unit. The IAEA will not know if the data collected from the other damaged cameras are recoverable until the nuclear deal is restored.

The Sept. 26 report said Iran’s refusal to allow inspectors to access the site is “contrary to the agreed terms” of the Sept. 12 arrangement. The report notes the importance of installing the machines before Iran resumes production of centrifuge equipment.

Iran has denied it is violating the terms of the Sept. 12 deal with the agency. Kazem Gharibabadi, Iran’s ambassador to the IAEA, said on Sept. 26 that the centrifuge production facility is “still under security and judicial investigation” and that the equipment at that site was not included in the Sept. 12 arrangement.

France, Germany, and the United Kingdom said in a Sept. 27 statement that they were “profoundly concerned that Iran has not fully implemented” the Sept. 12 agreement and warned that if Iran does not cooperate with the IAEA, the agency will “lose the ability to re-establish continuity of knowledge” about Iran’s nuclear program. The three countries are considering “appropriate action” in response, the statement said.

If Iran and the IAEA had failed to reach an agreement on inspector access, the IAEA board appeared poised to pass a resolution censuring Iran during its Sept. 13–17 meeting in Vienna. A European official told Arms Control Today in a Sept. 16 email that, “absent the agreement, a resolution censuring Iran for failing to cooperate with the IAEA was a near certainty.” The resolution would have had enough support from the 35 members of the IAEA board to pass, even with Russia and China opposing it, the official said.

A resolution censuring Iran would have little practical impact in the near term, but it would lay the groundwork for the IAEA board to refer Iran to the UN Security Council. The IAEA board took that step in 2006 after passing several resolutions urging Iran to comply with the agency’s investigation into the country’s undeclared nuclear activities. The Security Council then sanctioned Iran for failing to cooperate with the IAEA.

But a censure could have hindered efforts to restart negotiations to restore the 2015 nuclear deal. Iranian President Ebraham Raisi warned on Sept. 8 that an “unconstructive” action by the IAEA board would “disrupt the negotiations” in Vienna. Those talks have been stalled since Raisi’s election in June, but he has pledged to return to the negotiating process.

The initial decision to pursue the resolution “did not come easily” for France, Germany, and the UK, the three countries that were pushing for a resolution prior to the Sept. 12 agreement, the official said. The countries were concerned about negatively impacting the Vienna process, but agreed that a censure was necessary to support the agency and send a message to Iran that “its continued failure to cooperate with IAEA requests would not be tolerated.” The states also recognized that restoring the nuclear deal and sustaining it would require the IAEA to reconstitute a record of Iran’s nuclear activities from the time period that inspector access was limited, the official said.

The United States shares that concern. Louis Bono, U.S. charge d’affaires to the UN missions in Vienna, said in a Sept. 15 statement to the IAEA board that it is “very important that Iran uphold the understandings reflected” in the Sept. 12 joint statement. He said the United States remains committed to restoring the 2015 nuclear deal but that “will be far more difficult if the IAEA is unable to recover and reestablish” its knowledge of Iran’s nuclear program. The “onus must be on Tehran to do its part,” Bono said.

The IAEA has had limited access to Iranian nuclear sites since February, when Tehran notified the agency it was suspending implementation of the additional protocol to its safeguards agreement, which gives inspectors more access to sites and information in Iran, and certain monitoring provisions specific to the 2015 nuclear deal. Tehran passed a law in December 2020 that mandated certain breaches of the JCPOA, including the monitoring reduction, until Iran received relief from U.S. sanctions that were reimposed when U.S. President Donald Trump withdrew from the nuclear deal in May 2018.

Under a Feb. 21 arrangement reached between Iran and the IAEA before the suspension went into effect, Iran agreed to allow continuous surveillance of certain nuclear facilities to continue. But the IAEA would not have access to the data collected until the 2015 nuclear deal was restored. If an agreement to restore the deal was not reached, Iran said the data would be destroyed.

The initial arrangement between the agency and Iran expired in May. At that time, it was extended for another month. In a June 24 letter to the IAEA board, Grossi raised concerns that Iran had not responded to his requests for information about the status of the special monitoring arrangement. He again noted in the Sept. 7 report that Iran had not responded to IAEA requests to clarify the status of the special arrangement.