China and Pakistan in September encouraged more than 180 countries to adopt a set of guidelines designed to guard against the development and proliferation of biological weapons. 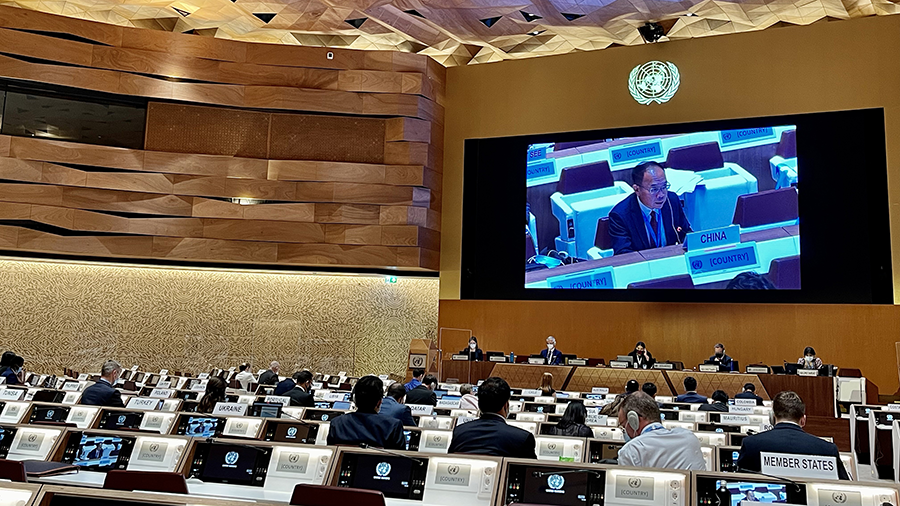 “Broad acceptance of responsible biological research and development of corresponding codes of conduct will bring out the full potentials and benefits of research in this field and help to prevent its misuse or abuse,” said Li Song, China’s permanent representative to the United Nations and disarmament ambassador, in a Sept. 3 statement.

Li officially introduced “The Tianjin Biosecurity Guidelines for Codes of Conduct for Scientists” during a Sept. 2 meeting of experts convened under the 1972 Biological Weapons Convention (BWC). China and Pakistan aim to have “all stakeholders” endorse the guidelines during the BWC’s ninth review conference and commit to “voluntarily incorporat[ing] elements from the guidelines in their practices, protocols, and regulations.” The review conference was initially scheduled to begin in November, but was pushed to 2022 due to the COVID-19 pandemic.

“The Chinese side has submitted the guidelines to the BWC review conference for endorsement,” Chinese Foreign Ministry spokesperson Wang Wenbin said Sept. 6. “The conclusion of the Tianjin Guidelines demonstrates that, in the face of global issues, effective solutions can be found as long as we uphold the spirit of inclusiveness, pragmatism, science, and cooperation.”

Entered into force in 1975, the BWC is a legally binding, multilateral treaty that prohibits the development, stockpiling, acquisition, retention, production, and use of biological and toxin weapons and currently has 183 states-parties.

The Tianjin Guidelines emerged from a consolidated effort that included the Johns Hopkins Center for Health Security, Tianjin University, and the InterAcademy Partnership (a network of 140 national regional, and global science academies, including the National Academy of Sciences) with support from the U.S. State Department and the Chinese Foreign Ministry. The initiative launched in January 2021 and held several meetings during the spring. The partnership formally endorsed the guidelines July 8.

“The ultimate aim is to prevent misuse of bioscience research without hindering beneficial outcomes, in accordance with the articles and norms” of the BWC, according to the introduction to the guidelines.

The State Department said in a Sept. 17 statement to Arms Control Today that it viewed the endorsement of the guidelines by the partnership “as an excellent first step to encouraging scientific institutions from all across the globe to be aware of and to incorporate the elements embodied in the biosecurity guidelines and in the Biological Weapons Convention into their own codes as appropriate.” The department did not comment on China’s official introduction of the guidelines at the BWC meeting.

The 10 guidelines recommend that scientists consider potential biosecurity concerns at all stages of scientific research, strike a balance when disseminating research findings between maximizing benefits and minimizing harm, and actively promote public understanding and interest in biological science and technology, including the potential benefits and risks.

“Scientific institutions, including research, funding, and regulatory bodies, should be aware of the potential for misuse of bioscience research, and ensure that expertise, equipment, and facilities are not used for illegal, harmful, or malicious purposes at any stage of bioscience work,” the guidelines state. “They should establish appropriate mechanisms and processes to monitor, assess, and mitigate potential vulnerabilities and risks in scientific activities and dissemination.”

The move by China and Pakistan to secure an official endorsement of the Tianjin Guidelines by BWC states-parties came one week after the U.S. Office of the Director of National Intelligence released an unclassified summary of the U.S. intelligence community’s assessment of the origin of the COVID-19 pandemic.

“We judge the virus was not developed as a biological weapon,” said the Aug. 27 report. The intelligence agencies remain divided over the most likely origin of the coronavirus, whether by natural exposure to an infected animal or a laboratory-associated incident.

In April, the State Department’s annual arms control compliance report said that Beijing has “engaged in activities that raise concerns with regard to its obligations” under the BWC. “The United States has compliance concerns with respect to Chinese military medical institutions’ toxin research and development because of the dual-use applications and their potential as a biological threat,” the report concluded. Further information, however, remained classified.