Iran and the International Atomic Energy Agency (IAEA) reached a special, temporary agreement for monitoring the country’s nuclear program two days before Tehran suspended more intrusive verification measures required by the 2015 nuclear deal, known as the Joint Comprehensive Plan of Action (JCPOA). The arrangement comes as senior Iranian leaders and the new Biden administration continue to signal their interest in returning to compliance with the JCPOA but have yet to agree on the steps and sequencing for that process. 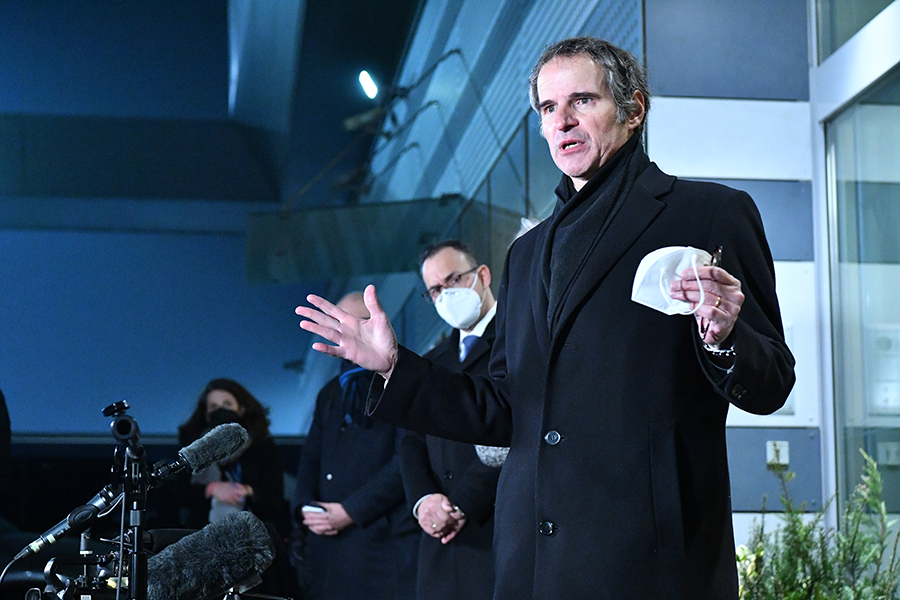 According to a joint statement issued by the IAEA and the Atomic Energy Organization of Iran (AEOI), the two parties reached a “temporary bilateral technical understanding” that will allow the agency to “continue with its necessary verification and monitoring activities” for three months.

The specific activities were detailed in an annex that was not made public, but the AEOI said in a Feb. 21 statement it will continue recording and collecting certain information and will give that data to the IAEA if sanctions relief is granted. The data will be erased if JCPOA sanctions are not fully removed within the three months, according to the statement.

The special arrangement was announced after IAEA Director-General Rafael Mariano Grossi traveled to Tehran on Feb. 21 for talks ahead of Iran’s deadline for halting certain monitoring mechanisms required by the JCPOA.

At a Feb. 21 press conference, Grossi described the technical arrangement as a “reasonable result” that will “stabilize” an unstable situation.

Iran notified the IAEA on Feb. 15 of its intentions to suspend its adherence to an additional protocol to its comprehensive safeguards agreement and other monitoring measures required by the nuclear deal. This was mandated by a December 2020 law designed to pressure the United States to move more quickly to waive JCPOA-related sanctions.

An additional protocol is a voluntary arrangement that gives inspectors greater access to sites and information about a country’s nuclear program. Iran is required to implement it, as well as other verification measures such as continuous surveillance at key sites, as part of the JCPOA.

In a Feb. 18 joint statement, France, Germany, the United Kingdom, and the United States warned Iran against limiting IAEA access and urged Tehran “to consider the consequences of such grave action, particularly at this time of renewed diplomatic opportunity.”

Iran will continue to implement its comprehensive safeguards agreement, which is required by the nuclear Nonproliferation Treaty (NPT), according to the Feb. 21 joint statement. That agreement gives inspectors access to sites where nuclear material is produced and stored.

Grossi confirmed that Iran will suspend implementation of its additional protocol Feb. 23 as required by Iran’s law but that the specific bilateral arrangement will allow the agency to “bridge this period in the best possible way.” He said that inspectors will have less access but the special arrangements will avoid a situation where the agency would “lack information about important activities.”

Iran’s decision to suspend compliance with its additional protocol and other JCPOA-required verification measures is the most recent in a series of steps taken in response to the U.S. withdrawal from the JCPOA in May 2018 and the sanctions reimposed by U.S. President Donald Trump. (See ACT, June 2018.) Iranian officials have repeatedly stated that they will reverse breaches of the deal and return to compliance with the JCPOA if the United States lifts sanctions.

U.S. President Joe Biden has continued to express support for returning the United States to compliance with the JCPOA if Iran does likewise.

Despite both leaders supporting full implementation of the JCPOA, neither side appears to want to make the first move toward restoring compliance. But the United States and Iran appear interested in the European Union playing a coordinating role.

In a Feb. 1 interview with CNN, Iranian Foreign Minister Javad Zarif said that the EU could “choreograph” the steps necessary to return the United States and Iran to compliance with the accord.

The U.S. State Department said on Feb. 18 that the United States “would accept an invitation” from the EU high representative to attend a meeting with the JCPOA’s participants “to discuss a diplomatic way forward on Iran’s nuclear program.”

The EU coordinated that group of states, known as the P5+1 (China, France, Germany, Russia, the UK, and the United States) that negotiated the JCPOA with Iran.

That announcement came after U.S. Secretary of State Antony Blinken met with his French, German, and UK counterparts Sept. 18. A joint statement released by the four ministers said that the United States is “prepared to engage in discussion with Iran” on a mutual return to compliance with the nuclear deal.

Zarif said on Feb. 23 that Iran is “considering an informal meeting” with the other participants in the nuclear deal, noting that the United States is not a member of the P5+1 but would be invited.

The Trump administration tried to use a mechanism in UN Security Council Resolution 2231, which endorsed the nuclear deal and modified UN sanctions on Iran, to snap back those sanctions to prevent the arms embargo on Iran from expiring. The snapback is set up in such a way that it cannot be vetoed. The Security Council rejected the U.S. attempt, stating that the United States withdrew from the deal and the mechanism for reimposing the sanctions was available only to JCPOA parties. (See ACT, October 2020.)

Zarif tweeted the same day that Iran agrees with the United States that the attempt to reimpose UN sanctions “had no legal validity.” He further called for the United States to unconditionally lift all U.S. sanctions put in place by the Trump administration and come into compliance with Resolution 2231.