Not many have successfully modeled what it meant to get into John Lewis’ brand of “good, necessary trouble.” There are perhaps fewer who have given others the courage to do it themselves. Bruce Blair did both. His sudden passing in July leaves behind a remarkable legacy and an enormous void in the anti-nuclear community. 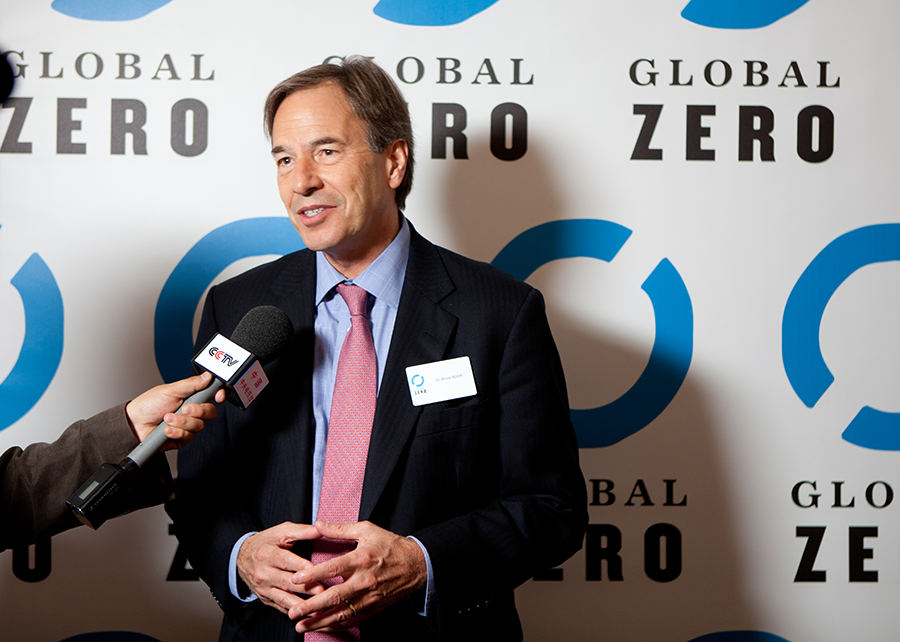 I spent four formative years of my career with Global Zero, the international movement to eliminate nuclear weapons. In my work to rally the public behind our ambitious agenda, which was equal parts exhilarating and challenging, I had the honor and privilege to work with Bruce, Global Zero’s co-founder and inimitable leader.

Other pens have eloquently described the unrivaled contributions Bruce made to the field of nuclear policy and disarmament. From his MacArthur “genius” grant (you would be hard-pressed to find someone more deserving of that title) to his groundbreaking op-eds to his rigorous technical analysis and policy leadership, Bruce did more than perhaps anyone in the last 50 years to bring the enormity of the nuclear threat into urgent focus. As a former nuclear launch officer, Bruce was haunted by our current reality while resolute about the future we needed. His passion lit a fire under activists, policymakers, and international leaders alike to achieve a world free from the nuclear threat.

More impressive than his awe-inspiring resume, however, were the rare dualities of character that made him a most remarkable person. Bruce was a visionary and a pragmatist. He was witty and kind. He was direct and empathic. He was focused and curious. He was unfailingly passionate and exceedingly humble. He was the kind of person who simultaneously made you believe in yourself and made you believe, as he did, that you were capable of much more.

He had a soul-deep knack for getting into the good kind of trouble. He enjoyed describing his time as a launch officer and the unsanctioned activities he and his fellow officers undertook to maintain their alertness during their 36-hour shifts below the ground. Bruce’s days in that Montana silo shaped what became a lifetime of whistle-blowing and the necessary kind of troublemaking that he modeled for so many who knew him. With his characteristic quiet confidence, he spoke truth to power, taking on military brass and “political hacks” as he half-jokingly referred to them, in commentaries and congressional testimonies. Bruce infamously outed the fact that, for years, the codes to the locks in all Minuteman launch control facilities were set to “00000000.” He exposed the fragility of our nuclear launch processes and the asinine logic of our $1 trillion nuclear “modernization.” He consistently ignored those protectors of the status quo who accused him of being too impertinent or unrealistic.

Bruce’s example to take risks with courage and conviction in the face of naysayers emanated throughout the organization he led and the leaders he developed. He gave us the confidence to believe in ideas that were just crazy enough to work. A 50-foot inflatable nuclear weapon on the White House lawn? “Great! Let’s talk turkey,” he told me. When many doubted my team’s recommendation to engage in the 2016 election, using the president’s unilateral authority to use nuclear weapons as a wedge issue, Bruce leaned in with his full support and grit. A few months later, our campaign took center stage in front of 96 million Americans during the presidential debates. Bruce embraced bold thinking and championed those who fought for it.

In subtler ways, too, Bruce showed how to disrupt power structures with his steadfast moral compass. He quietly refused to participate in the navel-gazing that so often characterizes nonprofits and social-change work. Bruce had little patience for egos, credit, and internal politics. He was exceedingly wary of the Beltway echo chamber and had a certain amount of impatience for the self-congratulatory and incremental policy agendas that represented detours from the bold path toward zero. His example rippled. He supported young leaders to find their voices in demanding more from the anti-nuclear space itself: more women and people of color in leadership, more funding for grassroots organizing, and more focus on the bold agendas that get us to zero.

As I have moved on to other jobs in other fields, my appreciation has only grown for Bruce’s big, systems-level thinking. In its vision, pragmatism, and unapologetic rejection of incrementalism and the status quo, Global Zero emanates Bruce. As an organization and a mandate, it paints a future for how the world must be if we are to live up to our collective potential. Yet, it does not relegate that vision to starry-eyed dreams. With rigorous policy analysis, real world expertise, and years of grassroots organizing, it has brought unlikely bedfellows from four-star generals to ardent anti-capitalists together around an agenda that stands to revolutionize our political and economic systems for a more just and safer world.

It is that kind of audacity, pragmatic leadership, and necessary troublemaking that embodies Bruce’s legacy and what the world he left behind needs in spades today. Together we stand at the precipice of our democracy: trust and faith in government is at an all-time low. A global pandemic exposes the deep cracks in our economic system. A racial reckoning reminds us that the institutions we rely on every day were only ever built for some of us. If we are to survive the next 100 years or even the next decade, we need a lot more of what Bruce demonstrated: a bold and unapologetic vision for a safer, more just, more humane world married with his characteristic humility, heart, and grace.

Meredith Horowski is the senior director of the Network at Code for America. Previously, she served for four years as the global campaign director at Global Zero and later founded Beyond the Bomb. She is a board member of Beyond the Bomb and of the Scoville Peace Fellowship.

Ann Lakhdhir’s valiant efforts over almost half a century to advance the causes of disarmament, peace, education, and women’s rights came to an end on May 7, 2020. Denied a position in the U.S. Foreign Service in 1957, probably because she admitted she hoped someday to marry—an automatic disqualification for women in the Foreign Service in those days—she proceeded to devote her life to the service of others. Her career as a citizen activist to advance the public good offers a model for enlightened political action, especially in our current time of great domestic and international instability.

Ann was a former president of the Non-Governmental Organization (NGO) Committee on Disarmament, Peace and Security, which monitors and lobbies the United Nations in these fields. She worked to sustain and promote the committee’s quarterly publication, Disarmament Times, which remains widely read, especially in the UN and NGO disarmament communities.

She organized and moderated countless NGO disarmament forums in New York at the UN, then quietly compiled the transcripts and edited them for publication by the UN Office for Disarmament Affairs and its predecessor, the Department for Disarmament Affairs, which mailed 11 such reports to about 3,000 individuals and organizations worldwide.

She was the UN representative of the Institute for Defense and Disarmament Studies, which she also helped to run with founder Randall Forsberg and the Union of Concerned Scientists.

She was active in encouraging the League of Women Voters (LWV) nationally and locally to address disarmament and arms control issues, ultimately succeeding in getting the LWV to launch a nationwide study of these issues, and was then a member of its Arms Control Task Force. She was proud of her 50-year certificate of her work with the LWV in her hometown of Westport, Connecticut. In 2019, she wrote that she was “again trying to get the national League of Women Voters to ask federal candidates whether the U.S. objective should be to reduce or eliminate nuclear weapons” and to “facilitate verification” of their elimination.She was a tireless advocate of regional nuclear-weapon-free zones, notably in the Middle East, and for peace and security goals in South Asia. She was also a strong supporter of the Iran nuclear deal.

In the 1960s, Ann was instrumental in desegregating two schools in Brooklyn by controversially merging two schools on either side of the Brooklyn-Queens Expressway, where she lived. She then rolled up her sleeves, qualified as a teacher, and taught in those schools; from that early experience, she maintained a lifelong commitment to promoting education at all levels. For more than 15 years, beginning in the 1990s, she and husband Noor worked to found or supply libraries in India, the country of her husband’s birth. In 2014 the American University of Central Asia in Kyrgyzstan named its library after Ann and her husband in gratitude for their support.

Ann had an undergraduate degree from Radcliffe College and two master’s degrees from Columbia University. She also mentored several generations of young students through the NGO Committee’s internship program.

Ann cared passionately for the causes she promoted and was never disenchanted by setbacks, although there were many, especially in disarmament. She preferred to avoid the limelight, and many of her contributions were behind the scenes and without personal attribution or credit. Her life and career fully embodied Gandhi’s sage reflection that “[t]he best way to find yourself is to lose yourself in the service of others.”

In a world of superpowers and superproblems, Ann was a superperson: an indefatigable champion of disarmament, multilateralism, the rule of law, humanitarian principles, women’s rights, and the fundamental norms of the UN Charter. She embodied some of the best qualities that civil society can bring to the advancement of international peace and security and the sustainable development of all. She will be missed by all who knew her and forgotten by none.

Randy Rydell is a member of the Arms Control Association Board of Directors. He served as a senior political affairs officer in the UN Office for Disarmament Affairs from 1998 to 2014.

A Middle Eastern WMD-Free Zone: Are We Any Closer Now?