As tensions between the United States and Russia have intensified, both nations have engaged in airborne “show of force” operations intended to demonstrate their intent to resist intimidation and defend their territories. Such operations can prove hazardous when the aircraft of one antagonist come perilously close to those of another, a phenomenon that has occurred on numerous occasions over the past few years. The recent maneuvers, however, appear to have raised the stakes, as the two rivals have increased their use of nuclear-capable aircraft in such operations and have staged them in militarily sensitive areas. 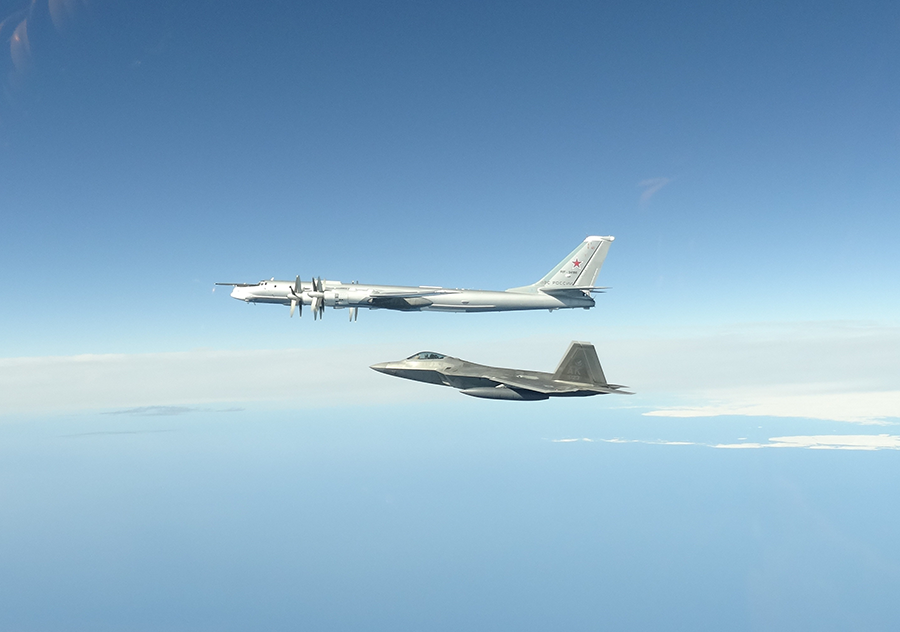 The pace and extent of recent air operations have exceeded anything since the end of the Cold War. The United States has flown a number of missions near Russia, sometimes going places for the first time with strategic bombers. These include (1) two missions in March and June by U.S. B-2 stealth bombers above the Arctic Circle in exercises intended to demonstrate NATO’s ability to attack Russian military forces located on the Kola Peninsula in Russia’s far north; (2) a first-time U.S. B-1B bomber flight on May 21 over the Sea of Okhotsk, a bay-like body of water surrounded by Russia’s far eastern territory on three sides; (3) a May 29 flight by two B-1B bombers across Ukrainian-controlled airspace for the first time, coming close to Russian-controlled airspace over Crimea; (4) a June 15 mission by two U.S. B-52 bombers over the Baltic Sea in support of a NATO exercise then under way, coming close to Russian airspace and prompting menacing flights by Russian interceptors in the area; and (5) a June 18 flight by two U.S. B-52 bombers over the Sea of Okhotsk, a first appearance there by that type of aircraft, again prompting Russia to scramble fighter aircraft to escort the U.S. bombers away from the area.

For its part, Russia conducted a March 12 flight of two nuclear-capable Tu-160 “Blackjack” bombers over Atlantic waters near Scotland, Ireland, and France from their base on the Kola Peninsula in Russia’s far north, prompting France and the United Kingdom to scramble interceptor aircraft. In addition, nuclear-capable Tu-95 “Bear” bombers, accompanied by Su-35 fighter jets, flew twice in June within a few dozen miles of the Alaskan coastline before being escorted away by U.S. fighter aircraft.

In conducting these operations, U.S. and Russian military leaders appear to be delivering two messages to their counterparts. First, despite any perceived reductions in military readiness caused by the coronavirus pandemic, they are fully prepared to conduct all-out combat operations against the other. Second, any such engagements could include a nuclear component at an early stage of the fighting.

“We have the capability and capacity to provide long-range fires anywhere, anytime, and can bring overwhelming firepower, even during the pandemic,” said Gen. Timothy Ray, commander of the U.S. Air Force Global Strike Command, the unit responsible for deploying nuclear bombers on long-range missions of this sort. Without saying as much, Russia has behaved in a similar manner. From his post as commander of U.S. air forces in Europe, Gen. Jeffrey Harrigian observed, “Russia has not scaled back air operations in Europe since the start of the coronavirus pandemic, and the number of intercepts of Russian aircraft [by NATO forces] has remained roughly stable.”

Leaders on both sides have been more reticent when it comes to the nuclear implications of these maneuvers, but there is no doubt that such considerations are on their minds. Ray’s talk of “overwhelming force” and “long-range fires” could be interpreted as involving highly destructive conventional weapons, but when the aircraft involved are primarily intended for delivering nuclear weapons, it can have another meaning altogether.

Equally suggestive is Harrigian’s comment, made in conjunction with the B-52 flights over the Baltic Sea on June 15, that “long-range strategic missions to the Baltic region are a visible demonstration of our capability to extend deterrence globally,” again signaling to Moscow that any NATO-Russian engagement in the Baltic region could escalate swiftly to the nuclear level.

Russian generals have not uttered similar statements, but the dispatch of Tu-95 bombers to within a few dozen miles of Alaska, which houses several major U.S. military installations, is a loud enough message in itself.

Although receiving scant media attention in the U.S. and international press, these maneuvers represent a dangerous escalation of U.S.-Russian military interactions and could set the stage for a dangerous incident involving armed combat between aircraft of the opposing sides. This by itself could precipitate a major crisis and possible escalation. Just as worrisome is the strategic implications of these operations, suggesting a commitment to the early use of nuclear weapons in future major-power engagements.