The International Atomic Energy Agency (IAEA) Board of Governors urged Iran in June to cooperate with the agency’s investigation into possible undeclared nuclear materials and sites in the country. The board resolution prompted Iranian lawmakers to call for Tehran to suspend a voluntary monitoring arrangement with the agency that gives inspectors greater access to information and locations in Iran. 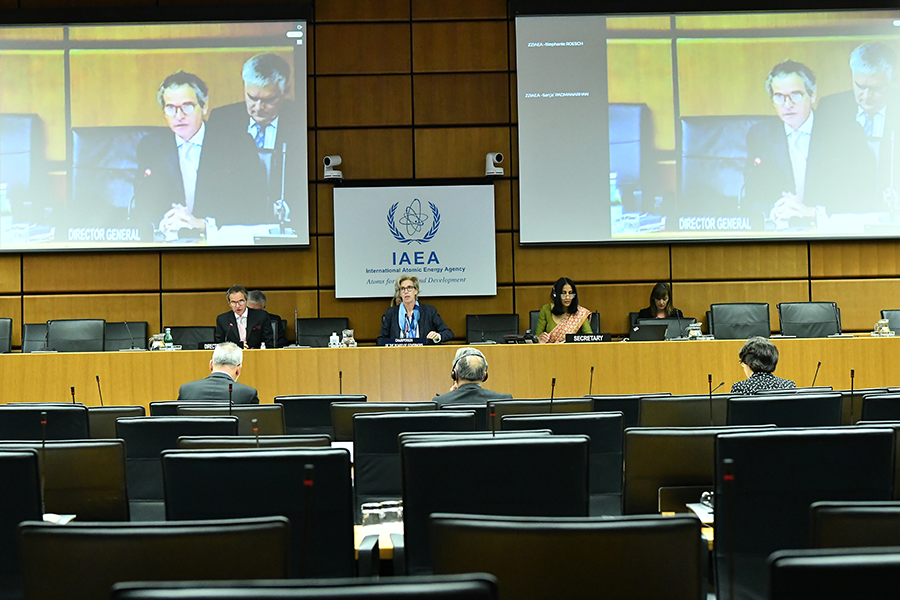 The board passed the resolution June 20 by a vote of 25–2, with seven countries abstaining. France, Germany, and the United Kingdom introduced the resolution after IAEA Director-General Rafael Mariano Grossi said on June 15 that Iran’s continued refusal to cooperate with IAEA requests for information about certain nuclear activities and for access to two locations over the past year was “adversely affecting the agency’s ability” to provide “credible assurance of the absence of undeclared nuclear material and activities.”

The resolution calls on Iran to “satisfy the agency’s requests without further delay” and to provide “prompt access to the locations specified.”

Grossi raised concerns with the board about Iran’s failure to cooperate with the IAEA’s investigation during its previous quarterly meeting in March. In reports issued March 3 and June 5, he said that the IAEA first requested clarifications from Tehran regarding possible undeclared nuclear material and activities at three locations in Iran in January 2019. After a year of attempting to get information from Tehran about the locations in question, the IAEA requested access to two of the sites in January 2020 to take environmental samples. Tehran has refused to allow inspectors to visit the site.

The two reports indicate that the activities and materials in question predate 2003, when the IAEA and U.S. intelligence community assessed that Iran had an organized nuclear weapons program. There is no indication in the report that the IAEA has evidence that any of the activities under investigation are currently ongoing.

Before the vote on the resolution, Iranian Foreign Minister Javad Zarif said Iran has “nothing to hide” and that addressing the IAEA’s investigation is possible but a resolution “will ruin it.” After the vote, he blasted the three European countries for their “total impotence in resisting U.S. bullying.”

Ahead of the vote, Jackie Wolcott, U.S. ambassador to the IAEA, described the resolution as a “balanced and fair reaction to Iran’s alarming refusal to comply with its legal obligations” and urged states to support it. Wolcott said that “ignoring such critical safeguards-related questions in Iran would undermine the implementation of safeguards everywhere.”

According to the June 5 report, the IAEA is seeking information about a uranium metal disc that Iran did not declare to the agency; possible fuel-cycle-related activities, including uranium processing and conversion; and possible storage of nuclear material at a location where explosive testing took place in 2003.

Iran is legally obligated to declare locations where nuclear material is present and respond to IAEA requests for information and access under its safeguards agreement, which is required by the nuclear Nonproliferation Treaty (NPT). Iran has also permitted additional agency monitoring as part of the 2015 nuclear deal, known as the Joint Comprehensive Plan of Action (JCPOA).

According to the June 5 report, Iran told the IAEA in a June 2 letter that it is “willing to satisfy the agency’s requests” but certain “legal ambiguities” must be addressed first.

The IAEA responded to Iran on June 4, saying that the agency’s requests were “strictly in accordance” with Iran’s safeguards agreement and the additional protocol.

In a statement signed by 240 of the 290 members of Iran’s parliament, lawmakers called the resolution “excessive” and demanded that the government “stop voluntary implementation of additional protocol and change inspections.” The statement urged the IAEA to act “independently and professionally, not under the influence of political and hostile pressures of some members” of the board.

Russia and China opposed the resolution, citing concerns about the origin of the evidence behind the IAEA request and the negative repercussions that it could have on the JCPOA.

Wang Qun, Chinese ambassador to the IAEA, said on June 18 that the legal basis of the IAEA request is questionable and that the agency acted too hastily in submitting a report on Iran’s refusal to cooperate to the IAEA board.

Wang said if a resolution were adopted, it could “be the basis for further actions in the [UN] Security Council, leading to the ultimate termination of the JCPOA,” and would damage the global nonproliferation regime.

In 2006, after Iran had failed to comply with several IAEA resolutions urging Tehran to cooperate with the agency’s investigation into illicit nuclear activities, the board referred Iran to the UN Security Council. This led to a series of council resolutions requiring Tehran to halt its nuclear activities and sanctioning Iran for failing to do so. That investigation was resolved in 2015 as part of the JCPOA, and the Security Council sanctions were also modified by the nuclear deal.

Wang blamed the United States, saying the root causes of the issue “lie in the unilateral and bullying practices” of the U.S. maximum pressure campaign.

Although Mikhail Ulyanov, Russian ambassador to the IAEA, said on June 19 that Iran and the IAEA need to resolve the investigation “without delay,” Moscow views the resolution as “counterproductive.”

Brian Hook, U.S. special envoy for Iran, called the Russian and Chinese votes against the resolution “irresponsible” and said on a June 19 press call that “Russia and China tried to shield Iran from scrutiny.”

Ahead of the vote, Ulyanov also raised concerns about information provided to the IAEA from third-party states, saying that there are “no clear rules in the agency on the use of information received from third countries” and it is “high time” this issue was addressed.

Ulanyov was likely referring to information stolen from Iran by Israel and provided to the IAEA. Israeli Prime Minister Benjamin Netanyahu publicly pressured the IAEA on several occasions to follow up on information contained in the documents. (See ACT, November 2018.) The documents allegedly provide more information about Iran’s illicit nuclear weapons program, which the IAEA assessed was halted in 2003.