The U.S. Defense Department is moving forward with plans to acquire conventional ground-launched missiles that fly distances previously banned by the 1987 Intermediate-Range Nuclear Forces (INF) Treaty. The progress follows two demonstration tests of such missiles last year, but the next steps in the development process and how much the Pentagon plans to spend on the missiles is unclear. Whether U.S. allies and partners will agree to host the missiles once they are built also remains to be seen.

The fiscal year 2021 budget request released in February includes $125 million for the Marine Corps to purchase 48 Tomahawk missiles. The budget documents did not include further information about the purchase or whether the Marine Corps planned to buy additional missiles in future years.

Gen. David Berger, the commandant of the Marine Corps, told the Senate Armed Services Committee on March 5 that the U.S. withdrawal from the INF Treaty allows the naval branch to assess the feasibility and utility of firing the Tomahawk missile from a ground launcher. The missile has an estimated range of between 1,250 and 2,500 kilometers.

Berger suggested the missile could be used to “contribute to sea control and sea denial,” but other Marine Corps officials have said the missile would be evaluated for attacking targets on land.

A February report by the Congressional Budget Office questioned whether the Tomahawk missile would be a suitable candidate for a new ground-launched system.

The Marine Corps will work with the Pentagon’s Strategic Capabilities Office “to continue design and development of a mobile launch platform in order to prototype and field a Marine Corps ground-based, long-range, land attack cruise missile capability for employment by its rocket artillery units,” he said. “Prototype launchers will undergo firing and endurance testing through fiscal year 2022, with the aim of fielding a battery of launchers to an operational unit in fiscal year 2023.”

Smith did not say how much the Marine Corps is requesting in fiscal year 2021 and beyond for the launch platform. A Defense Department spokesman told Arms Control Today in February that money appropriated in fiscal year 2020 “will complete the maturation of a conceptual cruise missile launcher.” 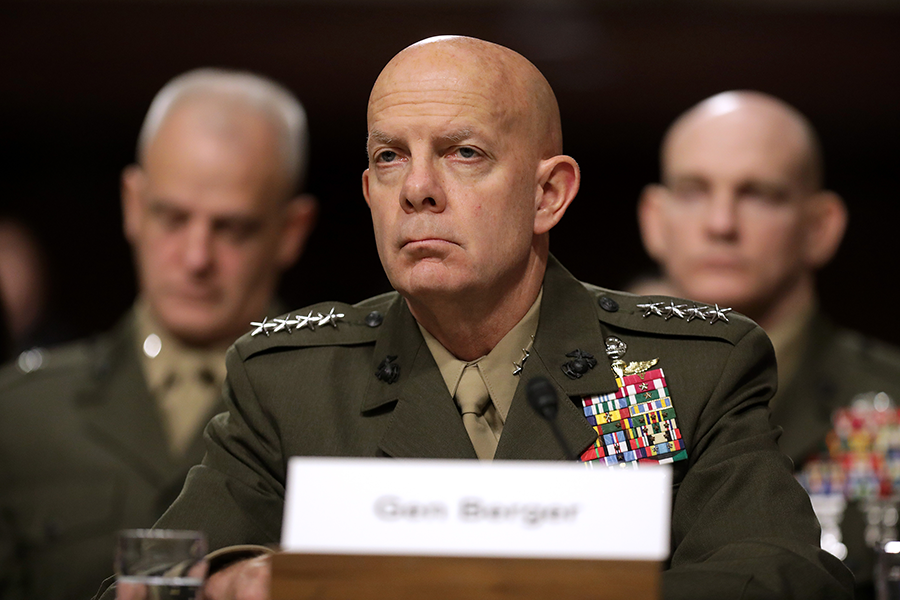 The Defense Department has provided far less information about the status of its plans for developing a ground-launched ballistic missile capability.

Department officials told reporters in March 2019 that the department was seeking a ground-launched ballistic missile with a range of 3,000 to 4,000 kilometers. (See ACT, April 2019.) The officials estimated that the new missile would not be ready for at least five years.

The Pentagon is not requesting new funding for either of the ballistic missile line items Congress funded in fiscal
year 2020.

One possible candidate for the weapon is the Army’s Precision Strike Missile, which the service is developing to replace the aging Tactical Missile System and “attack critical and time sensitive area and point targets.”

The range requirement for the missile is up to 499 kilometers, but that was dictated by the INF Treaty. Army officials have stated the missile could eventually fly as far as 700 kilometers. That range, however, would be far shorter than the 3,000 to 4,000 kilometers department officials previously identified as the goal for a new intermediate-range ballistic missile.

The Army is requesting $123 million for the Precision Strike Missile in fiscal year 2021. The service aims to begin fielding the missile as soon as 2023.

Other ground-launched weapons being pursued by the Army with ranges slated to exceed 500 kilometers include the long-range hypersonic weapon and the strategic long-range cannon. The budget request seeks $801 million for the hypersonic weapon, a massive increase of nearly $400 million above the fiscal year 2020 appropriated level, and $65 million for the cannon program.

The Army’s budget request does not include funding to continue development of a mobile, land-based, medium-range missile, citing an “Army realignment of funds to higher priority programs.” The fiscal year 2020 budget request contained $20 million in initial funding for the program, but Congress only provided $5 million.

The Pentagon’s request to develop missiles formerly prohibited by the INF Treaty was a controversial issue in Congress last year.

The final version of the fiscal year 2020 defense authorization bill prohibited the use of current-year funds to procure and deploy missiles formerly banned by the INF Treaty, but does not prohibit their development and testing, as the House of Representatives’ version of the bill had initially proposed. The bill also required the Pentagon to report on the results of an analysis of alternatives that assesses the benefits and risks of such missiles, options for basing them in Europe or the Indo-Pacific region, and whether deploying such missile systems on the territory of a NATO ally would require a consensus decision by NATO.

Basing new ground-launched missiles in Europe and East Asia is likely to prove challenging. Despite their concerns about Russia and China, U.S. allies have not appeared eager to host the missiles.

A senior Defense Department official told reporters on Feb. 21 that the administration has not “actually spoken to the allies about basing” such missiles “on their territory, at this time.”