As the Trump administration designated the defense industry as essential, notifications of potential new international arms sales have continued during the coronavirus pandemic. In May, however, the firing of the State Department's inspector general and push for new arms sales raised controversy.

The most high-profile concerns, however, focus on a deal that has not yet been formally notified to Congress for new weapons for Saudi Arabia. In a May 27 CNN commentary, ranking Senate Foreign Relations Committee member Bob Menendez (D-N.J.) said he had not received sufficient answers as to why the deal, details of which were not yet public, was needed and that, “Until we have an answer, Congress must reject this new multi-million dollar sale of weapons to Saudi Arabia.” The following day, The New York Times reported that the deal valued at $478 million would include 7,500 precision-guided missiles and licenses to allow Raytheon to expand manufacturing capacity in Saudi Arabia.

Menendez linked his concerns to a congressional effort to block arms sales to Saudi Arabia and the United Arab Emirates in 2019, which was given greater attention when President Donald Trump fired the State Department’s inspector general on May 15. Speaker of the House Nancy Pelosi (D-Calif.) sent a letter to Trump on May 18, saying, “It is alarming to see news reports that your action may have been in response to Inspector General [Steve] Linick nearing completion of an investigation into the approval of billions of dollars in arms sales to Saudi Arabia.”

After Secretary of State Mike Pompeo declared that weapons sales to the countries needed to proceed on an emergency basis in May 2019, bypassing the 30-day notification period, both chambers passed resolutions of disapproval that the president vetoed last July. (See ACT, September 2019.) Members of Congress had asked for the inspector general to start an investigation into the arms sales.

Overall, between March 30 and May 28, Congress was notified of potential foreign military sales of approximately $7.5 billion. If annualized, that pace of $45 billion for sales notifications would be lower than the nearly $70 billion in sales that were notified in 2019.

The recent notifications included two possible attack helicopters sales, valued at either $1.5 billion or $450 million, for a bid request issued by the Duterte regime in the Philippines, as well as $2.3 billion to refurbish 43 Apache attack helicopters in Egypt and $556 million to sell 4,569 mine-resistant ambush protected vehicles to the United Arab Emirates that were declared excess defense articles in 2014. Potential sales to Hungary, Taiwan, and India, valued at $230 million, $180 million and $155 million, respectively, were notified during the period, which also included Kuwait, Morocco, the Netherlands, and South Korea as possible clients.

As expected, the May 20 notification of the potential sale of 18 heavy-weight torpedoes to Taiwan for $180 million elicited Chinese opposition. 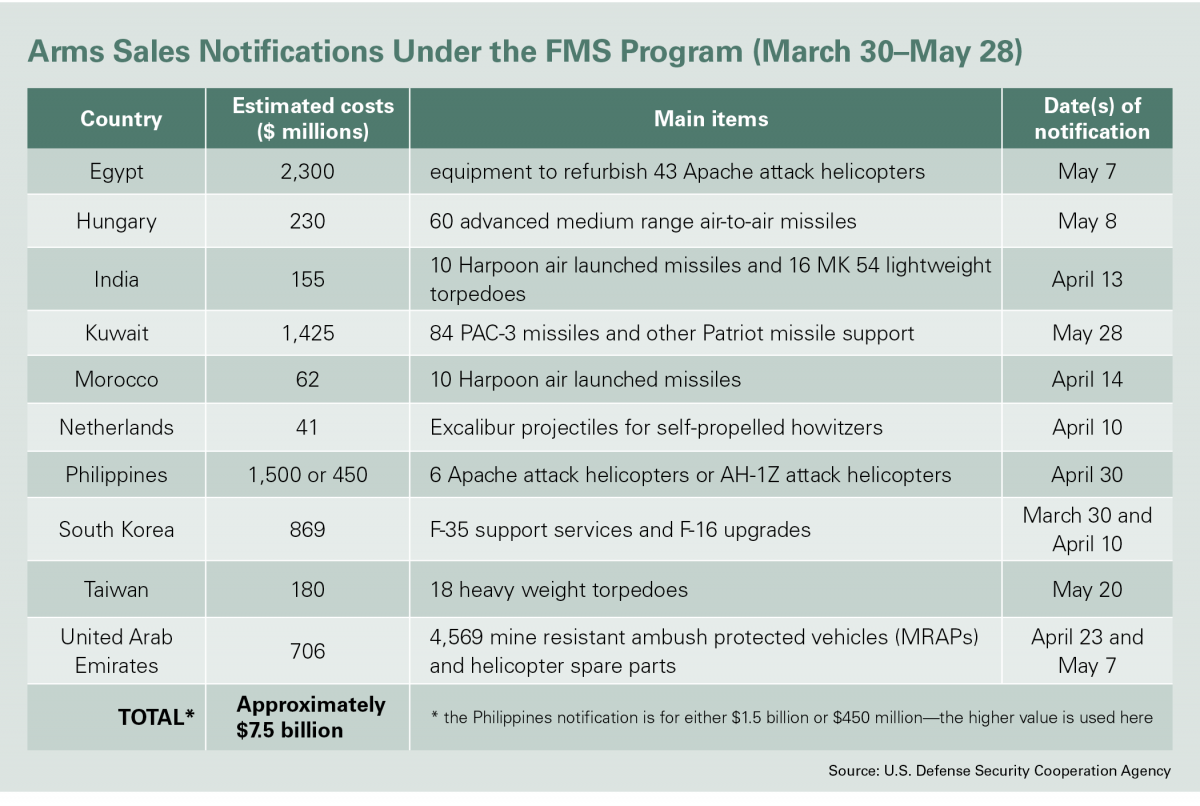