The Bomb: Presidents, Generals, and the Secret History of Nuclear War
By Fred Kaplan (Simon and Schuster, 2020), 384 pages 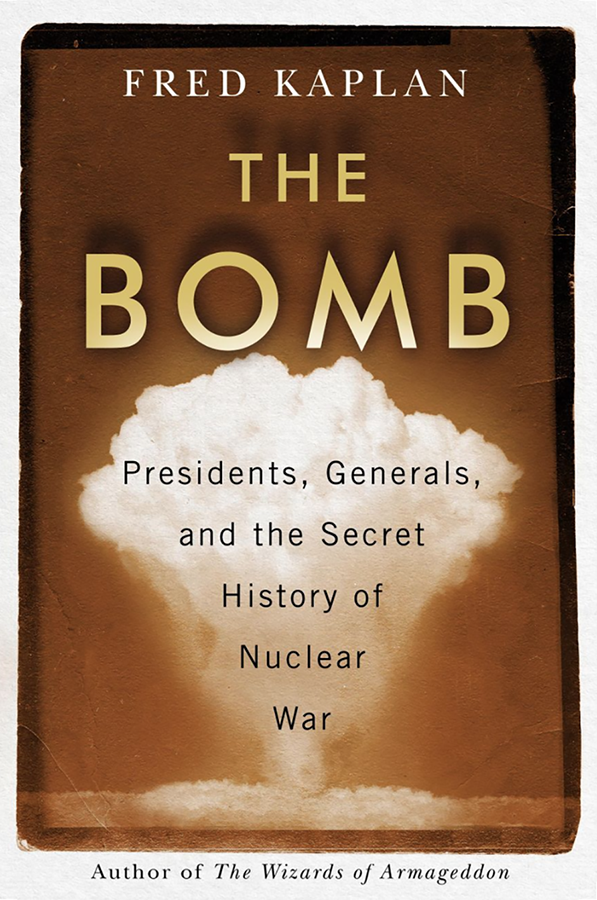 In the late 1980s, Fred Kaplan’s book The Wizards of Armageddon was required reading if you hoped to pass your exams in security studies. That book, as its title aptly suggested, focused on the theorists of nuclear deterrence and other “defense intellectuals” whose novel ideas about deterrence helped shape U.S. nuclear strategy during the Cold War. Now a cult classic for nuclear nerds, it was a path-breaking intellectual history of the people and ideas behind the concept of nuclear deterrence.

Kaplan’s newest book, 36 years later, synthesizes a lifetime of research and reporting to provide an overview of U.S. nuclear deterrence policy, from 1945 to the present, with the perspectives of presidents, their advisers, and the generals in charge of the nuclear arsenal. Kaplan, the long-time national security columnist at Slate, traces their efforts to wrestle with the political, military, and moral paradoxes of threatening all-out nuclear catastrophe as a way to protect the country. Kaplan brings to the task his expert command of the issues, a historian’s appreciation for the archives, and a journalist’s gift for lively, accessible writing and vivid storytelling. He appears to have interviewed every important person, looked at every archive, and viewed every TV interview. The outlines of this story are generally known, especially with regard to the Cold War years, but Kaplan’s account provides important new detail while carrying the story up to the present. The result is an overview of the politics and logic of seven decades of U.S. nuclear war planning that is gripping, illuminating, and ultimately frightening. This book should have wide readership, including in the classroom.

The title of Kaplan’s latest book is slightly misleading. It is not about nuclear war but rather about U.S. war plans and planning, as well as the efforts of U.S. leaders to avoid nuclear war in crises. As Kaplan’s own account drives home, the Pentagon’s war plans may or may not have any meaningful relationship to any actual nuclear war a president might wage. Since nuclear weapons have not been used since 1945, nuclear war planning is an abstract exercise conducted in the absence of any real evidence about how nuclear exchanges might actually take place. Presidents and their military planners can only imagine such a war, leading one scholar to refer to nuclear strategy as the “imaginary science.” The numerous unknowns of nuclear war planning give rise to many of the political dynamics and the tortuous strategic logic explored in Kaplan’s book.

The book focuses on the ambitious and often unsuccessful efforts of presidents and their civilian advisers to impose some restraint on the size of the nuclear arsenal and to shift the targeting plans away from a massive, all-out strike to more “controllable” options. Kaplan introduces us to the people and personalities who have shaped the U.S. nuclear arsenal and plans for its use, while taking us into discussions deep inside the Pentagon, at the White House, and at Strategic Air Command (SAC) headquarters in Omaha. Throughout, Kaplan tells dramatic stories of presidents often standing up to their hawkish military advisers to avoid getting into a nuclear war or even just to pursue arms control. He provides new details about how John Kennedy faced crises in Berlin and Cuba, Jimmy Carter dealt with arms control, Ronald Reagan at first embraced nuclear warfighting and then nuclear abolition, Bill Clinton and George W. Bush dealt with North Korea, and Barack Obama put disarmament on the agenda.

Interservice rivalries between the Army, Navy, and Air Force drove nuclear policy in the early years after 1945 and helped set the precedent for a steady nuclear arms build-up and a U.S. nuclear war plan that threatened massive, all-out nuclear strikes on the Soviet Union and China.

Subsequent chapters then delve into the efforts of presidents and their advisers, beginning with Kennedy, to seek alternatives to the massive first-strike plan of the Single Integrated Operational Plan (SIOP) for nuclear war, that would have killed millions of Soviet and Chinese citizens. The civilian leaders also faced steady resistance from the generals at SAC and the Joint Chiefs of Staff who would actually control the nuclear strikes. Kennedy’s defense secretary, Robert McNamara, famously toyed with the idea of a “counterforce” doctrine that would target Soviet missiles rather than cities, but abandoned it when he realized that it would lead the military chiefs to ask for even more weapons. In the end, McNamara compromised by letting them have 1,000 intercontinental ballistic missiles, more than he thought necessary for deterring the Soviet Union. He also accepted a public declaratory doctrine that emphasized “assured destruction,” a policy he knew to be inconsistent with the SIOP’s first-strike plans.

Inconsistency and contradiction became dominant themes. In the 1970s, President Richard Nixon and Secretary of State Henry Kissinger were frustrated by the lack of options in the SIOP and wrestled with the puzzle of how to fight a “limited” nuclear war to protect allies in Europe and Asia. Given that no one could figure out how to keep a limited war limited, however, they could not come up with a scenario in which the United States was better off using nuclear weapons first. Kaplan traces how Carter, who abhorred nuclear weapons, reluctantly approved medium-range missiles in Europe because they were politically useful although of marginal military value. Ironically, as Kaplan shows, it was under the hawkish Reagan administration, which advocated “prevailing” in a nuclear war, that the first effective effort to take a scalpel to the SIOP began, resulting in the biggest cuts in the nuclear arsenal until then.

Kaplan brings important new detail to both familiar and lesser-known cases. Particularly notable are his expansive account of Deputy National Security Advisor Carl Kaysen’s first-strike planning during the 1961 Berlin crisis, as well as the fascinating and detailed story of the successful efforts of Frank Miller and a group of civilians in the Pentagon during the late 1980s to make deep cuts in the number of strategic weapons. Closer to the present, drawing on recent reporting and interviewing, he provides an illuminating account of how Obama, the “disarmament” president, was beaten back by the defense establishment and its strategic dogmas. He also traces the writing of and arguments behind the Trump administration’s 2018 Nuclear Posture Review and its controversial revival of the concept of limited nuclear war.

Kaplan’s sympathies clearly lie with the civilian leaders trying to reel in overkill in the face of resistance from recalcitrant generals. Yet, even former Obama Defense Secretary Ashton Carter, once the boy wonder of “nuclear winter” analysis in the 1980s, comes in for criticism for drinking the Kool-Aid on the need to maintain a threat of first use and resisting Obama’s efforts to move to a “sole use” policy.

Overall, the book provides a devastating portrayal of the insanity of the nuclear targeting process. In one case, 69 warheads were targeted on a single Soviet anti-ballistic missile site. In 1990, SAC commander Jack Chain told Congress that he needed 10,000 weapons because SAC had identified 10,000 targets, rather than defining any strategic goal. Achieving excessive destruction was a goal in itself. As Kaplan writes, “The SIOP was a broken machine, the discombobulated aggregate of compartmentalized calculations.”

Kaplan’s account makes clear that civilian leaders from Kennedy to Obama, as well as some military officers, were appalled by the massive overkill of the war plans. Kissinger called the SIOP a “horror strategy.” Yet, every president faced stiff resistance in trying to wrest control over the nuclear arsenal from SAC and the Joint Chiefs. Regardless of the publicly stated nuclear doctrine, the generals have pushed for a first-strike capability from the beginning and remained skeptical of graduated options. People who knew better, such as McNamara, argued for larger than necessary arsenals simply for political and bureaucratic reasons. Still, even those who advocated for “controlled” options had to admit that, in the end, this was magical thinking.

The take-home message of Kaplan's book is sobering. Despite the much-vaunted civilian control over the military that supposedly exists in the United States, the story told here suggests the opposite. The SIOP did not necessarily reflect the president’s desires or policies. Even when there was guidance for limited options, SAC did not follow it. Moreover, when war plans might have looked like they contained options, a closer look would reveal that even the smallest strike was still massive, and SAC consistently had ways of understating the damage.

This is not a very reassuring story for the command and control of the nuclear arsenal today. At the same time, it may reflect a point on which, ironically, the hawkish generals and the pro-nuclear abolition advocates might agree: the notion of a limited nuclear war is simply meaningless.

It also suggests that, in the end, there seem to be no answers to the paradoxes of nuclear strategy. Kaplan employs the metaphor of “going down the rabbit hole” to describe the effort to parse nuclear abstractions or to resolve the paradox of threatening a catastrophically destructive war you would never really want to fight, until you finally give up because the questions, such as whether there is such thing as a limited nuclear war, are ultimately unanswerable. As this masterful book shows, every U.S. administration has begun with an effort to get a rational grip on the nuclear arsenal and, in the end, like every administration before it, has gone down the rabbit hole of nuclear abstractions.

Nina Tannenwald is a senior lecturer in the Department of Political Science at Brown University.