The Boeing Co. announced in July that it would not bid on the contract to develop a new intercontinental ballistic missile (ICBM) system amid controversy in Congress about the project’s rationale and viability. 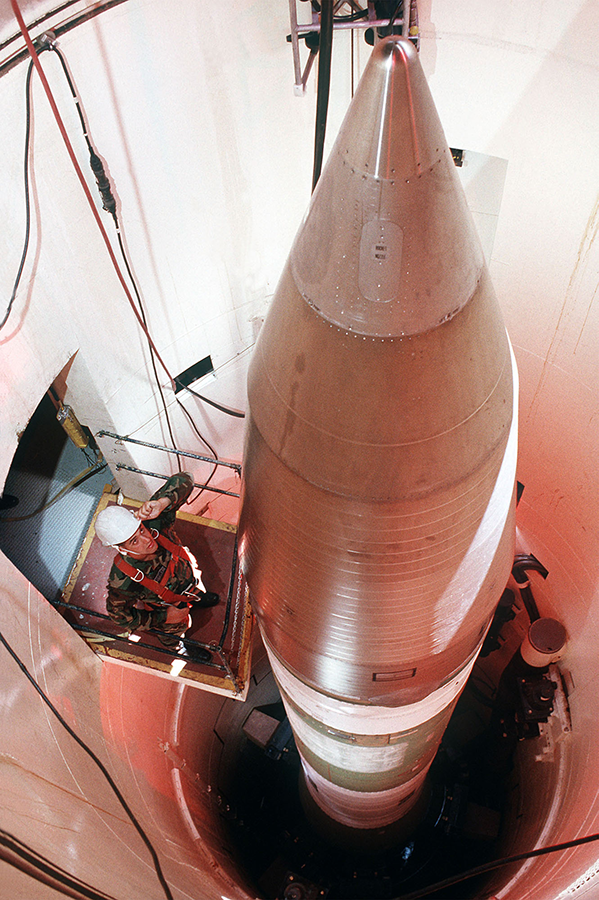 “After numerous attempts to resolve concerns within the procurement process, Boeing has informed the Air Force that it will not bid [on] Ground Based Strategic Deterrent (GBSD) Engineering and Manufacturing Development (EMD) under the current acquisition approach,” said Todd Blecher, a company spokesman.

First reported by Inside Defense on July 24, the company’s exit leaves Northrop Grumman Systems Corp. as the only company left competing for the contract.

In August 2017, the Air Force selected Boeing and Northrop to proceed with development of the Minuteman III ICBM replacement. (See ACT, October 2017.) On July 16, the Air Force issued a request for proposals for the EMD contract to produce and deploy the system. The service planned to award the contract in the summer of 2020.

Boeing complained, however, that Northrop had “unfair advantage” in the competition after acquiring last year the firm Orbital ATK, one of the nation’s two producers of solid rocket motors. Boeing has asked the Pentagon to adjust the bid acquisition parameters, but it remains to be seen how the Defense Department will respond.

If the department stays the course and moves ahead without competition, it would have less leverage to control costs. There is no precedent for the absence of competition for a development contract the size of the GBSD program.

The Defense Department is planning to replace the Minuteman III missile, its supporting launch control facilities, and command-and-control infrastructure. The plan is to purchase 666 new missiles, 400 of which would be operationally deployed through 2070.

The Trump administration’s fiscal year 2020 budget request included $570 million for research and development for the GBSD program and $112 million to continue the design of the W87-1 warhead to replace the W78 warhead currently carried by the Minuteman III. (See ACT, April 2019.)

The Defense Department completed another independent cost estimate of the program in June, but has yet to disclose whether the projected cost of the program has changed.

The Air Force argues that a new ICBM is necessary because the fleet of 400 deployed Minuteman III missiles is aging into obsolescence and losing its capability to penetrate adversary missile defenses. According to the report of the 2018 Nuclear Posture Review, the life of the Minuteman III “cannot be extended further.”

A 2014 Air Force analysis, however, did not determine that extending the life of the Minuteman III is infeasible. Instead, the study found that the price to build a new missile system would be roughly the same as the cost to maintain the Minuteman III.

The service arrived at this conclusion by comparing the total life-cycle cost of the two options through 2075 and assuming a need to deploy 450 missiles for the entire 50-year service life of the new missile system.

Critics of the GBSD program claim that if the requirements for 450 missiles, a 50-year service life, and new capabilities are relaxed, then it is possible to extend the life of the Minuteman III for a period of time beyond 2030 and at less cost than the current approach.

The Congressional Budget Office projected in 2017 that $17.5 billion in fiscal year 2017 dollars could be saved through 2046 by delaying development of a new ICBM by 20 years and instead extending the life of the Minuteman III by buying new engines and new guidance systems for the missiles. (See ACT, December 2017.)

Citing concerns about the need for and ability to execute the GBSD program as planned, the fiscal year 2020 National Defense Authorization Act (NDAA) and defense appropriations bill passed by the Democratic-led House this summer eliminated the Pentagon’s funding request to proceed to the main development phase of the GBSD program.

Both bills also halved the funding request for the W87-1 warhead and cut $241 million from the Energy Department’s request of $712 million to expand the production of plutonium pits to at least 80 per year in support of the W87-1 life extension program.

A draft version of the House NDAA also would have required an independent study on the benefits, risks, and estimated cost savings of extending the life of the Minuteman III through 2050 and delaying the GBSD program. The provision was stripped out during the House Armed Services Committee’s markup of the bill in June.

An amendment to restore the provision on the House floor failed by a vote of 164–264.