Roland Timerbaev, who passed away in mid-August at the age of 91, was a true giant—both as an arms controller and as a human being. I doubt we will see his like again. 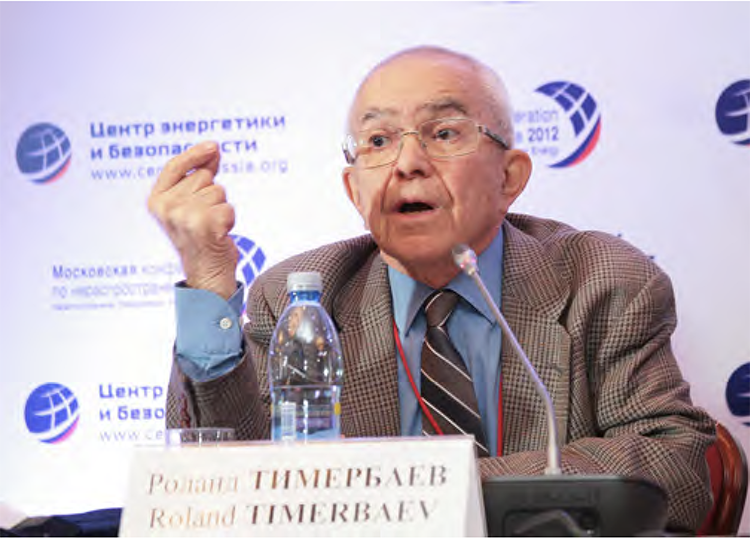 From the 1950s, after a brief stint at the fledgling United Nations, Timerbaev was directly supporting Soviet Foreign Minister Andrei Gromyko on nuclear weapons issues. (He remembered drafting the first Soviet proposal for a fissile material cutoff treaty in 1958.)  Preventing nuclear annihilation became his consuming, life-long passion. He retired from the Foreign Ministry just as the Soviet Union was collapsing, resigning as permanent representative to the international organizations in Vienna, including, of course, the International Atomic Energy Agency (IAEA).

He is best known for his key role in negotiating the nuclear Nonproliferation Treaty, where he first met my father, George Bunn, who served on the U.S. delegation. As Timerbaev remembered, while neither of them were the heads of their respective delegations, they were often the “day-to-day negotiators” of the treaty, assigned to find ways to overcome the blockages that arose.1 It was Timerbaev and his colleague Vladimir Shustov, with Bunn and the U.S. delegate Culver Gleysteen, who broke the impasse on the safeguards article during a hike in the mountains near Geneva, even though both sides had been instructed not to compromise.2

Working together on the NPT, Timerbaev and my father built a close friendship and professional partnership that lasted the rest of their lives; in a letter for a Stanford celebration of my father’s career in 2004, Timerbaev wrote that their friendship and cooperation had been “the most rewarding [professional] thing I have ever experienced.”

The NPT was by no means the end of Timerbaev’s nonproliferation work. He played a key role in launching the Nuclear Suppliers Group, working through the night with British ambassador John Thomson (later the founding chairman) in early 1975—with the assistance of a good dinner and some whiskey back in the hotel room—in negotiating the documents that announced the initiative. He made major contributions to IAEA safeguards, to the negotiation of the Anti-Ballistic Missile Treaty, and to many other key nuclear accords.

After leaving the Foreign Ministry, Timerbaev spent several years at what is now the James Martin Center for Nonproliferation Studies (CNS) at the Middlebury Institute of International Studies at Monterey, teaching, writing, and launching a variety of policy initiatives. He was particularly proud of having brought most of the members of the Ukrainian parliament to Monterey for nonproliferation training before the crucial vote that confirmed Ukraine’s non-nuclear-weapon status.

Working with Vladimir Orlov, Timerbaev then launched the PIR Center in Moscow, one of the most important nongovernmental nonproliferation organizations in Russia. He was an encouraging and tireless teacher and mentor, training generations of Russian and global nonproliferation experts. He was also an indefatigable writer; in particular, his history, Russia and Nuclear Nonproliferation, 1945–1968, became a standard Russian text.

Beyond all these accomplishments, Timerbaev was a warm and generous person, charming everyone from diplomatic counterparts to graduate students. He told his CNS colleague William Potter that he “collected friends the way other people collect art.” A visitor to his home was always welcomed with enthusiasm and with a kaleidoscopic conversation ranging from the fate of the universe to music to the issues of the day—and with a gentle chiding if the visitor preferred water to whiskey or wine. He was a loving husband, father, and grandfather, and a classical music aficionado (especially Rachmaninov’s fiendishly complex 3rd Piano Concerto). He genuinely cared both about reducing the dangers posed by nuclear weapons and about the individual people living under that Sword of Damocles. He will be sorely missed.

2. Part of that story is recounted in “In Memoriam: George Bunn.” For Timerbaev’s take on the continuing importance and success of the NPT, see Anton V. Khlopkov, “Roland Timerbaev: The Nuclear Noproliferation Treaty Has Largely Achieved Its Goals (Interview),” Arms Control Today, September 2017.

Matthew Bunn is a professor of practice at Harvard University’s John F. Kennedy School of Government.

The Revolution That Failed: Nuclear Competition, Arms Control, and the Cold War