Forty years ago, the Arms Control Association may have played an embryonic role in the most influential U.S. cultural event to inform Americans of the horrors of nuclear war. 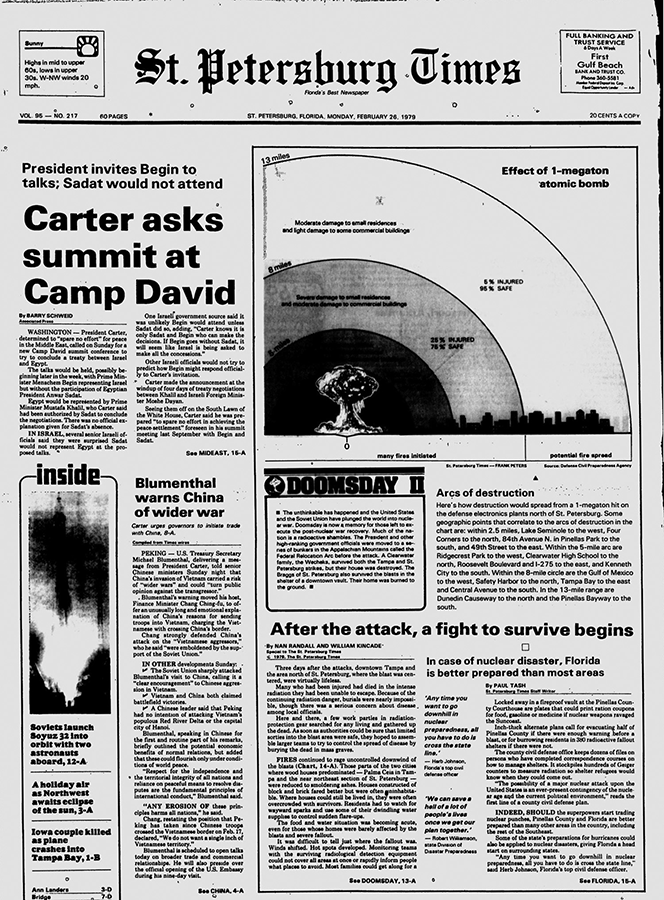 In late 1978, editors at the Florida's St. Petersburg Times newspaper decided to run a large feature on the effects of a nuclear blast. Knowing little about the technical aspects of such an event, they sought guidance.

The Association was a “tremendous, tremendous help in those pre-internet days,” recalled Frank Peters, the newspaper’s graphic artist who prepared the article’s many color illustrations.

Randall’s experience drew the attention of the now-defunct Office of Technology Assessment (OTA), and the federal scientific advisory agency enlisted her to write a similar account focused on the effects of a nuclear attack on Virginia and Washington, D.C.  for an annex to the May 1979 OTA report “The Effects of Nuclear Weapons.” Randall's story was titled "Charlottesville."

Soon after, Stanford University physicist Michael Riordan was seeking projects for a small publishing house he managed. He spoke with his university colleague Sidney Drell, an association director from 1978 to 1994, who recommended he look at the OTA report.

Riordan edited and reorganized the report, leading off with Randall’s story, and published the book in 1982 to immediate acclaim just as the Nuclear Freeze movement was peaking with millions of supporters protesting the nuclear arms race.

“The book was in response to people wondering about the consequences of President Ronald Reagan’s interest in new nuclear weapons,” Riordan told Arms Control Today.

It was titled The Day After Midnight.

Randall's appendix to the OTA report, “Charlottesville, ” also caught the attention of the director and writer who was tapped to create an ABC-TV docu-drama on the human consequences of nuclear conflict titled The Day After.

When it was broadcast the evening of November 20, 1983, The Day After drew some 100 million viewers, then a record audience for a made-for-television movie. ABC followed up the broadcast with a live-televised town hall discussion featuring then-Secretary of State George Shultz, astronomer Carl Sagan, and former Secretary of Defense Robert MacNamara.

The movie boosted public awareness of the risks of nuclear war and demanded the attention of policy makers to take action to reduce the danger. President Reagan watched and was moved.

In 1987, when the United States concluded the Intermediate-Range Nuclear Forces Treaty with the Soviet Union, President Ronald Reagan sent a telegram to the director: “Don’t think your movie didn’t have any part of this, because it did.”

Reflecting back on the St. Petersburg Times series, the OTA report, and The Day After, Riordan said, “I’d like to think there was chain of causation, but I can’t prove that.”Unquestionably, depictions of the humanitarian impacts of nuclear weapons use have profoundly affected public perceptions of the risks of nuclear war.