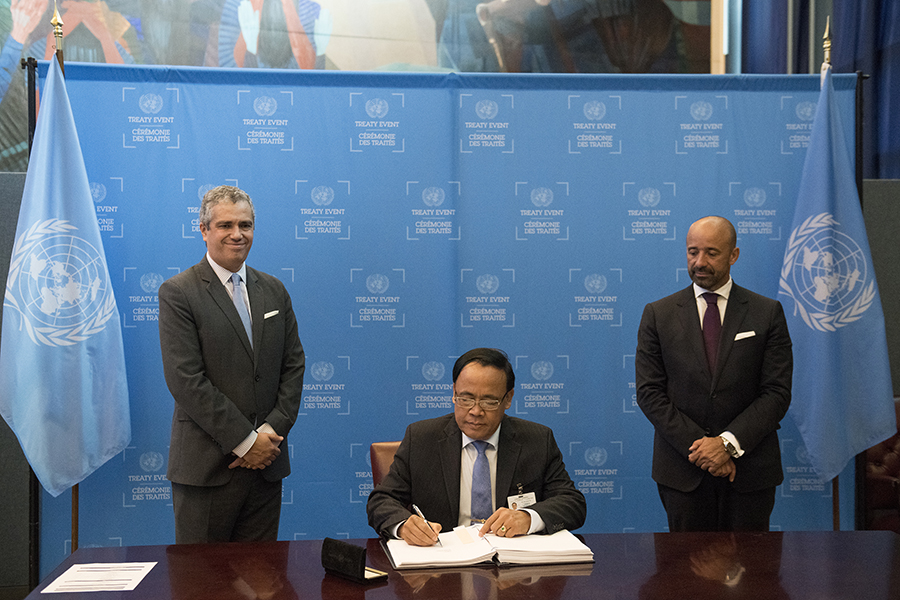 Two countries signed the treaty shortly after the ceremony, bringing the total number of states-parties to 19 and signatories to 69 as of Nov. 1. The treaty enters into force after ratification by 50 states.

“I love seeing states sign and ratify #nuclearban treaty,” Beatrice Fihn, the executive director of the International Campaign to Abolish Nuclear Weapons (ICAN), wrote on Twitter. “Each one of these states is chipping away at the legitimacy of nuclear weapons and moving us closer to a world without nuclear weapons.”

“When the treaty was opened for signature one year ago, the secretary-general noted that it was the ‘product of increasing concerns over the risk posed by the continued existence of nuclear weapons, including the catastrophic humanitarian and environmental consequences of their use,’” Izumi Nakamitsu, UN high representative for disarmament affairs, stated at the recent ceremony. “The number of signatures and ratifications to date shows that these concerns remain paramount in many states’ minds.”

Angola, Antigua and Barbuda, Benin, Brunei, Guinea-Bissau, Myanmar, Saint Lucia, Seychelles, and Timor-Leste signed the treaty at the signing ceremony; Gambia, Samoa, San Marino, and Vanuatu ratified it. Twenty-one of the 69 treaty signatories are from the African continent, 13 from Asia, 13 from North America, 10 from South America, seven from Oceania, and five from Europe, including the Holy See. The Oceanic region has the most states-parties (five), while Africa has the fewest, with only one.

The pace of signatures and ratifications is similar to the nuclear Nonproliferation Treaty, which had 71 signatories and 14 states-parties a year after it opened for signature.

Close to 50 non-nuclear-armed countries expressed support for the treaty during the initial week of the UN General Assembly First Committee meeting. However, nuclear-armed countries and many of their allies scorn the treaty, as reflected in several of their statements and a strong joint denunciation by China, France, Russia, the UK and the United States. Proponents of the treaty “do not offer solutions to these security challenges, or even acknowledge that they play a role in states’ thinking about deterrence and disarmament…. Instead, they seem to believe that we can skip to the final step of this process—simply banning nuclear weapons—and trust that the details will work themselves out,” Andrea Thompson, U.S. undersecretary of state for arms control and international security, told the committee on Oct. 10.

Several states have recently published reports on their investigations into national consequences for treaty accession. Sweden, which launched such an inquiry a year ago, has said that it would publish the results by Oct. 31. The Swiss government decided in August against signing, although there is continuing action in the legislature favoring signature. (See ACT, May 2018.) Norway, a NATO member covered by the U.S. nuclear umbrella, released its review in early October. Kjølv Egeland, a fellow at the Norwegian Academy of International Law, tweeted on Oct. 9 that the report concludes that Norway signing the treaty is “off the table for now,” given that it would contradict nuclear deterrence policy.

Civil society groups, such as the Norwegian Academy of International Law, have issued reports considering the implications of joining the treaty. The Women’s International League for Peace and Freedom in Sweden, an ICAN partner organization, published a compilation of essays urging Swedish ratification and examining the treaty’s relationship to Swedish security arrangements and trade. On Oct. 29, Norwegian People’s Aid, a member of ICAN’s steering committee, released the Nuclear Weapons Ban Monitor, assessing the compliance of 197 states with the treaty.