Israeli Prime Minister Benjamin Netanyahu revealed what he described as a secret nuclear warehouse in Iran and publicly called for International Atomic Energy Agency (IAEA) inspectors to visit the site, putting pressure on the international watchdog agency that could hamper its independence. 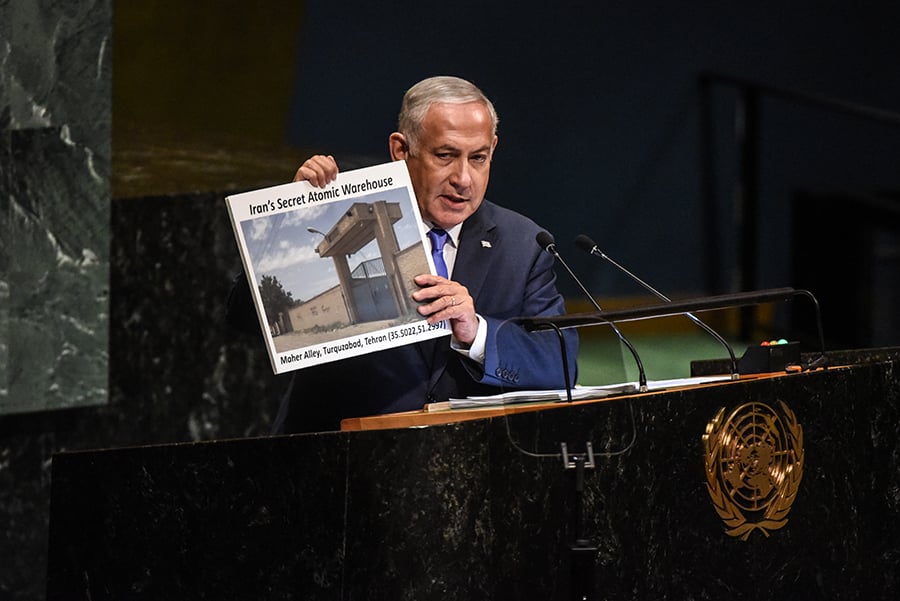 Netanyahu’s allegations come as the United States is pressuring countries to support its sanctions on Iran and as the remaining P4+1 parties (China, France, Germany, Russia, and the United Kingdom) to the July 2015 nuclear deal with Tehran are taking steps to work around the coercive U.S. measures and preserve the accord. (See ACT, October 2018.)

Speaking at the UN General Assembly on Sept. 27, Netanyahu described the facility in central Tehran as a “secret atomic warehouse for storing massive amounts of equipment and material from Iran’s secret nuclear weapons program.” Netanyahu called on IAEA Director-General Yukiya Amano to “do the right thing” and inspect the warehouse “immediately” before Iran finished clearing it out.

Amano pushed back in an Oct. 2 statement, saying that the agency does not take any information at “face value.” Although Amano did not mention Netanyahu directly, he said that all material, including that received from third parties, is subject to a rigorous and independent assessment. Further, Amano said that IAEA nuclear verification work “must always be impartial, factual, and professional” and that the agency’s independence is “of paramount importance.”

Netanyahu’s remarks garnered headlines around the world, but it remains unclear whether the facility is of interest to the IAEA. Still, Netanyahu’s comments could complicate work by the agency. IAEA inspectors should visit the facility if their assessment determines that an inspection is warranted. Yet, if inspectors visit the site now, it may appear as if the IAEA is acting at Israel’s behest, which would jeopardize the agency’s credibility and independence.

Brandishing a picture of the facility, Netanyahu charged that Iran removed 15 kilograms of radioactive material from the warehouse in August. It is not clear if Netanyahu was referring to uranium, plutonium, or another radioactive material. Possession of undeclared uranium or plutonium would violate Iran’s safeguards agreement and the multilateral nuclear deal known as the Joint Comprehensive Plan of Action, but radioactive materials used for a variety of purposes, including medical and industrial activities, are not subject to the same restrictions.

U.S. intelligence officials also disputed Netanyahu’s description of the facility and said his comments were misleading. One intelligence official quoted by Reuters on Sept. 27 said that the facility has been known to the U.S. intelligence community for some time and is full of documents, not nuclear equipment. The officials said that “so far as anyone knows, there is nothing in it that would allow Iran to break out” of the nuclear deal any faster. Iranian officials immediately denounced Netanyahu’s accusation as a farce, and Iranian Foreign Minister Javad Zarif said on Sept. 30 that Netanyahu is “desperately seeking to find a pretext to create hype” about Iran’s nuclear program.

This is the second time Netanyahu has publicly revealed what he describes as secret information tied to Iran’s nuclear weapons program. In February 2018, Israel stole archival material from a facility in Iran that appears to document activities related to the country’s nuclear weapons development and shared the information with several states and the IAEA.

Netanyahu publicly revealed that the raid took place and released some details from the stolen material at a press conference in April, just weeks before U.S. President Donald Trump’s decision to withdraw from the nuclear agreement and reimpose sanctions, despite Iran’s compliance with the provisions of the deal. Israel is one of the few states that encouraged Trump to withdraw from the accord.

In his Sept. 27 speech, Netanyahu claimed that the IAEA “has still not taken any action” following up on the archival material and “has not demanded to inspect a single new site.”

The information shared publicly confirms what the IAEA and the U.S. intelligence community already concluded, that Iran had an organized illicit nuclear weapons program that it abandoned in 2003, although some activities continued. The IAEA reported in 2015 that it had no evidence of nuclear activities with military dimensions after 2009.

Netanyahu’s allegation that the IAEA has done nothing appears to be at odds with the U.S. assessment.

During the IAEA Board of Governors meeting on Sept. 11–14, Nicole Shampaine, an official at the U.S. mission in Vienna, told the board that the United States supports the agency’s “careful assessment of the newly acquired archive materials.” She said any “concern” related to undeclared nuclear activities or material must be pursued and the United States has “full confidence” in the IAEA and its inspectors “to do so appropriately.”

If any of the archival material indicated that Iran pursued illicit nuclear activities after the nuclear deal was concluded, it is likely that the Trump administration would have accused Iran of violating the agreement and its safeguards obligations under the nuclear Nonproliferation Treaty (NPT), given Trump’s animosity toward the accord.

The U.S. State Department released a report in April that concluded Iran is in compliance with its NPT obligations and, through 2017, with the Iran nuclear deal.