U.S. President Bill Clinton and Russian President Boris Yeltsin, during their March 1997 summit in Helsinki, discussed over dinner their common burden of having an always-close-by nuclear “football,” a briefcase containing documents and communications gear necessary to initiate nuclear war. 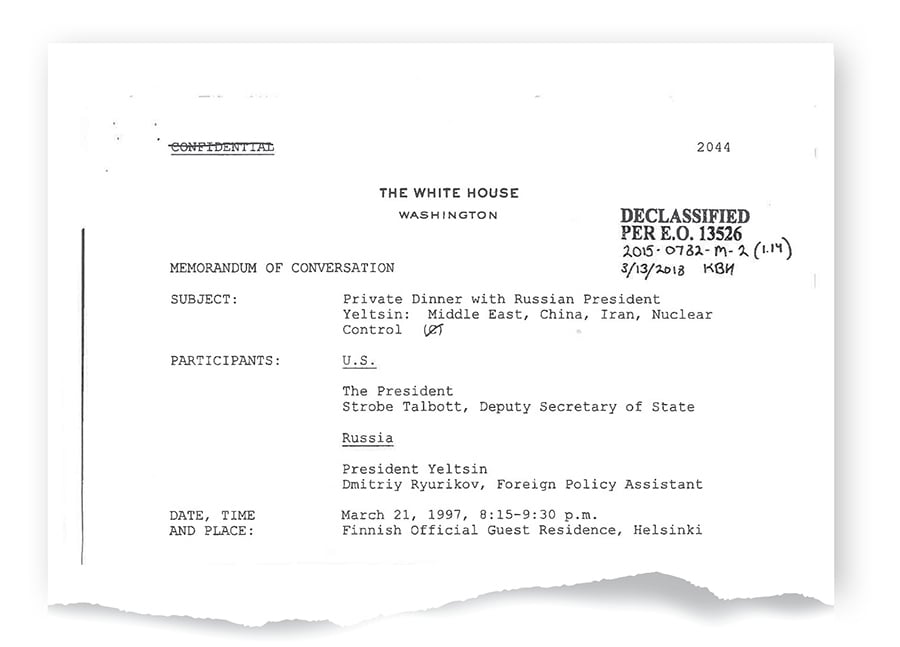 As described in a recently declassified U.S. memorandum, the two leaders compared experiences of having briefly surrendered nuclear authority while undergoing medical operations. Clinton talked about the U.S. procedures for passing power temporarily to the vice president. Yeltsin recalls that, at the time of his 1996 heart surgery, he briefly passed authority, and his nuclear briefcase, to Prime Minister Viktor Chernomyrdin.

The following is an excerpt from the official U.S. memorandum of conversation, released by the Clinton Presidential Library, in which Yeltsin jokes about the brief handoff to the prime minister:

President Yeltsin: Chernomyrdin did not have very long to play with these toys.

The President: Well let's hope none of us ever have to play too much with those toys.

President Yeltsin: I have actually taken part in an exercise with the Russian “football” at one point that involved launching a warhead onto the Kamchatka Peninsula.

(The President then describes the plot of the movie “Crimson Tide” and how it has demonstrated some of the dangers of being on a nuclear-hair trigger, although he says his people have told him that the plot of “Crimson Tide” could not actually happen.)

President Yeltsin: What if we were to give up having to have our finger next to the button all the time? We have plenty of other ways of keeping in touch with each other. They always know where to find us, so perhaps we could agree that it is not necessary for us to carry the chemodanchik (Russian term for their equivalent of the “football”).

The President: Well, I'll have to think about this. All we carry, of course, are the codes and the secure phone.

President Yeltsin: Yes, you and I are the only leaders who have to do this.

(The President calls on [U.S. Deputy Secretary of State Strobe] Talbott to comment.)

Talbott: Mr. President, given the responsibilities of your office and President Yeltsin's, it makes more sense for the two of you to have these devices with you at all times rather than to have the function assigned to a computer somewhere or to anyone else.

The President: Well, if we do the right thing in the next four years, maybe we won't have to think as much about this problem. This issue of nuclear reduction is very important. If we were able to get to the place where our successors could go even lower than 2,000 nuclear weapons on all sides, then we would have to come to some understanding with the Chinese and the Indians and others, because it's absolutely crazy for countries as poor as those to have to waste so much money on nuclear weapons.

(It was on that subject that the dinner ended.)