“The Arms Control Association and all of the staff I've worked with over the years … have this ability to speak truth to power in a wide variety of venues.”
– Marylia Kelley
Tri-Valley Communities Against a Radioactive Environment
June 2, 2022
UN Unveils Broad Disarmament Agenda

The backdrop for his agenda, Guterres noted, is an increasingly bleak disarmament environment, including a lack of strategic dialogue among the nuclear-weapon states, the return of chemical weapons use, and the rise of conflicts that are deadly for civilians. 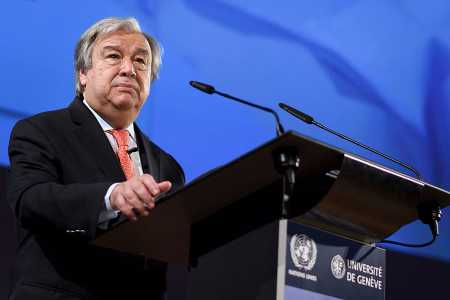 Reflecting that, Guterres’ 87-page agenda is far more wide-ranging than the five-point nuclear disarmament proposal advanced in 2008 by his immediate predecessor, Ban Ki-Moon. “Disarmament concerns every country, and all weapons, from hand grenades to hydrogen bombs,” Guterres said in his speech May 24 at the University of Geneva.

Guterres’ comprehensive approach will please many constituencies, but its breadth may make it difficult to focus and make progress on individual issues. But he said that the elimination of nuclear weapons “remains our priority,” and he appealed specifically to the United States and Russia to “resolve their dispute” over the Intermediate-Range Nuclear Forces Treaty; to extend the New Strategic Arms Reduction Treaty, which is due to expire in three years; and to “take new steps toward reducing nuclear stockpiles.”

The UN chief, who took office in January 2017, expressed concern that existing U.S.-Russian arms control agreements are “threatened as never before” and that there currently are no talks between the two powers on further reducing nuclear arsenals.

Izumi Nakamitsu, UN high representative for disarmament affairs, consulted with civil society organizations to prepare the new agenda. It puts forward recommendations for actions to promote the disarmament of weapons of mass destruction, restrictions on conventional weapons, and monitoring and restriction of emerging weaponized technology.

Guterres also recommended that all states affirm the norm against the use of nuclear weapons and that nuclear-weapon states should stand behind U.S. President Ronald Reagan’s assertion that “a nuclear war cannot be won and must never be fought.”

None of these suggestions are new, and many have languished, some for decades, in international forums such as the nuclear Nonproliferation Treaty (NPT) review meetings and the Conference on Disarmament. But nuclear disarmament verification has seen recent progress, including the creation of the 2014 International Partnership for Nuclear Disarmament Verification, and the 2018 UN Group of Governmental Experts on the same subject.

Ban’s proposal made many of same recommendations, including the entry into force of the CTBT and the negotiation of an FMCT, although it had a stronger emphasis on beginning negotiations leading toward disarmament. Guterres supported these negotiations, although he suggested first generating dialogue and building confidence in formal and informal settings. In response to a question, Guterres called the Treaty on the Prohibition of Nuclear Weapons enormously important and said that it could instigate further action on disarmament.

On May 18, the International Partnership Against Impunity for the Use of Chemical Weapons released a statement supporting the call for a special meeting of the Chemical Weapons Convention conference of states-parties to explore options to restore accountability for chemical weapons use. The UN Security Council has failed to adopt a resolution creating a new chemical weapons accountability body after the previous one expired in November 2017 due to repeated Russian vetoes, most recently on April 10 (See ACT, May 2018.)

Turning to conventional weapons, Guterres expressed the need to protect civilians in conflict, including by raising awareness of the impact of explosive devices in populated areas and sharing best practices among states. Citing a lack of coordination among UN agencies working to prevent the spread of small arms and light weapons, Guterres announced that he would establish a “dedicated facility” to support governmental action to control these weapons.

Looking ahead, Guterres urged all states to consider the implications of new weapons technologies and their compatibility with international law. Addressing an audience mainly of students, he emphasized the crucial
role of young people in addressing future weapons technology and promoting disarmament.

“I hope you will use your power and your connections to advocate for a peaceful world free from nuclear weapons, in which weapons are controlled and regulated and resources are directed towards opportunity and prosperity for all.”