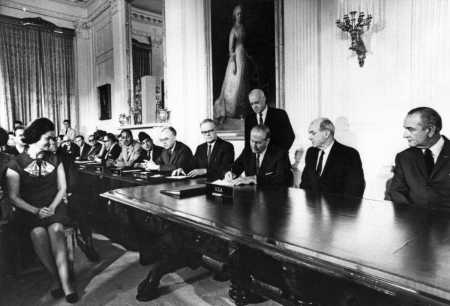 Article VI commits each of the states‑parties “to pursue negotiations in good faith on effective measures relating to cessation of the nuclear arms race at an early date and to nuclear disarmament, and on a treaty on general and complete disarmament under strict and effective international control.” Acknowledging the necessity of intermediate steps in the process of nuclear disarmament, Article VII allows for the establishment of regional nuclear-weapon-free-zones.

With its near-universal membership, the NPT has the widest adherence of any arms control agreement. Every five years, the 190 states-parties meet to assess progress on achieving key objectives and provide opportunities to discuss new measures to strengthen the treaty.

The negotiation and the indefinite extension of the NPT was not inevitable. Its future viability depends on continued leadership and action to realize its lofty objectives.

July 29, 1957: The International Atomic Energy Agency (IAEA) comes into existence with the mission of promoting and overseeing the peaceful use of nuclear technology. October 17, 1958: Ireland proposes the first resolution at the United Nations to prohibit the “further dissemination of nuclear weapons.”

December 4, 1961: The UN General Assembly unanimously approves Resolution 1665, which is based on the earlier Irish draft resolution and calls for negotiations to prevent the spread of nuclear weapons to additional states. March 21, 1963: In a press conference, President John Kennedy warns, “I see the possibility in the 1970s of the president of the United States having to face a world in which 15 or 20 or 25 nations may have [nuclear] weapons. I regard that as the greatest possible danger and hazard.” February 14, 1967: The Treaty of Tlatelolco, the first of five nuclear weapons free zones is negotiated. August 24, 1967: The United States and Soviet Union separately introduce identical draft treaties to the Eighteen- Nation Committee on Disarmament on preventing the spread of nuclear weapons. June 12, 1968: The UN General Assembly adopts Resolution 2373, endorsing the draft text of the NPT. The vote was 95 to 4 with 21 abstentions. July 1, 1968: The NPT is opened for signature and is signed by the Soviet Union, the United Kingdom, and the United States. China and France would not join the treaty until 1992.

March 5, 1970: The NPT enters into force with 46 states-parties. September 3, 1974: The IAEA publishes the “trigger list” developed by the Zangger Committee, identifying nuclear items that require IAEA safeguards as a condition of export. May 30, 1975: The 91 states-parties to the NPT hold the treaty’s first review conference. The treaty members decide to hold such conferences to review the implementation of the treaty every five years. January 11, 1978: States participating in the voluntary Nuclear Suppliers Group provide the IAEA with a common set of guidelines they will follow in making nuclear exports.

April 3, 1991: The UN Security Council adopts Resolution 687 requiring Iraq to eliminate its secret nuclear weapons program, which was revealed after the Iraqi defeat in the 1991 Persian Gulf War. July 10, 1991: South Africa accedes to the NPT. May 23, 1992: Belarus, Kazakhstan, and Ukraine sign the Lisbon Protocol committing 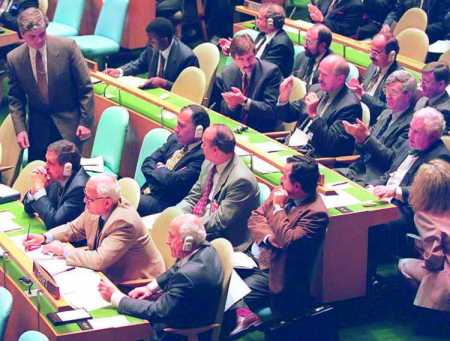 to join the NPT as non-nuclear-weapon states and relinquish the nuclear weapons they inherited from the Soviet Union. April 1, 1993: The IAEA declares North Korea in noncompliance with its safeguards obligations and refers Pyongyang to the UN Security Council. April 11, 1995: The UN Security Council adopts Resolution 984 acknowledging the unilateral pledges by the five nuclear-weapon states not to use or threaten to use nuclear weapons against non-nuclear-weapon states-parties to the NPT. May 11, 1995: At the fifth NPT review conference, the states-parties agree to the treaty’s indefinite extension and a package of principles and objectives on nuclear nonproliferation and disarmament to hold NPT states-parties, particularly the nuclear-weapon states, accountable to their commitments. September 24, 1996: The Comprehensive Test Ban Treaty is opened for signature. May 15, 1997: The IAEA adopts the Model Additional Protocol to enhance inspection authorities to guard against clandestine nuclear weapons activities. 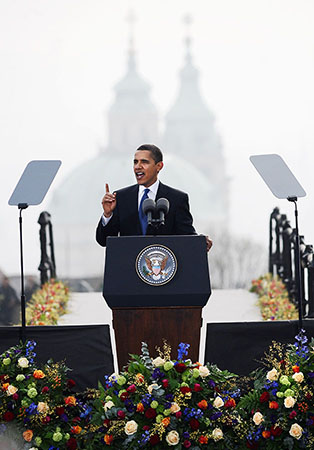 May 22, 2000: The NPT states-parties agree to a final document at the sixth review conference that outlines the so-called 13 steps for progress toward nuclear disarmament, including an “unequivocal undertaking by the nuclear-weapon States to accomplish the total elimination of their nuclear arsenals.” January 10, 2003: North Korea announces its withdrawal from the NPT. June 6, 2003: The IAEA issues a report detailing Iranian clandestine nuclear activities that Tehran failed to report to the agency, in violation of its safeguards agreement. December 19, 2003: Libya announces that it will dismantle its WMD programs, including a secret nuclear weapons program, and agrees to IAEA inspections and adherence to an additional protocol. September 19, 2005: North Korea commits to abandoning its nuclear weapons and programs and returning to the NPT and to IAEA safeguards in an agreement of the six-party talks on North Korean denuclearization. September 6, 2008: The Nuclear Suppliers Group agrees to permit trade in nuclear material and technology with India, despite that country’s status as a nonparty to the NPT and de facto nuclear-weapon state.

May 2010: The eighth NPT review conference agrees to 64-point action plan to strengthen implementation of the treaty. February 5, 2011: The New START agreement between the United States and Russia to cut strategic and offensive arms enters into force. It will expire in 2021 unless extended by mutual agreement. November 2012: The conveners (Russia, the United Kingdom, the United States, and the UN) of a conference to establish a weapons of mass destruction free zone in the Middle East announce that the conference will be postponed because not all states in the region agree on an agenda for the conference. March 2013: Norway hosts the first of three Conferences on the Humanitarian Impact of Nuclear Weapons, with participation from more than 120 states. The conferences focused on scientific findings on the impact of nuclear weapons use on humans, the environment, and global climate.

April 27–May 22, 2015: The ninth Review Conference for the NPT fails to reach consensus on a final conference document over differences about convening a conference on a WMD-free zone in the Middle East and disagreements over the pace of implementation of Article VI. A group of 107 states join the “Humanitarian Pledge,” which calls on states “to identify and pursue effective measures to fill the legal gap for the prohibition and elimination of nuclear weapons.” July 14, 2015: Iran and the P5+1 (China, France, Germany, Russia, the United Kingdom, and the United States) conclude the Joint Comprehensive Plan of Action to curtail Iran sensitive nuclear fuel cycle activities under strengthened safeguards. November 2016: UN General Assembly First Committee approves a resolution for a negotiating conference on a treaty on the prohibition of nuclear weapons by a vote of 123-38 with 16 abstentions. July 7, 2017: The second and final round of negotiations on the Treaty on the Prohibition of Nuclear Weapons concluded with states voting 122-1-1 to adopt the treaty. September 20th, 2017: The Treaty on the Prohibition of Nuclear Weapons is opened for signature.