In the wake U.S. President Donald Trump’s decision to terminate the Iran nuclear deal, Saudi Arabian Foreign Minister Adel al-Jubeir told CNN that “if Iran acquires a nuclear capability, we will do everything we can to do the same.”

The comments echo a similar warning from Saudi Crown Prince Mohammed bin Salman in March and could complicate U.S. efforts to negotiate and implement a civilian nuclear cooperation agreement with the kingdom. 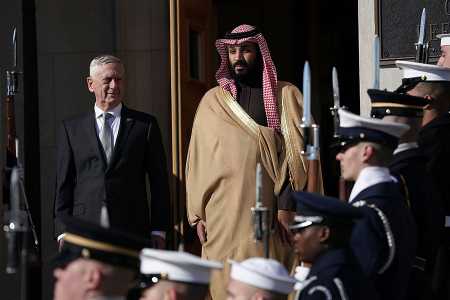 “Saudi Arabia does not want to acquire any nuclear bomb, but without a doubt, if Iran developed a nuclear bomb, we will follow suit as soon as possible,” Prince Mohammed told CBS News in a March 15 interview.

Saudi Arabia is a non-nuclear-weapon state-party to the 1968 nuclear Nonproliferation Treaty (NPT), which prohibits the kingdom from pursuing nuclear weapons development.

Although in the past some Saudi officials and members of the royal family have hinted at matching Iran’s nuclear capability, the recent statements from the Saudi leadership have been far more explicit.

For example, asked by Reuters in January 2016 if Saudi Arabia would seek to acquire nuclear weapons if Iran does, al-Jubeir said, “I don’t think it would be reasonable to expect me to answer this question one way or another.”

Saudi Arabia has been one of the few countries to praise Trump’s decision to withdraw from the Iran nuclear deal, which put significant, long-term constraints on Iran’s nuclear program.

When asked later that day to comment on al-Jubier’s comment, White House press secretary Sarah Sanders said, “Right now, I don’t know that we have a specific policy announcement on that front, but I can tell you that we are very committed to making sure that Iran does not have nuclear weapons.”

Long-standing, bipartisan U.S. policy has been to actively work against the spread of nuclear weapons to any country, friend or foe.

Saudi Arabia’s unabashed nuclear hedging comes as it continues to negotiate a civilian nuclear cooperation agreement, known as a 123 agreement, with the Trump administration. (See ACT, April 2018.) A 123 agreement, named after the section of the 1954 Atomic Energy Act that requires it, sets the terms for sharing U.S. nuclear energy technology, equipment, and materials with other countries.

Saudi Arabia has ambitious plans to generate nuclear power, but currently has no nuclear power plants. The kingdom plans to construct 16 nuclear power reactors over the next 20 to 25 years at a cost of more than $80 billion, according to the World Nuclear Association. It has solicited bids for the first two reactors and hopes to sign contracts by the end of this year.

A key issue in the negotiations is whether the United States will insist that Saudi Arabia agree to forgo uranium enrichment and spent fuel reprocessing as part of a 123 agreement. These activities are considered sensitive because they can be used to make fuel for nuclear power reactors and produce nuclear explosive material. To date, Saudi Arabia has resisted a ban and suggested that it seeks to make its own fuel.

Secretary of State Mike Pompeo said May 24 at a Senate Foreign Relations Committee hearing that the administration has told the Saudis it wants “a gold standard section 123 agreement from them, which would not permit them to enrich.”

Pompeo’s comments were the first indication that the administration is seeking such an agreement. Other administration officials had refused to say whether the United States was pushing a prohibition on fuel-making activity.

Previously, Energy Secretary Rick Perry had warned lawmakers that if the administration insists on nonproliferation standards Riyadh won’t accept, Russia and China would then win contracts to build reactors in Saudi Arabia and would demand less stringent nonproliferation and security standards than does the United States.

Bipartisan opposition to an agreement that does not block Saudi fuel-making continues to mount. “We need a gold standard, and I’m afraid this administration is already going down the road of, you know, doing something different than that,” Sen. Bob Corker (R-Tenn.), the chairman of the Senate Foreign Relations Committee, told National Journal last month.

Even if the administration does sign a 123 agreement with Saudi Arabia soon, Congress could run out of time to consider it this year.

Once the executive branch submits a signed cooperation agreement to Congress, lawmakers have 90 days in continuous session to consider the pact, after which it automatically becomes law unless Congress adopts a joint resolution opposing it. That time period is rapidly closing due to a shortened election-year calendar.