“It will take all of us working together – government officials, and diplomats, academic experts, and scientists, activists, and organizers – to come up with new and innovative approaches to strengthen transparency and predictability, reduce risk, and forge the next generation of arms control agreements.”
– Wendy Sherman
U.S. Deputy Secretary of State
June 2, 2022
Nuclear-Weapon States Spar at NPT Meeting

The international conference to prepare for the 2020 review of the nuclear Nonproliferation Treaty (NPT) was marked by quarreling among nuclear-weapon states and revised U.S. positions put forward by the Trump administration.

Tensions among Russia, the United Kingdom, and the United States about chemical weapons use in attacks in Syria and the UK, although not part of the NPT agenda, bled into the debate. An April 24 meeting among the five NPT nuclear-weapon states was unable to produce a consensus statement, but the states were united in opposition to assertions by non-nuclear-weapon states that the nuclear powers have not adequately complied with their NPT Article VI obligations to pursue nuclear disarmament negotiations in good faith. 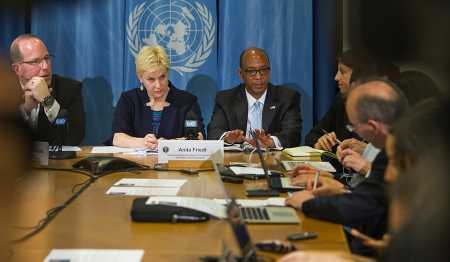 The Trump administration said that U.S. disarmament measures would depend on changes in the international security environment. A U.S. working paper, “Creating the Conditions for Nuclear Disarmament,” presented at the conference contends that the “easing of international tension,” “strengthening of trust,” and other specific conditions are prerequisites for progress on global disarmament.

Some of the specific conditions identified include the denuclearization of North Korea; Iran’s verified compliance with its nonproliferation commitments; the recognition of the right of Israel to exist; adherence by all states to the Model Additional Protocol established by the International Atomic Energy Agency; a moratorium on the production of fissile material; a halt to the increase and diversification of Russian, Chinese, and North Korean nuclear weapons arsenals; an improvement in the transparency of nuclear policies; the development of nuclear disarmament verification technologies; and compliance by all states with all international agreements, particular by Russia with the Intermediate-Range Nuclear Forces (INF) Treaty and by “some” states with the Chemical Weapons Convention.

The preparatory talks, held from April 23 to May 4 in Geneva, were divided into three thematic sections: disarmament, nonproliferation, and nuclear energy. At the conclusion, Adam Bugajski of Poland, the conference chairman, presented a factual summary that was not voted on or adopted by the conference as a consensus document.

Dozens of states emphasized their support for the Iran nuclear agreement, subsequently abandoned by U.S. President Donald Trump; advocated for the entry into force of the Comprehensive Test Ban Treaty (CTBT), including calling for North Korea to sign and ratify the treaty; and supported the negotiation of a fissile material cutoff treaty (FMCT). The United States announced that it will officially support work toward an FMCT.

Many states welcomed recent developments, including the diplomatic moves between North and South Korea and the July 2017 adoption of the Treaty on the Prohibition of Nuclear Weapons. Although France and Russia condemned the prohibition treaty, which is opposed by all the nuclear-weapon states, it was not a major point of contention at the conference.

NPT signatory states agreed on the right of all treaty parties to peaceful uses of nuclear energy and on the importance of nuclear security and nuclear safety. Many highlighted national initiatives to advance these goals.

The United States sparked a debate by stating in a working paper that “the NPT review cycle cannot be the primary mechanism for progress” on a zone free of weapons of mass destruction (WMD) in the Middle East but that regional states should work to establish the conditions needed to make progress on the initiative. At the 2015 NPT Review Conference, disagreement on this subject blocked agreement on a final consensus document.

The Arab Group and the Non-Aligned Movement were among those to reject the U.S. approach, stating that the decision during the 1995 NPT Review and Extension Conference to indefinitely extend the NPT would not have been possible without the resolution on the Middle East calling for a WMD-free zone.

Two nonproliferation statements were circulated for members to sign during the conference. One statement, distributed by Russia and China, expressed support for the Iran nuclear accord. Another denounced North Korea’s nuclear and missile developments and welcomed the recent diplomatic overture. Some states did not sign that document because it did not include a call for North Korea to join the CTBT.

The day before the conference’s end, Bugajski released his factual summary. Nuclear-weapon states largely accepted the document and did not point out changes to be made in the document.

Other countries suggested revisions to better reflect the views expressed at the conference. New Zealand, speaking on behalf of the New Agenda Coalition, recommended adding a reference to maintaining the moratorium on nuclear testing pending the CTBT’s entry into force and removing the word “some” when describing nuclear modernization programs that are not consistent with NPT obligations. Several states argued that the document should assert that states had “welcomed” the nuclear weapons prohibition treaty instead of “noting” it.

The conference selected Shahrul Ikram of Malaysia to be chairman of next year’s preparatory meeting, to be held in New York.