“[My time at ACA] prepared me very well for the position that I took following that with the State Department, where I then implemented and helped to implement many of the policies that we tried to promote.”
– Peter Crail
Business Executive for National Security
June 2, 2022
Firearm Export Rule Change Draws Criticism

With proposed rule changes affecting U.S. firearms exports, the Trump administration is drawing criticism from domestic gun control advocates and taking a further step to promote weapons sales, a hallmark of this presidency.

The proposed changes, announced May 14 and published in the Federal Register on May 24, are open for public comment for 45 days. If implemented, licensing for the export of nonautomatic and semiautomatic firearms and their ammunition will move to the Commerce Department from the State Department, which administers the U.S. Munitions List. 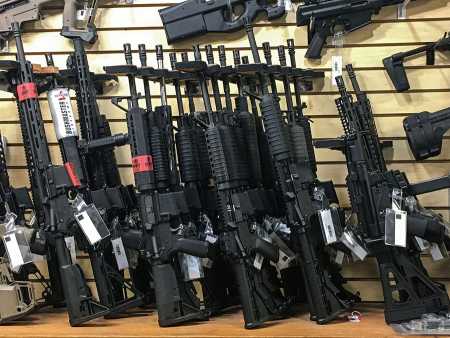 Critics say the change will loosen U.S. control over such exports to the benefit of U.S. gun manufacturers. “Small arms and light weapons are among the most lethal weapons that we and other countries export because these are the weapons that are most likely to be used to commit atrocities and suppress human rights, either by individuals, nonstate groups, or governmental security and paramilitary forces,” Sen. Ben Cardin (D-Md.) said on May 15.

Mike Miller, acting deputy assistant secretary of state for political-military affairs, said on May 22 that the change is justified because the weapons involved are “widely available, generally in retail outlets.” He noted that the categories of firearms moved to Commerce “will remain subject to export licensing requirements” and asserted that “these changes do not decontrol export of firearms and ammunition.”

In 2017 the administration notified Congress of more than $660 million of proposed firearms sales regulated under the munitions list, according to the Security Assistance Monitor. Some of those sales involved fully automatic weapons that will remain on the Munitions List, making it difficult to estimate the retail value of items moving to licensing at Commerce. Nonetheless, many industry groups welcomed the changes.

President Donald Trump has frequently touted the economic benefits of arms sales. In April, the administration issued a conventional arms transfer policy that emphasized the economic value of the defense industry broadly and promised the executive branch would “advocate strongly” on behalf of U.S. companies. (See ACT, May 2018.)

Miller said that “he wouldn’t necessarily pin [the proposed regulation changes] directly” to the new conventional arms transfer policy, but others including Democratic lawmakers have pointed to gun manufacturers and their supporters as the driving force behind the proposed rules. “I encourage the American people and relevant stakeholders to weigh in with the administration and speak out against the forces really driving this policy change—the gun lobby,” said Cardin.

“It’s clear the administration will do anything to appease the gun lobby, even if it means putting profits over the safety of people around the world,” Lloyd said.

Efforts to revise the U.S. Munitions List have been ongoing for decades, but early in the Obama administration, the Export Control Reform Initiative was launched, based on a review that found the United States was “trying to control too much.” Seeking to “strengthen the United States’ ability to counter threats such as the proliferation of weapons of mass destruction,” the administration made changes to 18 of the 21 categories of major weapons and technology controlled under the munitions list, moving many items to the Commerce Control List, with an idea of building higher fences around fewer items.

Changes to the first three categories, which cover close-assault weapons and combat shotguns, guns and armaments, and their ammunition and ordnance, were considered by the Obama administration, but never published. The Obama-era delay can be attributed in part to the frequent national attention drawn to firearms by mass shootings in the United States and a presidency more inclined to support gun control efforts. On May 15, Cardin called the decision to move forward with changes “politically tone deaf as our nation reckons with a gun violence epidemic.”

In September 2017, Cardin, joined by Sens. Dianne Feinstein (D-Calif.) and Patrick Leahy (D-Vt.), sent a letter to Secretary of State Rex Tillerson expressing concerns about the possible transfer to Commerce control, pointing to congressional action in 2002 that required firearms sales valued at $1 million or more be notified to Congress, a much lower dollar threshold than for other weapons. Items moved over to Commerce control would no longer be subject to such notification.

With the rule release, Cardin and others reiterated their concern regarding loss of congressional oversight and broader worries about how firearms fuel conflict.